Stretch the investment horizon to more than 10 years, and prospects brighten for optimum returns

The market volatility brought on by the COVID-19 pandemic may have blurred the visibility of investors around the world, but an old adage rings true now more than ever – fortune favours the brave.

And for investors in systematic investment plans (SIPs) of mutual funds, the intrepid move would be to stay the course than waver.

Indeed, a CRISIL analysis shows that despite the weak or negative returns seen in five to seven-year SIPs recently, pulling out at this stage would be counterproductive. Stretch the investment horizon to more than 10 years, and prospects brighten for optimum returns.

It is gloomy out there

As things stand, SIP investors in equity funds (based on a weighted average index created of CRISIL-ranked equity funds) face the likelihood of erosion of capital for investment horizons of up to five years, with returns in the range of -44 per cent for one year and -7 per cent for five years through March 31, 2020. 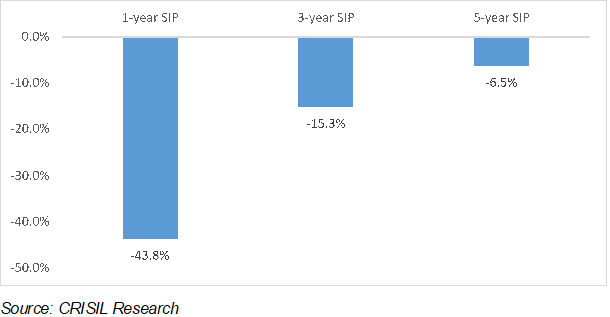 Negative returns in the short to medium term

That’s how it has been in every crisis. The current crisis isn’t the first, and won’t be the last.

Rewind to 2008-2009, when the global financial crisis had the world in its stranglehold. Or the dotcom bust of 2001. Both events saw extended bouts of volatility. And given the market meltdown, SIP returns over the short to medium term were in a similar negative territory as now. 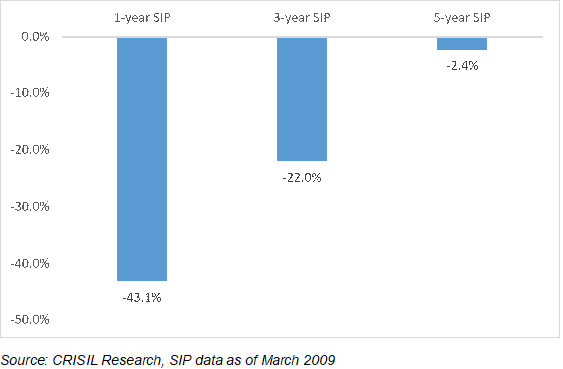 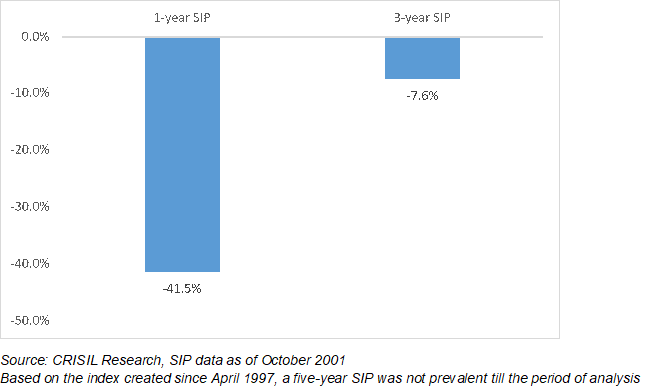 However, patient investors who held their nerve, went on to create immense wealth for themselves.

The following graph confirms the benefits of long-term SIP investment.

Why patience is a virtue As per CRISIL’s analysis, an SIP investor who stayed put from April 1997 to March 2020, ended up with 15 per cent annualised returns (XIRR returns). Sample the bounty – an investment of Rs 27.60 lakh (assuming Rs 10,000 per month) would have grown to over Rs 2 crore at the end of this period.

Indeed, CRISIL’s analysis of SIP investments across equity categories since 1997 reveals that the probability of positive returns increases as the investment horizon increases.

As can be inferred from the table above, while the average returns dip slightly as the investment horizon increases – because returns plateau over the long term – it is the variation between the maximum and minimum that flummoxes the investor.

The way to counter this? Just increase the investment horizon.

Our analysis shows that 44 per cent of the times, one-year SIPs have returned less than 10 per cent. However, as the tenure increases the probability of negative returns reduces to zero.

Similarly, the minimum return for a one-year SIP rises from a low of -58 per cent to a positive 4 per cent over a 10-year horizon and increases to a respectable 13 per cent over a 20-year term.

The takeaway for SIP investors

In financial markets, volatility is par for the course. Hence, investors need to be comfortable with it.

Just keep your eyes open on the benefits of SIP. For one, rupee cost averaging, which essentially means that one gets to buy more units of the fund when the underlying market is falling.

Also, resist the urge to stop your SIPs during market downturns for fear of value erosion, as this is the best time to adopt an accumulation strategy. And last but not the least, pick funds carefully and track your investments regularly.