Demonetisation: Digital payments, wallets on the rise; but cash is still king

Using digital methods for payments was a compulsion after demo, but has now become a habit for many

When the Prime Minister announced the banning of Rs 500 and Rs 1000 notes on November 8, 2016, there were bound to be far-reaching consequences. People across the country lined up at bank branches to return the notes with these denominations. Many faced a severe liquidity crunch for a prolonged period. Some even reportedly died standing in queues trying to withdraw the allowed quota of money from ATMs.

Among the outcomes envisaged by the government with the demonetisation move were reducing or eliminating the quantum of black (unaccounted) money in the country and making it a less-cash and digital-payments-driven economy. A host of other outcomes were expected from the note-ban move. The jury is still out on whether demonetisation helped the economy reboot itself or pushed it to a dire state.

There are critics and supporters with equally vociferous arguments. Be that as it may, one aspect on which the note-ban move did have a positive impact was the thrust in digital payments.

But it is also equally true that cash levels in the economy have risen considerably from the pre-demo days.

Here is a take on how digital payments and cash together have made joint inroads in the economy. 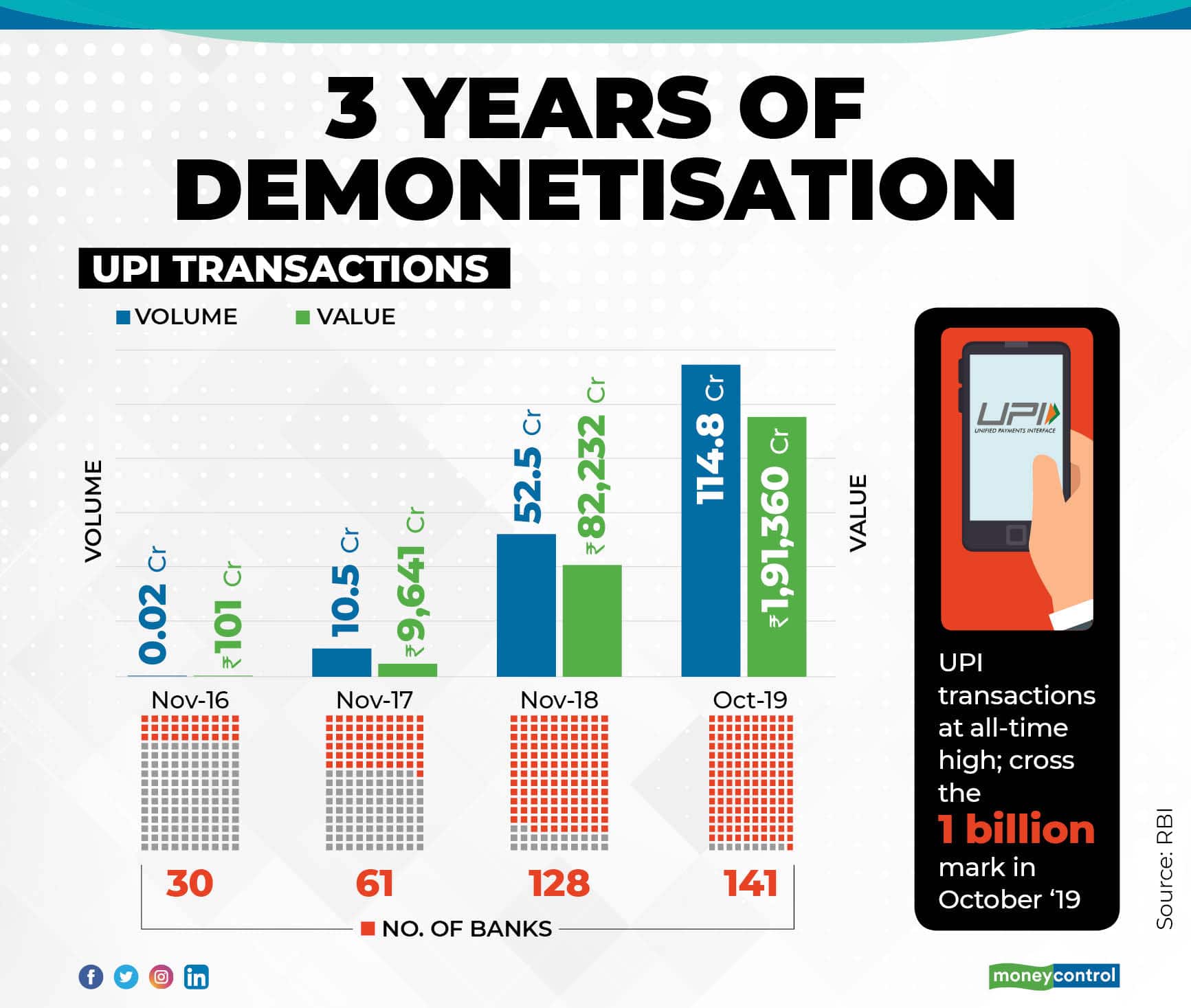 For Sheetal Kawali, 58, working with an NGO and residing in Pune, survival with limited cash in hand was challenging in the days after demonetisation. This was because, before demonetisation, a major part of her transactions (buying groceries, vegetables, etc.) was done only in cash like several other consumers in the country. In the first month after demonetisation, she had to keep the balance outstanding (unpaid) with the local grocery shop, vegetable vendors, etc. Then she learnt how to make digital payments from her children and started using debit cards for big-ticket expenses, mobile wallets to shop for monthly groceries and pay utility bills, net banking to transfer money to other persons, etc. Kawali says, “Using digital methods for payments started as a compulsion after demonetisation, but now it has become a habit that’s difficult to let go.”

Like Kawali, most urban consumers today prefer digital payments for a wide spectrum of uses and have given up on that constant of the past, cash. Kunal Bajaj, Head-Corporate Development and Investor Relations at MobiKwik, says, “Fintech innovation has facilitated faster acceptance in not only Tier-1 cities, but also in rural regions with low literacy, leading to growth in digital transactions post demonetisation.”

Digital payments, in general, have picked up, aided by large technology companies entering the fray. There has been solid growth in the volume and value of mobile wallet transactions in the last three years. According to the RBI, in FY19, mobile wallet transactions (in volume terms) stood at 414.2 crore, nearly six times more than the FY16 figure of 60.4 crore. In value terms, in FY19, it stood at Rs 1.83 lakh crore, nearly nine times higher than the FY16 figure.

Mobile payment applications such as Google Pay, PhonePe and Bharat Interface for Money (BHIM) using the unified payments interface (UPI) are also becoming popular among consumers. Transactions through UPI in value terms were at an all-time high in October 2019. It crossed Rs 1.91 lakh crore. With many companies offering mobile wallets and UPI payment applications, many people tend to use multiple apps for monetary transactions. Lovaii Navlakhi, Managing Director and CEO, International Money Matters says, “The move to digital post demonetisation had increased spending among my clients since they started using multiple mobile wallets for various transactions. They then struggled to keep an account of spending and the amount to load in each of these wallets.”

For instance, Mumbai-based marketing executive Komal Kalantri, 29, was using four mobile wallets after demonetisation. She got addicted to the use of mobile wallets to pay and earn cashback amounts from merchants. So, at the start of the month she would load Rs 5,000 to 7,000 in each of the mobile wallets.

Says Kalantri, “I was using the digital mode of payments haphazardly without keeping an account on my spending. There have been occurrences several times in the past, wherein my monthly savings have been blocked in mobile wallets and not earning interest income on that amount.”

On UPI apps, fraudsters are taking advantage of the ‘request money’ option. Imposters show interest in buying a product advertised on various online platforms and engage with the seller on a phone call. They make the seller of the product to transfer the money using UPI apps’ ‘request money’ option. There have been numerous instances of such frauds in the last one year.

To secure oneself from such fraudulent transaction Ambarish Kenghe, Senior Director - Product Management at Google Pay, says, “Users need to be mindful that a transaction which requires them to enter their PIN, is for sending money. Remember, receiving money requires no PIN. If you receive a payment request from someone whom you don’t know or cannot immediately identify, then you should immediately decline the request.” In a massive country such as ours, cash continues to be a preferred mode of payment. According to the annual report of the Reserve Bank of India (RBI) for financial year ended 2018-19, the amount of currency in circulation rose to Rs 21.1 lakh crore as on FY19 from Rs 17.9 lakh crore on November 4, 2016, a week before the note ban came into force. This represents an 18 per cent growth in cash circulation in the economy since demonetisation. “This data shows cash is back in the system. As 95 per cent of Indian retail expenditure is offline and unorganised, most people generally deal in cash payments,” says Anush Raghavan, Vice President – Cash Management, CMS Info Systems Ltd.

After the increased usage of digital modes of payment post-demonetisation, there are precautions to be taken. Kawali says, “It has taught to change the passwords of net banking and mobile wallets regularly to keep them secure from fraudsters.” Also, she now uses only one mobile wallet and analyses her spending pattern at end of the month. She now limits the amount that would be loaded and controls her expenditure.