COVID-19 hospital bills: Your health insurance policy will not pay these charges

Hospitals bills have costs for sanitation, PPE kits and steam inhalers. But your health insurance policy will not cover most of these charges

The second COVID-19 wave has hit the country hard and is clearly fiercer than the first one in 2020. Apart from the toll that it can take on our health, it can also severely dent our savings and throw all financial plans off-gear.

During COVID-19 treatment, disputes between hospitals and insurers on overcharging added to policyholders’ financial burden. As per industry estimates, policyholders across the country have been receiving only around 50-55 percent of their actual claimed amount for COVID-19 hospitalisation.

The major dispute in the initial days was over the use of PPE kits – which are classified as consumables – as also their costs. Later, insurers relented and started covering a part of these costs, which had also reduced over a period of time. However, certain restrictions continue. “PPE kits have become a significant portion of the hospital bill and any excess kits used above the specified limit are being disallowed,” says Shankar Bali, Joint Managing Director, Vidal Health TPA. 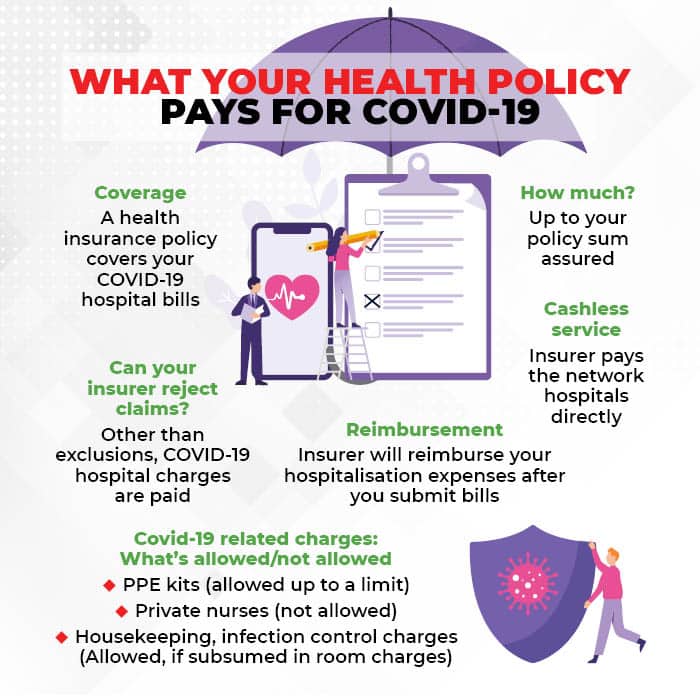 The General Insurance Council indicative rate structure specifies the cap on PPE to Rs 1,200-2,000 a day. “Multiple PPE kits are not covered in a day. Most insurance companies pay for one PPE kit per day or up to Rs 1,500-2,000 per day for a PPE Kit,” says Dr Sudha Reddy, Head, Health and Travel, Digit Insurance.

COVID-19 significantly pushed up the focus on hygiene and sanitisation standards in hospitals, which, in turn, passed on the increased costs to patients. Insurers, however, object to these charges being billed separately. “Some charges such as housekeeping, air conditioning, daily charts and infection control charges are to be subsumed into the room charges by the hospitals. These are not payable if billed separately,” says Priya Deshmukh-Gilbile, Chief Operating Officer, ManipalCigna Health Insurance. Similarly, some insurers do not pay for biomedical waste and sanitisation expenses either, if they are charged separately.

These apart, there are other expenses that your insurer might not cover. “There are certain items which are completely excluded from coverage. For instance, nebuliser kits, steam inhalers, thermometers, private nurses and attendant charges,” explains Deshmukh-Gilbile.

However, you could be luckier if you are covered under a group health insurance policy, which is typically facilitated by employers. “In the case of tailor-made group mediclaim policies, insurers are open to paying non-medical expenses, depending on the internal limits,” says Aatur Thakkar, Co-founder and Director, Alliance Insurance Brokers.

Do all insurance policies have exclusions?

Yes, most of the health insurance policies have some exclusions. These are expenses that your insurer has made it clear, will not be paid for. So, even if your hospital has levied such charges, your insurer will refuse to pay, forcing you to foot that part of the bills.

The insurance regulator IRDAI has standardised a whole host of exclusions – a list that all health insurers have to follow. Despite this, the COVID-19 crisis saw policyholders having to fork out a substantial amount from their own pockets, as hospitals and insurers locked horns over ‘unreasonable’ and ‘excessive’ charges levied by the former.

How are cashless claims settled?

With cashless claims, the insurer directly makes the payment to network hospitals on the basis of pre-agreed tariffs. However, COVID-19 patients have faced huge deductions – expenses that were not paid for by insurers – from their cashless claims too. In January, the IRDAI stepped in to advise insurers to enter into agreements with hospitals for COVID-19 cashless claims, using state government and GI Council rates are references.

“Cashless claims are being settled as per agreed tariff rates. Any charge which is mutually agreed by the hospital and insurer in the tariffs, are honoured,” says Deshmukh-Gilbile. Though the situation seems to have improved a bit for policyholders after IRDAI’s intervention, not all insurers have cashless agreements for COVID-19 in place due to disagreements over fair pricing. “After guidelines of the GI Council to curb excessive rates due to COVID-19, a lot of hospitals are not in agreement with tariffs proposed. Hence, insurance companies are negotiating afresh or settling claims as per the policy terms and conditions,” says Reddy.

How will my reimbursement claim be settled?

In a reimbursement claim, you have to submit your hospitalisation bills to your insurer, which will then scrutinise the documents and make the payment to you.

“The claims in which the hospitals have themselves billed as per the state or local body rates are settled as per the submitted bills. Wherever the hospitals submit non-GI Council bills or open bills, the same are settled as per policy terms and conditions,” says Deshmukh-Gilbile. However, health insurance policies contain a ‘reasonable and customary’ charges clause.  So, reimbursement as per policy terms and conditions could mean adhering to ceilings imposed by government bodies or the GI Council, leading to partial claim settlement.

Preeti Kulkarni is a financial journalist with over 13 years of experience. Based in Mumbai, she covers the personal finance beat for Moneycontrol. She focusses primarily on insurance, banking, taxation and financial planning
Tags: #Health Insurance #insurance #video
first published: Apr 16, 2021 10:21 am