New to equity mutual funds? Try this low risk fund to get you started

The scheme’s low volatility has led to superior risk-adjusted returns when compared to those of peers over the long term.

If you are a newbie investor willing to foray into mutual funds, the aggressive hybrid category may be a good option, as you get a good mix of equity and debt.

As mandated by SEBI, aggressive hybrid funds allocate 65-80 per cent of their corpus to equity investments, while the rest is invested in debt instruments. The higher allocation to equity can help deliver good returns in the long run. Debt exposure helps cap losses in market downturns. These funds are treated like equity funds for taxation purposes.

Though the fund follows a multi-cap approach, it invests more in high-quality large-cap stocks, helping to reduce the risk while generating better returns. All these steps helped the fund become a low-risk scheme within the category. Risk, as measured by the annualised Standard Deviation (SD), shows that CREHF is the least volatile fund among peers. The annualised SD calculated from the last seven years data of CREHF was 12.5 percent, while for the category, it was 15.2 percent.

CREHF’s equity portfolio strategy is divided into two parts. About 70 percent comprises ‘compounders,’ which are stocks with competitive advantage in businesses showing high earnings visibility and sustainability. The rest are ‘alpha generators,’ which are re-rated businesses and cyclical players.

On the debt side, the fund follows a blend of accrual and duration strategies. It is one of the few schemes in the category that invests only in the highest-rated debt instruments. The average maturity of the debt portfolio as of May 2021 was 1.76 years.

Consistent performer over the long run

CREHF’s performance during both bull and bear phases has been notable (see graph). It delivered mediocre returns during 2016, given its allocation to some troubled sectors, including pharma and software. However, the fund made a comeback in 2018, and ranks among the top five, thanks to its prudent investment strategy. 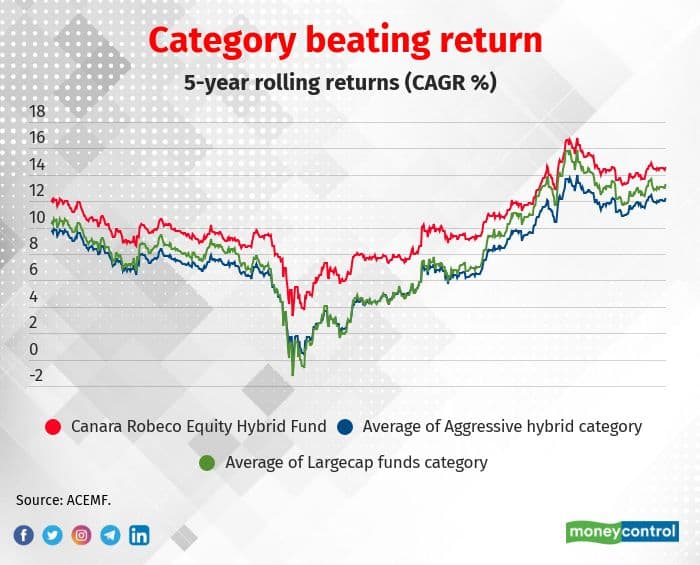 Rolling returns are a better way to assess a fund’s performance as they cover multiple entry and exit points. The five-year rolling returns, calculated from the last seven years’ NAV history show that CREHF gave 10.2 percent CAGR returns, as opposed to the aggressive hybrid category average return of 7.8 percent. Meanwhile the large-cap category gave 8.3 percent returns in the same period. The scheme’s low volatility has led to superior risk-adjusted returns when compared to those of peers over the long term. It has also consistently beat the average returns given by large-cap funds over the long run.

Saji Pulikan, co-founder and CEO of LitMfin.com says, “Aggressive Hybrid funds work well for middle-aged investors and retirees, especially when they switch from equities to debt as per their retirement expectations. That can give a smother ride to their equity allocations plus create alpha to beat inflation”.

The minimum time horizon for holding should be five years.