Nirmala Sitharaman announced that individuals earning more than Rs 5 crore a year would pay a surcharge of 37.5 percent on their tax, over above their 30 percent marginal tax.

Finance Minister Nirmala Sitharaman today announced that the tax rate on the super-rich would go up, with a peak effective tax rate of 42.7 percent being higher than the US' 40 percent.

Presenting her maiden Budget, Sitharaman said that individuals earning more than Rs 5 crore a year would pay a surcharge of 37.5 percent on their tax, over above their 30 percent marginal tax. This comes up to an effective rate of 41.1 percent rate (Rs 30 tax on every Rs 100 earned, plus another 37 percent on Rs 30, which is Rs 11.1). Add to that various cess, and the peak tax rate comes up to 42.7 percent. 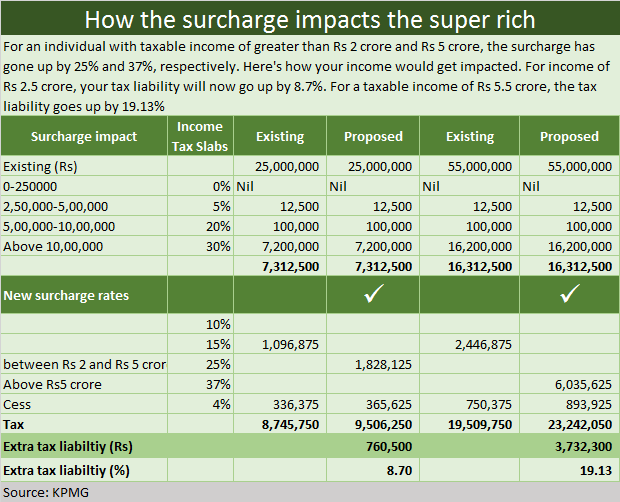 The surcharge on those earning between Rs 2 and Rs 5 crore increased to 25 percent, bringing their effective tax rate to about 39 percent.

The measures are in lieu of the rising income levels, announced Finance Minister Nirmala Sitharaman, during her maiden Union Budget on Friday.

The timing of the announcement could potentially pose another problem for taxpayers.

"The significant increase in taxation for those earning above Rs 2 crore means that the advance tax installment paid for the first quarter in June 2019 would be lower than the actual tax installment post the Budget announcements. Hence, these high-income earners would be required to pay interest on the additional amount of tax as well for the first quarter," chartered accountant Paras Savla points out, unless clarity is issued on this later.