In October 2019, the Reserve Bank of India (RBI) had announced that all banks should adopt an external benchmark for pricing their floating interest rate loans. So, banks have gradually started linking their floating rate loans to the repo. State Bank of India (SBI) reduced its external benchmark-based rate (EBR) by 25 basis points (bps) from 8.05 per cent to 7.80 per cent for existing home loan borrowers. Also, new borrowers will get loans at an interest rate starting from 7.90 per cent per annum compared to 8.15 per cent earlier. These new interest rates would be effective from January 1, 2020. The present rate cut is a result of the repo-rate cut announced on October 4, 2019 by the RBI. According to RBI guidelines, banks are required to reset their external benchmark based rates at least once in three months.

Let’s say you apply for a home loan of Rs 1 crore with 20 years tenure. The applicable interest rate at present is 8.5 per cent, depending on your credit score. The new interest rate applicable from January 1, 2020 will be 8.25 per cent. So, the monthly instalment payable will be Rs 85,207, down from Rs 86,782. So, there is immediate saving of close to Rs 18,900 annually with the reduction in interest rates. Over the tenure of the loan, you will save around Rs 3.78 lakh. 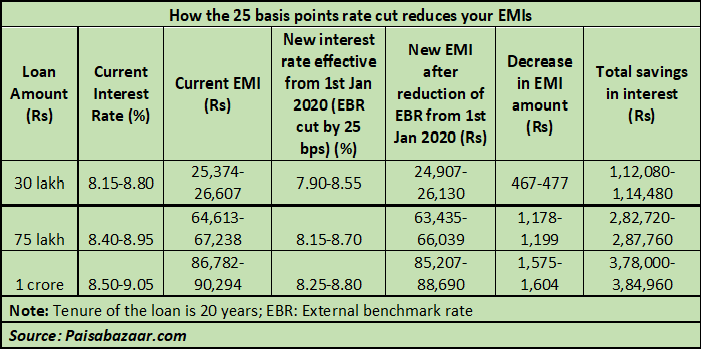 The table below gives details of what new home loan borrowers stand to gain.

Whenever rates come down for existing borrowers there are two options offered by banks. One is to decrease the EMI and keep the loan tenure unchanged. The other alternative is to reduce your loan tenure and keep the EMI unchanged.

Shalini Gupta, Co-founder and Chief strategy officer of MyLoanCare.in has this piece of advice: “Service the EMI with the same amount despite the repo rate cut announced by the RBI. This is because interest outgo on a short tenure loan is significantly lower than a longer tenure loan.” By paying the same EMI, you may able to close the loan account faster.

Denny Tomy, Business Head at loan advisory firm, theloanguru.in adds, “A borrower can build a separate corpus by decreasing the EMI and invest those savings in mutual fund schemes that give higher returns than the interest being paid to the bank for the home loan.” Also, the corpus built over five years, for instance, will be helpful in paying a lump-sum amount and reducing the principal outstanding.

Rate cuts not fully passed on

Rahul Agarwal, Director of EZ Wealth says, “Given the flexibility banks have to charge a spread/mark-up over and above repo rate, considering other costs incurred by banks, the final lending rates are yet to come down in a commensurate manner.”