Upcoming Event:Join us for the exciting discussion with Danone on role of nutrition, protein in working professionals’ quality of life on July 31, 3pm.
you are here: HomeNewsBusinessPersonal Finance

The year 2019 has been a roller coaster ride for both global and domestic markets, driven by the divergence in economic data and the performance of the markets.

Globally, markets have been concerned about Brexit and its impact on the Euro Zone, and the US-China trade tensions. Global trade was significantly impacted by both these events. Hence, the IMF forecasts global GDP growth at 3 per cent in 2019, down from 3.6 per cent in 2018.

However, global central banks turned accommodative, with the US Fed cutting rates thrice and the ECB once in 2019 apart from reversing its balance sheet tightening program. This increase in liquidity caused money to flow into riskier assets, thus supporting the global equity rally in 2019. On the other hand, bond yields in certain parts of the world have fallen to the negative territory. Currently, more than $15tn worth of bonds are selling at a negative yield globally.

In India, after the IL&FS default in September 2018, most non-banking finance corporations (NBFCs) found it difficult to raise capital in 2019. Thus, they had to either offload their existing assets or reduce their lending book, or in some cases, both. This led to a significant credit squeeze in the system. This, along with decline in consumer demand in India and manufacturing slowdown caused India’s GDP growth to decline to 4.7 per cent in Q2FY20, the slowest growth in the last six years.

Even as the GDP growth slowed down, the Nifty Index touched fresh all-time highs in 2019. The rally was led by a handful of index heavyweight companies where earnings growth continues to remain relatively robust. However, if one looks at the broader market, the story is different. Year-to-date, while the Nifty is up 11.8 per cent, the midcap index is down 5.2 per cent, while the small-cap index has declined 11.8 per cent. Midcaps have corrected by nearly 20 per cent from their highs of early 2018 and small-caps have fallen in excess of 37 per cent, even as the Nifty is up more than 15 per cent during the same period. 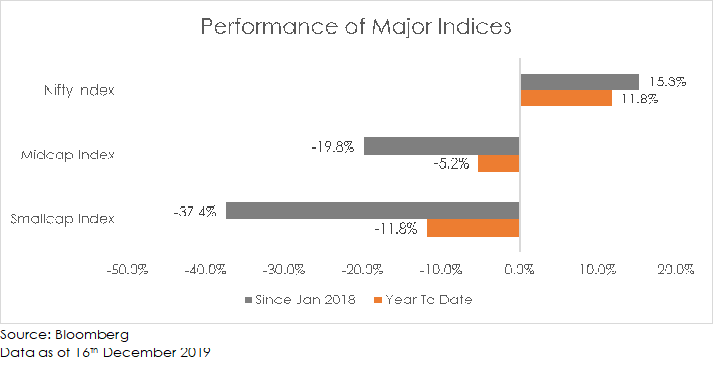 The ripple effect of the IL&FS default was also seen on the Indian fixed income market. Weaker NBFCs that found it difficult to raise money in 2019 were downgraded and a few of them even defaulted. Additionally, companies in which the promoter had pledged equity to invest in other businesses also faced concerns with many either defaulting or being downgraded. Thus, many credit risk mutual funds that had exposure to these entities suffered badly this year.

The Reserve Bank of India (RBI) also reduced its rates by 135bps in 2019, in line with other global central banks. This led to a fall in the 10-year Indian government bond yields from 7.4 per cent at the start of the year to 6.8 per cent currently. However, the translation of lower interest rate into lower lending rates has been relatively slow so far.

Looking ahead into 2020, we see some positive developments. The Boris Johnson led Conservative Party won a clear majority in the recently concluded UK elections. This should provide clarity on the roadmap to Brexit. It appears that the US and China are also making some progress towards a trade deal. With US presidential elections due in 2020, President Trump might want to push for a trade deal. This could provide a positive trigger for global equities.

Domestically, the government has taken some measures to get the economy firing again. The Union budget in 2020 would be closely watched, as expectations are high. If the budget fails to deliver, there could be a significant sell-off in the markets. We have seen earnings disappoint for many quarters now. Given the high valuations of Indian equities, a disappointment in earnings in 2020 would be a major negative for the market.

Gold was a good tactical bet at the start of the year. It made fresh all-time highs and rose by more than 20 per cent this year, led by increased global volatility as money moved to “safe-haven” assets. With volatility in global markets declining and fall in ETF gold holdings, we believe gold prices could remain range-bound in the coming year.

Overall, with overpriced markets, weak corporate earnings & economic data, there is reduced margin of safety. The market gets its adrenaline by the surge of liquidity provided by global market participants hunting for yields. Much would depend on the direction of economic reform agenda to revive investment and boost the confidence of Corporate India. Some of these positive triggers would revive the breadth of the market and ensure participation across Market capitalisation.