16-75% of their annual salaries: That’s how much SEBI fined Franklin Templeton’s personnel

The Securities and Exchange Board of India (SEBI) levied a penalty of Rs 15 crore against eight employees of Franklin Templeton and its trustee company. The fine was for lapses in handling of the debt schemes, which were eventually wound-up. Sanjay Sapre, the fund house’s chief executive officer, and Santosh Kamath, chief investment officer-fixed income, were fined Rs 3 crore each. The remaining five debt fund managers were penalised Rs 1.50 crore each. The question is: how big or small are the fines really?

Along with the fund managers, the others who were fined were the trustee company and the compliance officer.

The compensation disclosures on FT AMC’s site show that the SEBI penalty of Rs 2 crore will amount to 16.3 percent of Santosh Kamath’s earnings of Rs 12.26 crore during October 1, 2019-September 30, 2020.

To be sure, these earnings include the variable pay, to be given on meeting the objectives set in the previous financial year (October 2018-September 2019). 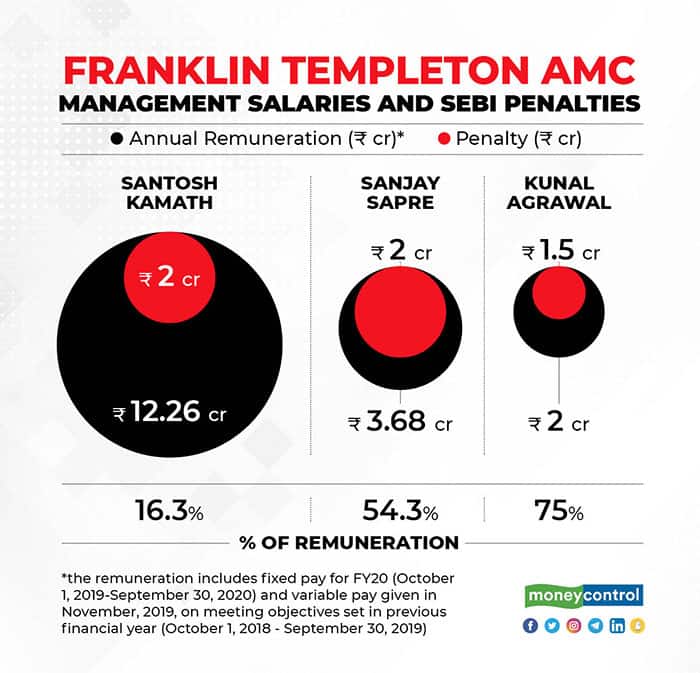 As the SEBI order points out, all debt fund managers reported to Kamath, who is the CIO-fixed income at FT AMC.

SEBI has levied penalties on other debt fund managers of FT AMC as well. Most of these fund managers co-managed the wound-up debt schemes with Kamath.

The remuneration of the other fund managers have not been disclosed.

SEBI mandates that fund houses disclose the remuneration of senior officials, including the CEO and fund managers, publicly. The salaries of all those who earned Rs 1.02 crore or more annually had to be stated to the investors and public at large.

More than investors, public disclosure of high-income earners in a fund house also helps analysts and industry observers evaluate their fund managers. The spotlight may make fund managers more prudent. Analysts also look at how the KRAs (key result areas) of important employees are linked to the performance of the funds.