Opinion | Why is popcorn so expensive at the movies?

Recently, there was quite a furore in India about the steep pricing of food items at multiplexes. Several public interest litigations were filed against multiplexes and the matter is now being heard in the Supreme Court. While the law will decide on the subject, it might be worthwhile to look at the popcorn price issue through a broader lens than just how much popcorn costs and how much it is sold for in multiplexes.

As a consumer, there is no question that food items are expensive at multiplexes when compared to a regular food outlet and yet I would disagree with the accusation that at an aggregate level multiplexes are profiteering. The best measure to put that accusation to bed is the return on equity (RoE) that multiplexes make i.e. what returns are providers of capital making on their investment.

Average RoE for the two leading multiplex chains in India, PVR and Inox Leisure for the past five years is 10.8 percent and 8.1 percent respectively. These numbers barely match the cost of capital in India and in the context of the fact that utilities like National Thermal Power Corporation and Power Grid are allowed to make 15.5 percent RoE in India, they don’t seem exorbitant at all.

This begs the questions as to why does a fairly consolidated industry (the top four chains account for about 70 percent of multiplex screens in India) have to charge steep prices for food & beverage (F&B) items and yet not make a respectable return on investment. The answer lies in some of the other cost items that multiplexes have to contend with. The largest is obviously content cost i.e. the amount that multiplexes have to pay the film distributors/producers out of the box office collections.

Chart 1 shows that this number at 43-45 percent of net box office collections has remained quite stagnant over the past few years. In other words, even a progressively consolidating multiplex industry hasn’t been able to weigh on content producers/distributors to extract lower costs for themselves which can be passed on to the consumer through lower ticket prices and/or lower F&B prices. 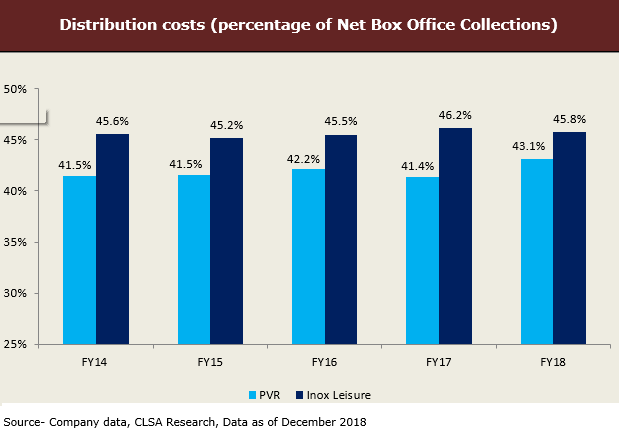 If we go back in the film making value chain, although numbers aren’t available in public domain, it’s not that the producers of movie content are making a ton of profit. There were news reports about the retreat of the likes of Balaji and Walt Disney from the movie-making business in India due to mounting losses. So the consumer is paying through her nose for the popcorn and yet neither the multiplex nor the creator of content is making a lot of money. So where does this buck really stop?

Clues to this might lie in the annually published list of highest paid movie stars in the world. Chart 2 shows the lists for the last two years with Salman Khan and Akshay Kumar making it to the list in both years. Put differently, if you look at the Global Fortune 500 companies, the highest ranked domestic Indian company in terms of sales stands at Number 137 ( Indian Oil) and Number 111 (HDFC Bank) in terms of market cap and rightly so. HDFC Bank, for instance, which caters exclusively to the Indian market cannot justifiably be a Fortune Top 10 company (yet), given the size differences between the Indian and large developed economies. In the context of their potential market, Indian movie stars are clearly overpaid and content producers need to think about this urgently especially with the waning box office appeal of these A-listers.

The other thing I find perplexing is the amount of money movie producers spend on marketing the movie. In industry parlance, this is called Publicity & Advertising (P&A) cost. Again, while industry-level data is not available in public domain, we trawled through a few trade websites to look at 25 recently released movie titles where data was available, to find that on average, a whopping 30 percent of the total cost of a movie is spent on P&A.

So what’s the conclusion here? Movie producers will have to aggressively cut costs especially on what they pay talent and P&A spends. Multiplexes will have to negotiate harder to cut down the share that they pay movie producers while at the same time maximising other sources of revenue like movie advertising and share of fees from ticket aggregators. And all this will have to feed through to lower ticket and F&B pricing.

For a movie-crazy nation like India, it’s surprising that like-to-like tickets sold have not grown at all for PVR and Inox over last few years and I think, hefty ticket and F&B prices would bear the bulk of the blame. As alternative means of affordable and convenient entertainment make surprisingly fast inroads in India, if movie-going has to remain relevant, entire cost structures have to deflate and ultimately lead to a lower cost to consumers and higher footfalls.  A lower popcorn price is the best Diwali / Eid / Christmas gift that our Khans, Kapoors, Kumars and Singhs can give their audiences.
Swanand Kelkar is managing director at Morgan Stanley Investment Management. Views are personal.