Amazon Flex, Dunzo, Ola, Uber and PharmEasy scored 0/10 on the Fairwork India Ratings 2022, which ranks the companies based on the working conditions of gig workers on the minimum standards of fair work. Urban Company scored the highest among the platforms ranked, scoring 7/10.

This comes at a time when companies like Ola and Uber are facing regulatory challenges, longer wait times, and driver demands to raise fares and reduce app commissions. While companies such as Swiggy and Dunzo have faced worker protests over rate changes, incentive changes, and the duration for which workers must remain logged in.

Gig workers are not employees of the company for which they work, and thus are not salaried or entitled to the same benefits as salaried employees — and are compensated on a per-gig basis. For example, this is a Swiggy delivery executive or an Uber driver, where the platform assigns the tasks and takes a commission per task.

Urban Company scored the highest with 7 out of 10, followed by Bigbasket with 6, Flipkart and Swiggy with 5, Zomato with 4, Zepto with 2, Porter with 1, and the remaining companies with a score of zero. 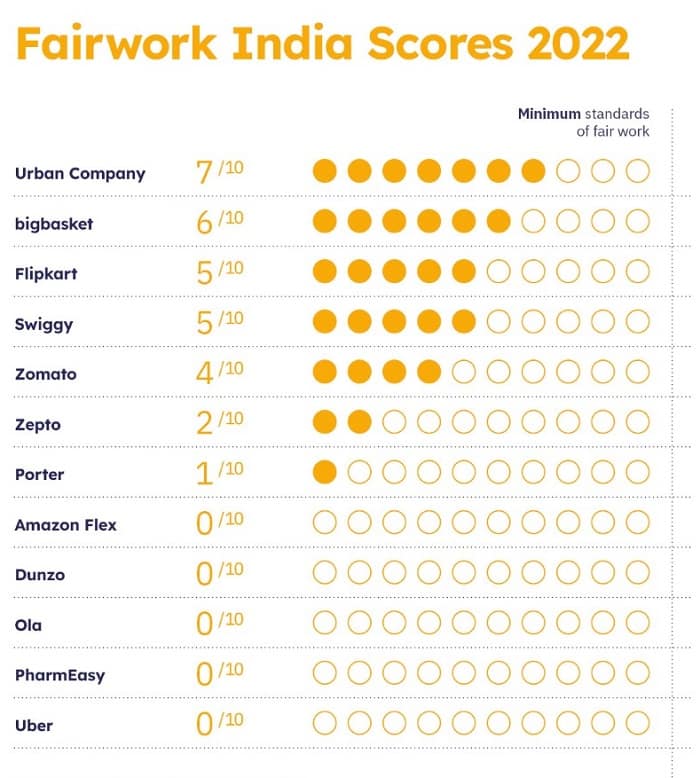 This represents an improvement for Urban Company, Bigbasket, Swiggy, and Zomato compared to the 2021 ratings. Uber and Ola continue to receive a score of zero, while Amazon, Dunzo, Flipkart, PharmEasy, and Porter have seen a drop in their score.

According to the Fairwork report, the same three platforms that earned points for fair pay last year—Bigbasket, Urban Company, and Flipkart—also earned points this year. No other platform, the report said, publicly committed to or provided evidence to show that the workers earn the hourly local minimum wage after work-related costs.

According to the report, Urban Company and Bigbasket have agreed to reimburse the difference after costs between a worker's hourly earnings and the hourly local minimum wage.

Flipkart and Urban Company have committed to basing their pricing structure for workers on the hourly local minimum wage after costs, with Flipkart looking to hold its third-party service providers to the same standard.

The report said that even though workers and worker groups have asked for a stable income, platforms have not been willing to commit to a minimum wage policy and have been "uncompromisingly unwilling to recognise or negotiate" with any group that represents workers.

None of the 12 platforms scored a point for fair representation.

On the subject of fair conditions, the report looked at the risks faced by these gig workers and the measures taken by the companies, such as in the case of an accident.

Bigbasket, Flipkart, Swiggy, Urban Company, and Zomato were awarded a point for their accident insurance policies, efforts to improve the claims process, and the availability of emergency helplines.

Bigbasket, Swiggy, and Urban Company were awarded a point for providing monetary support to workers who are unable to work due to illness and whose standing on the platform are unaffected.

Seven of the twelve companies had fair contracts, in which contracts are easily accessible and workers are informed of policy changes ahead of time.

While some of the companies have a grievance redressal process, the report said that only Urban Company had regular external audits to check for biases in its work allocation systems, in addition to adopting policies against the discrimination of its platform workers.

“The promise of flexibility of the digital platform economy raises as many questions about livelihoods as it offers opportunities. We hope the Fairwork report provides the basis for an interpretation of flexibility that allows for not merely the adaptability that platforms seek, but also the income and social security that workers lack", the researchers of the report said.

This comes on the heels of a report by NITI Aayog, which stated that the gig workforce was ushering in a new economic revolution and examined the sector's current size, job generation potential, and offers recommendations for the sector.

The Fairwork report also finds flaws in the think tank's report, alleging that the urge to support the growth of the platform economy is "based on an inadequate analysis of the pre-eminent characteristic of platform work, flexibility: of the forms it takes, or its varied consequences for platforms and workers."