Currently the company is operating at almost 100% capacity utilisation and this is precisely a reason that company’s revenue growth in Q3FY18 was mere 14%.

Currently, the company is operating at almost 100 percent capacity utilisation, and this is precisely a reason the company’s revenue growth in Q3FY18 was mere 14 percent.

But, what is interesting is the company has increased contribution of the high-margin value added products to 22-23 percent of the revenues, backed by 169 patents, which is highest in the industry. That along with reduction cost as a result of economies of scale, led to significant improvement in the margins. In Q3FY18, the company reported 24.15 percent operating margins, which were up by 496 basis points on year on year basis. That apart, it saved close to Rs 5 crore in interest cost as a result of lower interest outgo. Improvement in margins and lower interest cost helped company to post robust 82 percent increase in net profits to Rs 99.2 crore. 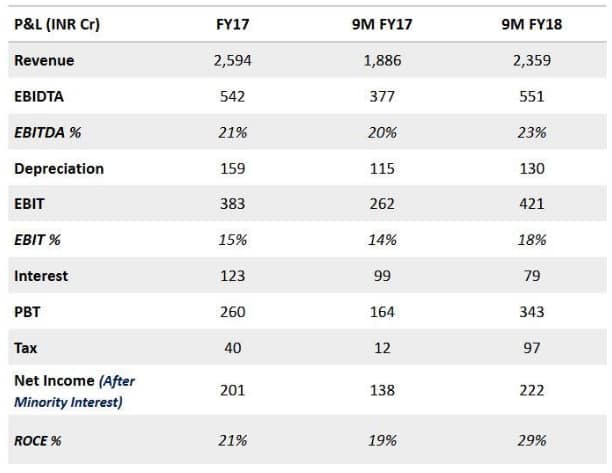 Moreover, despite ongoing capex the company reported 29 percent return on capital and maintained healthy debt to equity at around 1 times. 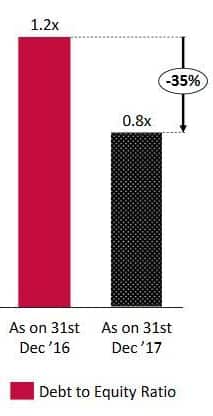 The company is hopeful of maintaining growth momentum and margins given the favourable demand supply situation globally and product mix which will remain tilted towards the value added products. While addressing the analysts’ earning call, the management expressed the company is expecting more order to get finalised and in the coming months as domestic telcos and government-related projects kick start. That apart, globally it is expecting strong demand from the telcos that are investing heavily on 5G technology infrastructure. Sterlite generates close to 60 percent of its revenues from the export market, and has been a beneficiary of demand and better pricing environment.

While the earnings visibility is improving and return ratios are favourable, part of this optimism is also reflected in in share prices. The stock at Rs 380 is trading at about 36 times its estimated earnings and 11 times book of FY19. Considering valuations are slightly at the higher end, investors should have modest expectations in the medium to short term.
Jitendra Kumar Gupta
Tags: #Companies #Moneycontrol Research #stock views
first published: Jan 18, 2018 11:20 am