Upcoming Webinar:'COLLECTIVE FORCE: India Inc. unites to tackle the second wave of COVID-19' on June 23, 11 am. Register Now!
you are here: HomeNewsBusinessMoneycontrol Research

- The stock can be looked at for investment

Shoppers Stop’s performance in the quarter gone by was subdued. Nevertheless, we are optimistic about the company’s prospects. This can be attributed to network augmentation initiatives, a large loyalty base, impetus towards non-apparel products and the ability to fund capex through internal accruals.

The retailer is part of the K Raheja Group. As of June end, it operated 83 departmental stores in 40 cities across India. Its aggregate retail area (across all formats) is 4.24 million square feet.

Previously, companies accounted for lease rental expenses as a separate operating expense or included it under the 'other expenses' head.

Ind AS 116 came into effect from April 1, 2019. Starting FY20, in connection with properties taken on lease, for the lessee (Shoppers Stop), the rent will be bifurcated between depreciation and interest over the period of the agreement.

- Omnichannel sales grew considerably faster than sales in other segments

Negatives
- From an overall perspective, revenue was flat YoY. Denim sales were also not up to the mark
- Employee costs, as percentage of sales, increased YoY

- PAT margin dipped due to the Ind AS impact 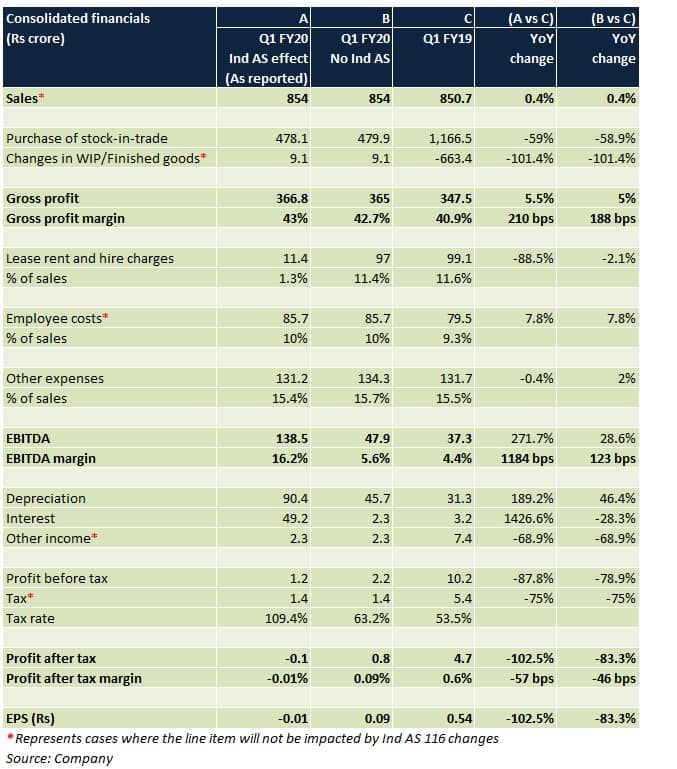 To expand its geographical reach, 5 Shoppers Stop department stores are likely to be opened in FY20. Most of these would be in tier 2 and 3 regions, given the immense headroom for growth and untapped potential out there.

Shoppers Stop has some marquee beauty brands under its umbrella. Since premium products such as these are high-margin in nature compared to other product categories, the management is focusing on increasing the proportion of beauty sales to overall consolidated revenue.

Store additions are slated to gain momentum across all brands. As of Q1 FY20 end, Shoppers Stop had 120 outlets in total. The company launched Arcelia, India's first luxury beauty concept store, in Hyderabad in April-June. The beauty segment constituted 15.9 percent of the June quarter top line.

The product portfolio in this segment will cover skincare, colour, fragrances and cosmetics. Apparently, though the target audience is women, good traction has been seen in male grooming, too.

A steady increase in the FCCLP base hints at better prospects of organic conversions (ie. the same set of customers visiting Shoppers Stop's outlets more often for making purchases). This may also help achieve better same-store sales growth, eventually leading to operating leverage. The possibility of a cardless FCCLP is also being considered.

Shoppers Stop is present across more than 400 fashion brands and 32 fashion categories. Approximately, 60 percent of the yearly sales are derived from the company’s own brands. By virtue of investments in design studios, sampling units and testing labs, Shoppers Stop’s sales from private labels are anticipated to go up. In the period under review, 12.2 percent of the sales were from this category. By combining the benefits of digital and brick-and-mortar retailing, Shoppers Stop is becoming a force to reckon with. In the three months to June, the company’s website was visited by over 14.6 million viewers and its mobile app was downloaded in over 6 million phones. At the moment, close to 25,000 pin codes are being served by all Shoppers Stop outlets.

The share of non-apparel products to consolidated turnover is gradually going up. This will be crucial in mitigating product concentration risks (ie. too much dependence on clothing) and generating healthy asset turns (since non-clothing merchandise is sold more or less consistently throughout the year).

To attract more footfalls, the following initiatives are being prioritised:- Though the above-mentioned pointers appear convincing, in light of the ongoing consumption slowdown, we see profitability decelerating during the remainder of FY20.

Heavy advertising spends and price cuts may have to be undertaken to keep revenue traction intact. At 33 times its FY21 projected earnings, the valuation appears optically expensive because of lower earnings estimates. After trading in a range-bound manner (Rs 450-500) since October 2018, the stock has corrected sharply in the past 12 days because of market weakness and is trading at a level which is whisker away from its 52-week low price. Investors may, therefore, want to consider gradually building up positions in the stock.