Tune in on 17th July for the Small Business Virtual Summit with Cisco. Register now!
you are here: HomeNewsBusinessMoneycontrol Research

There is a good growth potential in affordable housing segment which RHF can capitalise on as it extends housing loans and loans against property to salaried and self-employed individuals in tier II and tier III cities. However, scalability is a key concern for the company.

Close
Soft growth in home market
RHF’s overall loan book increased to Rs 11,342 core as of June-end, a moderate growth of 13 percent YoY. This is mainly attributable to weak growth of 8 percent YoY in its home market - Tamil Nadu (TN), which accounts for 57 percent of loan book. While strong traction was seen outside TN with rest of India loan book growing by 19 percent YoY, recovery in TN is crucial for sustained growth momentum. 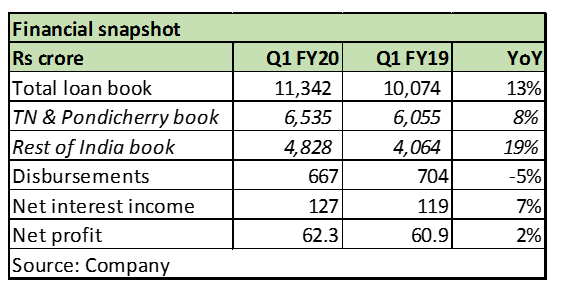 Disbursements were down by 5 percent YoY, but still RHF could manage to report loan growth as repayment fell to multi‐year low. According to the management, lower demand due to elections adversely impacted disbursements.

Asset quality slips
RHF’s asset quality has steadily deteriorated over the past couple of years with gross non-performing assets (GNPA) ratio rising from 2.6 percent in March 2017 to 4.2 percent in June 2019. The weakening in asset quality is largely because of increased slippages in the non-housing loan segment. This segment consists of loan against properties and accounted for around 18.5 percent of total loan assets as of June-end.

Around 54 percent of RHF’s loan portfolio consists of self-employed borrowers while the salaried constituted 46 percent of loan book as of June-end. Management intends to continue with the similar loan mix, going forward also. While the yields in the self-employed segment are higher, cash flows in this segment are highly vulnerable to adverse economic cycles and add volatility to RHF’s asset quality.

In Q1 FY20, RHF saw GNPA ratio in non-salaried/self-employed segment rising to 6.2 percent and that of loan-against property (LAP) increasing to 6.9 percent.

While RHF has set up asset recovery centres to focus exclusively on recoveries from NPA accounts and repossess the properties, asset quality will be a key monitorable as it pursues aggressive growth outside its home turf.

RHF reported provision coverage ratio of 31 percent on stage 3 assets. The incremental provisioning requirement under the new accounting policy Ind AS is lower.

Going ahead, it would be crucial for the company to contain its delinquencies and improve operating efficiencies as margins will be under pressure in constrained liquidity and highly competitive environment.

Valuation has moderated, but upside hinges on growthWe are positive on the long-term growth prospects for HFCs. But currently the sector is staring at multiple challenges in the form of tight liquidity, high competition and potentially more stringent regulations.

In addition to multiple sectoral headwinds, RHF is going through rough period marked by lack of growth in home market and rising delinquencies in non‐salaried segment. Consequently, the stock has suffered a sharp derating with forward one year price-to-book multiple contracting from a peak of 4x in FY17 to below 1.5x in FY19.

Repco’s valuation has turned extremely attractive, with the stock currently trading at 0.9 time FY21 estimated book value. Given the return on equity (RoE) in mid-teens, risk-reward is extremely favorable. That said, the upside to the stock is contingent on RHF’s ability to profitably scale up operations while improving the asset quality indicators. Long-term investors can accumulate the stock in a staggered way.