Be a PRO & get up to 50% off on select brands. Explore Now
you are here: HomeNewsBusinessMoneycontrol Research

The disastrous third quarter performance of most public sector banks was an outlier in an otherwise encouraging earnings season. Provisions for bad loans and a sharp decline in treasury income squeezed bottomlines, and the woes may not end anytime soon.

RBI’s recent circular on non-performing assets would mean provisions by banks towards bad loans staying elevated for at least three more quarters. PSU banks have been consistently losing business to their private sector counterparts and things will get worse before getting better. Who will eventually win?

Interestingly, only six out of the nineteen banks reported a profit for the quarter. 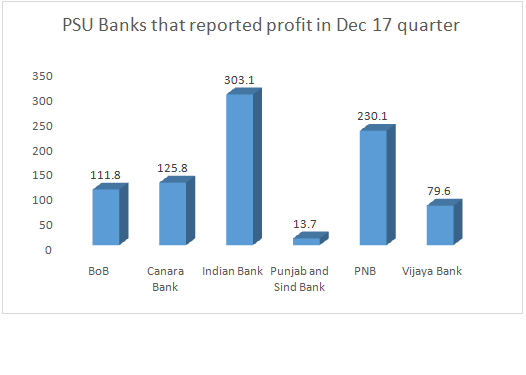 Each of these banks saw a quarter-on-quarter deterioration in performance. Higher provision on bad loans was due tocases being referred to National Company Law Tribunal (NCLT or bankruptcy court in common parlance) as well as RBI’s audit, in some cases, which revealed divergence in recognising bad assets.

In addition, the steep increase in yields on government securities resulted in marked to market loss on the bond portfolio of banks and resulted in provision for investment depreciation and lower treasury gains. However, aggregate gross NPA for this group was up only 6 percent from the previous quarter.

But that’s not the end of the story. Sweepingbad assets under the carpet has been a common practice at banks. Postponing bad loan recognition under the guise of various restructuring schemes gave more time to the borrower as well as lender.

All that has now changed with the latest directive from the RBI. With the recent circular, all existing categorization of standard stressed assets – SDR, S4A, CDR restructuring, and flexible restructuring under 5:25 scheme have been abolished, leaving IBC  (insolvency bankruptcy court) as the only resolution mechanism.

Lenders will have to identify stress in loan accounts, immediately on default, by classifying stressed assets as special mention accounts (SMA)

The RBI has asked banks to do weekly/monthly reporting of Rs 5 crore plus accounts to the Central Repository of Information on Large Credits (CRILC).

Resolution plans are now required to be rated by an external rating agency, with a certain threshold rating to be eligible for implementation.

For large accounts with aggregate exposure of over Rs 2,000 crore, a reference day is set on March 1, 2018. If a resolution is not implemented within 180 days of the reference day or default day (if default day is later than reference day), lenders shall file insolvency application under IBC within 15 days from the expiry of the said timeline.

How bad can it get from now on?

Presently, the banking sector’s gross non-performing assets is close to Rs 9 lakh crore. The blended provision cover on this is close to 47 percent. The gross NPA figure in the normal course would have touched Rs 9.5 lakh crore by March 2018. By that time, banks will have to provide for the NCLT II cases which will keep the provision elevated.

With the new RBI guidelines, close to 2-3 percent of advances that was part of the various restructuring dispensation will now have to get recognised as non-performing assets. This might add an incremental Rs 2.5 lakh crore to the existing NPA pool, requiring incremental provision of the order of Rs 1.25 lakh crore at least in the coming three quarters. That will bleed bottomlines of these banks, but more importantly, the government’s recapitalisation dose of Rs 2.11 lakh crore would evaporate in creating provision for the clean-up and may actually fall short.

To add to the misery, a revival of the capex cycle will remain a mirage at least in FY19. So any sustainable recovery can be expected only post the next Lok Sabha elections.

Interestingly, the shakeout in the banking landscape triggered by transparent bad asset recognition coincides with the formation of the new government in 2019.

Expect bolder M&A (mergers & acquisition) in the PSU space post elections as many of the PSU bankswhich were unable to raise capital from the market will find survival difficult.

The lending landscape will undergo a sea change with mid-sized PSU banks focusing on lending to SMEs and large corporate lending restricted to handful larger entities.

But the real gainers from this exercise will be private sector banks that are well capitalised and fast grabbing market share. 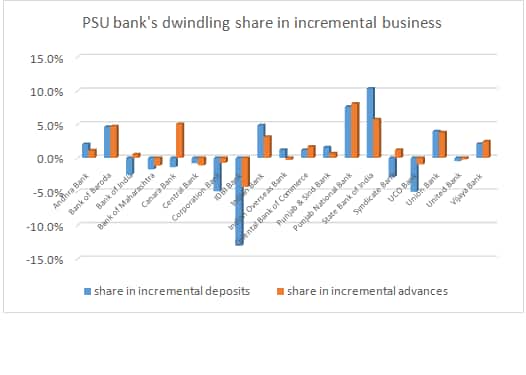 As the exhibit suggests, barring handful, most PSU banks are vacating their market to competitors, and the financial woes which is now certain to linger on more intensely for a while will only aggravate the trend. So the winds of change are definitely positive for well capitalised private banks as well as select NBFCs (non- banking finance companies) and should help sustain their premium valuation in the future.