FMCG player Jyothy Laboratories (JL) notched a sales growth of 6.3 percent for the quarter-ended March, with huge contribution from the dishwashing segment. Overall, operating margin was a disappointing 16.4 percent against 18.5 percent in Q4 FY18 on account of competitive pressure, demand slowdown and a weak performance in household insecticide segment.

Close
Key positives
The dishwashing segment, which constitutes 32 percent of Q4 sales, continued its strong showing with a 21.6 percent growth. This was aided by both Exo (25 percent YoY) and Pril (12 percent) brands. New launches, particularly Pril Tamarind, have supported growth in a significant way. Surprisingly, its market share has dipped on a sequential basis.

It is noteworthy that JL is second only to Hindustan Unilever (HUL) in the dishwashing segment in market sweepstakes, with Pril liquid commanding 16 percent share in the category.

Fabric care, which constitutes 37 percent of sales, saw subdued growth in Q4, but the company witnessed market share gains for its key brand – Ujala Fabric whitener. Having said that, weak margin in the category needs a close watch, given the oil-related raw material headwinds.

Key negative
Personal care, which accounts for nine percent of sales, saw sluggish growth (2.8 percent) in line with the commentary from Godrej Consumer and HUL. The FMCG firm observed prevalence of discount offers in the category, something it did not participate in.

Household insecticides segment (20 percent of sales) was worst impacted, almost in line with the category (coil + liquid vaporiser) de-growth. The key brand in the category -- Maxo franchise -- saw its sales decline by 4.4 percent in the seasonally better quarter. To put things in perspective, for Godrej Consumer, this category declined six percent in the quarter gone by.

EBITDA margin came off 210 bps on account of higher cost of goods sold, advertising spends and employee cost, partially offset by lower other expenses. Except for personal care, operating margin declined for all the other segments. Personal care segment clocked an EBIT margin of 33.7 percent, a significant jump from the past few quarters, aided by cheaper raw materials.

Key observation
In recent years, the household insecticides segment has been impacted by growth in illegal incense sticks. This is a category-wide challenge enumerated by market leader Godrej Consumer as well. Among the listed companies, JL has been at the forefront in meeting this challenge through new product launches like natural incense sticks.

However, intense competition, particularly from illegal incense sticks, has capped the growth and adversely impacted margin. This remains a key factor to watch out for.

The firm has reported positive traction from its natural incense sticks launched in recent times, with a presence mainly in Gujarat and south India. Particularly in Karnataka, the company now commands a market share of around seven percent.

JL's P/E at a significant discount to FMCG majors 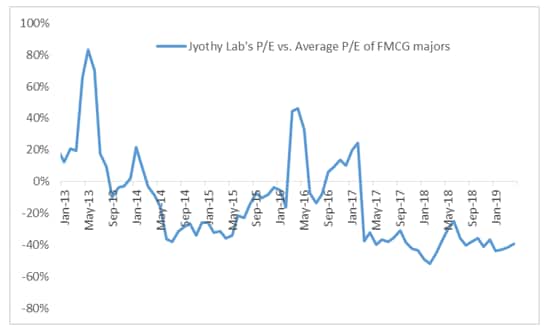 While the management notes that there has been some moderation in rural growth, it doesn’t point towards a major stagnation. As far as the near-term outlook is concerned, the management has guided at 12-14 percent standalone sales growth in the current fiscal.

Though advertising spend is expected to grow by nearly two times, the company expects to deliver a 15-16 percent EBITDA margin in FY20.

The stock is currently trading at a 52-week low, the level last witnessed in September 2016, and trades at 27 times FY20 estimated price-to-earnings, which is at an about 40 percent discount to average P/E of FMCG majors.

This valuation discount is unprecedented in our view and should shrink going forward as the earnings potential unfolds further. Investors can keep this stock on their investment radar.