Everest Bank of India -- this was one of the names contemplated while launching HDFC Bank in 1994. Today, it sounds rather silly. Nonetheless, 25 years later, many of HDFC Bank’s achievements appear as lofty as the highest peak of the world.

Thanks to such stellar performance, the stock has delivered manifold returns since its listing in 1995. HDFC Bank, which got listed at Rs 40, three times its issue price, has generated compounded annual returns of around 29 percent in the last 20 years significantly outperforming the Sensex, which delivered 12 percent CAGR during the same period.

The upward journey of the bank’s stock price is now more than 20 years old. Hence, the most obvious question of investors is: Can the rally continue and wealth be created by investing in HDFC Bank’s stock today? Well, bull runs in stocks don’t die of old age, but from a dearth of earnings. HDFC Bank continues to consistently report 20 percent growth in its net profit every quarter.

Overview of HDB Financial Services
HDB was set up as a non-bank financing company (NBFC) by HDFC Bank in June 2007 and began operations in FY08. HDB has emerged as one of the larger players in retail financing over the past few years. It has a presence in 831 cities through 1,165 branches as at March 31, 2018.

While HDB complements the parent's product portfolio and supports collection activities for the retail portfolio, it functions independently and caters to a customer segment distinct from that of the bank.

HDB’s product portfolio
HDB’s asset portfolio stood at Rs 48,014 crore as at September 30, 2018 and has grown at more than 30 percent CAGR in the last four years. The loan book has been diversified with increased presence in commercial vehicle and construction equipment (CV/CE) financing and business loans. As a result, the share of loans against property (LAP) declined to 38 percent as on September 30, 2018, as compared to 60 percent as on March 31, 2016. The unsecured loans segment constitutes around 21 percent of the overall portfolio as on September 30, 2018. The company is aggressively expanding into consumer durable financing and widening its reach to the metros, moving on from the traditional focus on the self-employed segment in non-metros.

HDB’s earnings profile and asset quality
HDB’s profit more than quadrupled during the last four years to Rs 952 crore. Return on assets (RoA) has been around 2.4 percent in the last three years, aided by the healthy net interest margin (NIM) and low credit cost.

Its asset quality is reasonably healthy with gross non-performing assets (GNPA) at two percent as on September 30, 2018. The loan book, however, is relatively unseasoned and has to be fully tested across economic cycles.

HDB can be a value creator for HDFC Bank
We expect HDB to gain further scale over the medium term due to immense growth potential in the sector and with adequate capital support from the bank. So far, HDFC Bank has cumulatively infused Rs 3,480 crore in HDB.

Value unlocking through an IPO of HDB is still some time away. However, given its current size, we have assigned value to HDB for arriving at the fair value for the HDFC Bank stock. Even if we value HDB on a conservative basis (three times FY21 estimated book value), we arrive at a strong upside (around 17 percent) to HDFC Bank’s stock price (CMP: Rs 2,300). 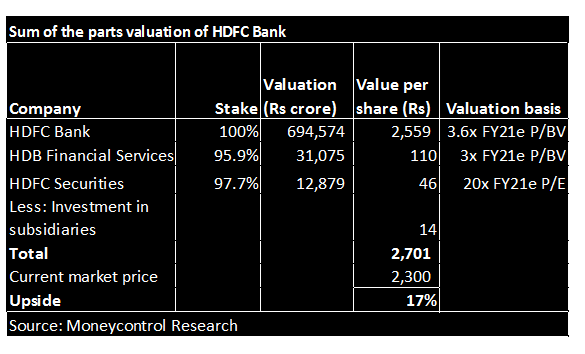 Sources said that investors are buying shares of unlisted HDB around Rs 800-900 per share over the counter, valuing the company at Rs 60,000 -70,000 crore (FY21 estimated price-to-book value of 6-7 times). If we incorporate this into the valuation, the upside to the HDFC Bank stock increases substantially. But why should one assign premium valuation to HDB?
As market folklore goes, an ace value investor and now the promoter of D-Mart, Radhakishan Damani was accumulating HDFC Bank stock after its listing in 1995. And when he was asked the reason for buying HDFC Bank stock when there were so many other options available at cheaper valuations, his reply was: “You can’t stay on Pedder Road (one of Mumbai’s most expensive areas) at Dharavi’s (Mumbai’s biggest slum area) rates.”

The conventional valuation methodology may not apply to an HDFC group entity. The group has incubated many successful financial services businesses (GRUH Finance, HDFC Life Insurance Company, HDFC Asset Management Company), all of which are trading at a significant premium. For instance, GRUH for a long time traded at more than 8-9 times forward P/BV multiple. In fact, HDFC sold GRUH to Bandhan bank at a trailing price-to-book (P/B) of around 14 times.

Every business has a '90 percent rule' i.e. that one factor which holds the key to success. In most financial services businesses, that 90 percent rule is 'borrow cheap and underwrite well'. And nobody understands this rule better than the HDFC Group. We see no reason why HDB should not command premium valuations.

What should investors do?
The impending management change bothers many investors. There is talk about RBI allowing private banks’ CEOs to continue until 75 years of age (from 70 years now), in line with the corporate sector.

But while we await clarity on who would succeed Aditya Puri, CEO transition is expected to be smooth as HDFC Bank is a process driven institution.

HDFC Bank enjoys dual moats (competitive advantage) on both the assets as well as the liabilities side. The steady high RoE offers opportunities to the bank to deploy profits at a high rate and compound the book value consistently. We expect the bank to continue to register profitable growth over the next few years as it is garnering market share at an accelerated pace despite its huge size (balance sheet size of Rs 11.6 lakh crore as at December 31, 2018).

While HDFC Bank has underperformed corporate lenders (ICICI Bank and Axis Bank) in the last one year, value unlocking of HDB in the next couple of years can significantly add to stock’s performance. For long-term investors, HDFC Bank is a must buy and as the great investor Philip Fisher said: “If the job has been correctly done when a common stock is purchased, the time to sell it is—almost never.”