Godrej Industries Limited (GIL), has reaped huge dividends from its investments across various businesses like FMCG and property development by taking them public.

Godrej Industries Limited (GIL), has reaped huge dividends from its investments across various businesses like FMCG (fast moving consumer goods) and property development by taking them public. Following the strategy, GIL is now taking its agri business subsidiary Godrej Agrovet (63.7 percent stake) public. The valuation will be known in the coming days. Will the listing provide further upside for shareholders of GIL? 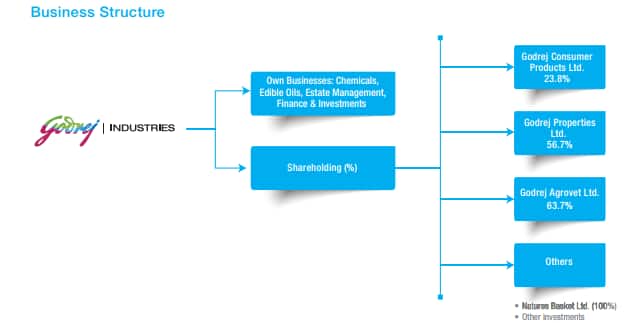 Godrej Consumer Products Ltd (GCPL) clocks nearly 48 percent of its revenue from operations in emerging markets across three continents. It has leadership in household insecticides in India, the second largest player in Indonesia and expanding its footprint in Africa. It is the leader in serving the hair care needs of women of African descent, the number one player in hair colour in India and Sub-Saharan Africa, and among the leading players in Latin America. It also ranks number two in soaps in India, and is the number one player in air fresheners and wet tissues in Indonesia.

The company has been focusing on a strategy to build leadership in core categories - home care, personal wash and hair care in 3 emerging markets -Asia, Africa and Latin America.

Besides deriving value from these listed entities, GIL also houses the chemicals business of the group.

The chemicals division is one of India’s leading manufacturers of basic oleo-chemicals, surfactants and derivatives of oleo-chemicals. The division has a blend of domestic and international operations (close to 30 percent) and is one of the leading suppliers in the Indian market. The division is focusing on value-added chemicals which have steady margins and also helps in de-risking the business. 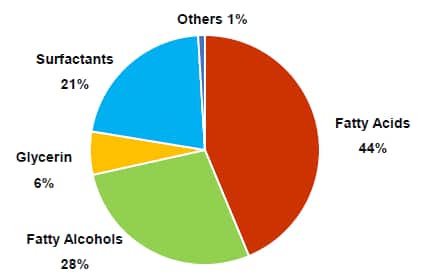 What is the implied value of Godrej Agrovet in the price of GIL?

As our analysis suggests, the net value of the above-mentioned businesses is close to Rs 16,520 crore after considering a 20 percent holding company discount. The remaining value of Rs 2770 crore is on account of the subsidiary Godrej Agrovet. Depending on what valuation Godrej Agrovet commands on listing, shareholders of GIL can look forward to further value unlocking.

What to look forward to from Godrej Agrovet?

Godrej Agrovet Limited, a diversified farm-to-fork play, has interest in animal feed, crop protection, dairy and oil palm business. It has some interesting partnership in promising areas that can create long-term value.

Each business segment Godrej Agrovet operates in is either under-penetrated (animal feed) or in high growth areas (dairy, poultry, agri-inputs).  In FY17, Agrovet recorded consolidated revenue of Rs 4,985 crore against Rs 3,819 crore in FY16, a growth of 31 percent. The reported profit before tax for the year was up by 12 percent to Rs 375 crore in FY17. The business has several long-term moats. Customer stickiness, strong brand, R&D and pan-India distribution are the drivers of the animal feed business whereas the dairy business should benefit from the introduction of value-added products and expansion of geographic reach. In agri inputs, the company aims to be among the top 10 companies in India over the next 3 years led by acquisition of Astec, in-licensing of molecules, launch of rice herbicide, and continuing growth in existing business. Close to one-third of India’s palm oil plantations are under its fold.

Given the unique offering, we expect the issue to command a decent valuation. As our calculation suggests, the implied valuation of Godrej Agrovet in the current price of GIL (even after factoring in 20 percent holding company discount) is close to Rs 5435 crore. A higher valuation of Agrovet, post listing will translate to a stock upside for GIL shareholders.

Should Agrovet command a valuation of Rs 8000 crore, the incremental stock upside is close to 7 percent or Rs 39 per share. However, long-term investors must look at this value-creating well pedigreed company for a longer time frame albeit the discount that a holding company structure suffers from.
Tags: #Business #Companies #Godrej #IPO upcoming issue #Moneycontrol Research #Recommendations
first published: Sep 25, 2017 05:02 pm