Fed does an out of line rate cut, but Street expects a lot more

The US Federal Reserve's reduction of interest rates by 50 basis points in an emergency move on Tuesday is an attempt to ring-fence the US economy from the impact of Coronavirus, or COVID-19, as it's being called.

But the move failed to cheer the US financial markets, which are worried about the prolonged slowdown.

The fact that the Fed did it for the first time outside its regular scheduled policy meeting since the global financial crisis in 2008 underscores the gravity of the matter.

The policy action to cut the rates to a target range of 1-1.25 percent brings into focus similar action by central banks in 2008. On January 22, 2008, the US Fed had cut the policy rate by 75 bps and on October 8 the same year – post Lehman collapse – the federal funds rate was reduced by 50 bps.

Fed Chair Jerome Powell acknowledged the looming threat posed by the contagion, which originated in China, terming the situation as fluid. Many governments and companies have restricted travel, which has led to factory shutdowns and disrupted production of goods and supply chains.

Powell, however, maintained that the US economy remains strong, stating that the spread of the virus had caused a material change in the US central bank’s growth outlook. Note: Effective December 16, 2008, target rate is reported as a range

The Fed action comes on the heels of G-7 Finance Ministers meet earlier, which called for a concerted action in response to the pathogen to support the global economy during this critical phase.

Earlier on Tuesday, the Australian central bank lowered its benchmark policy rate by 25 bps signalling that more is likely to come in the near future. Even Malaysia lowered rates to blunt the impact of the virus. On Monday, the Bank of Japan took measures to support liquidity in its financial markets.

In early days of the outbreak, monetary easing and liquidity measures were confined to the Chinese central bank. But then, the epidemic spread beyond Asia, with a far-reaching impact on the global supply chain and economic activity, prompting governments and central banks to mount a coordinated response.

The US treasury yield curve, which turned more or less steady after the preliminary trade agreement between the US and China, has recently seen a sharp downward shift. The yield on the 10-year US Treasury note went below 1 percent for the first time ever. Short-term yields are even weaker, given the disinflationary scenario in the near term. 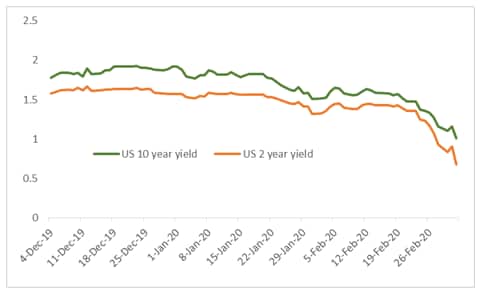 The CBOE Fed Watch tool suggests that just a week ago, there was 66 percent probability that the target range for policy rate for the March meet would remain at the level decided during the January 2020 meeting – that is, 150-175 bps. Now, the Street is pricing in one more rate cut of 25 bps possibly in April.

This could happen sooner, given the equity and bond market reaction and the base case that the epidemic will get worse before stabilising. S&P 500 was down 2 percent yesterday, making it 10 percent lower in the last two weeks.

Central banks across the world, including the Reserve Bank of India (RBI), are expected to announce proactive measures aimed at liquidity support and transmission. There are two broad categories of interest here. One which is highly affected by the virus requires more of a medical, administrative and fiscal steps. However, the areas unaffected so far by the epidemic but have a strong trade and supply chain linkage need support – both monetary and fiscal – so that any blow to credit and liquidity flow is minimised.

Given the fast-changing dynamics, the Fed is expected to continue with a series of open market operations to provide ample liquidity. In a span of six months (September 2019- February 2020), there has been a liquidity infusion of about $400 billion by the Federal Reserve. We believe this kind of mini-quantitative easing would continue beyond the earlier schedule of at least April 2020 - until the global scare fades.

The key challenge is the limited scope for central banks to act. Most advanced countries have negative or near-zero policy interest rates. The US Federal Reserve has also exhausted a good part of ammunition to the painful trade war. This paves the way for the fiscal policies to take centre-stage when it comes to stimulus measures.

Chart: Potential impact on global GDP in 2020 as epidemic spreads

In terms of the economic impact, a great part of H1 2020 could be a washout for many industries as well as regions. The OECD expects at least 50 bps reduction of global GDP in 2020. The full-year impact on GDP could be as high as 150 bps if the epidemic spreads through the Asia-Pacific and the Northern Hemisphere.

As it is quite early and uncertain to assess when the virus will be behind us, the stock market volatility is expected to remain elevated. The longer the duration of the impact, the higher the probability of a global recession. Remember, implied volatility of this nature was last witnessed during the Euro debt turmoil in 2011 and the sub-prime crisis in 2007-08.