China slowdown, or is it China changing and the world needs to take note of it?

Chinese economy grew by 6.2 percent in Q2 2019, sequentially decelerating from the 6.4 percent growth in the previous quarter.

While this translates into a downward trajectory of GDP growth (as against 6.6 percent in 2018) and makes it increasingly challenging for China to negotiate trade war with the US better, implications are equally grimmer for global central banks to allay global growth fears.

Another interesting observation is China’s focus on high-tech industries and improving capacity utilisation for commodities, which also merits investor attention.

Industrial production for Q2 was a tad lower than Q1 CY19 though recent monthly data have improved. June month data suggest an improvement in production for metals, chemicals, transport equipment and machinery. Having said that slump in producer price index for the industrial sector suggests that weak pricing /demand scenario persists. Furthermore, China’s fixed asset investment of 5.8 percent in H1 CY19 is stuck in a lower range compared to historical rates. 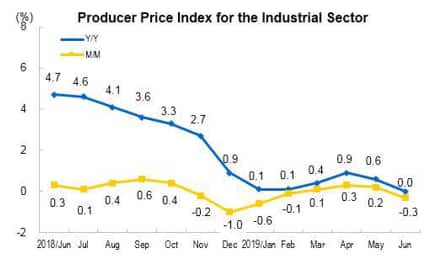 However, what may be of interest to the Trump administration in the US is that value added in China’s key sub-segments such as strategic emerging industries (+7.7 percent) and high-tech manufacturing (+9 percent) was decent in H1 CY19. The output of new energy vehicles and solar cells grew by 34.6 percent and 20.1 percent YoY. Furthermore, investment in high-tech manufacturing industry increased by 10.4 percent and the investment in high-tech services went up by 13.5 percent YoY in H1 CY19.

Additionally, higher investment (+48 percent YoY in H1 CY19) in ecological protection and treatment of environment pollution warrant attention and underline government focus on the supply side reforms. Here, the sequential improvement in capacity utilisation of the metals and non-metallic mineral products industry points to higher supplies in commodities.

Having said that, this doesn’t take away the attention from subdued domestic economy which is further aggravated by the US-China trade war. Note that while China’s net exports contribute about 3 percent to GDP, size of China’s total trade (import+ export) is ~ 33 percent of GDP. China’s exports are down 1.3 percent and imports have slumped by 7.3 percent YoY in June 2019. Bilateral trade with the US has been impacted significantly - Exports down by 7.8 percent and imports lower by 31 percent in June. It was the first full month of higher US tariffs on $200 billion of Chinese goods. The US contributes 19 percent of total exports from China and 8.4 percent import to China.

Chart: Amount of US exports to China covered by tariffs ($ bn) Chinese equity indices are already factoring in fading enthusiasm for trade talks. Shanghai Composite index is back to levels of pre-G20 summit when Trump indicated resumption of trade talks.

Markets are assuming that there may not be any early breakthrough, which means more pain for external trade both in terms of elevated duties and an uncertain outlook. China’s National Bureau of Statistics as well underlines the concern for H2 CY19 stating that “Chinese economy is still in a complex and grave situation and global growth has slowed and external uncertainties are on the rise". As far as US equities are concerned, S&P 500 is up 10 percent from the early June lows, partially on the expectations for a more accommodative monetary policy. A case for the same is further strengthened by the Fed Chairman Jerome Powell’s testimony to the Congress in the context of global uncertainties and the slack in business investment.

For India Inc, which is grappling with its own domestic weakening of demand environment, lower commodity cost and interest rate regime come as a timely reprieve. However, we caution that there remains a higher risk that global/domestic growth revival would take longer than the consensus expectation of a revival in second half of 2019. And hence, flight towards quality in terms management, regulatory context and balance sheet is expected to sustain in the near term.

Improving capacity utilisation in China for metals and chemicals, along with the tariff war, suggest that in days to come, higher supplies to India can be expected which can adversely impact supply-demand picture for select commodities.