Can the FY20 disinvestment target be achieved?

Highlights:-
- Disinvestment target for FY20 has been pegged at Rs 1,05,000 crore
- Government will bring down stake in listed CPSEs to 75%

Nirmala Sitharaman, in her Budget speech, set a disinvestment target of Rs 1,05,000 crore for FY20. Disinvestment has been one of the key priority areas for the government in a bid to meet its fiscal deficit targets. How realistic is this? Let us consider the probable options that could chart the course.

After excluding banks and financial institutions, if the government reduces its stake in listed PSUs (public sector undertakings) to 75 percent, it would be able to raise only about Rs 15,647 crore. Taking into account the market capitalisation as on July 4, here is the PSU-wise contribution. The proceeds would comprise only 14.9 percent of the FY20 disinvestment target, thus implying that bigger stakes in more PSUs may have to be sold.

In the long run, to ensure adequacy of disinvestment proceeds, the government will consider bringing its stake in PSUs down to 51 percent. Should this be achieved, a significant sum of money (Rs 1,52,862 crore) will be available, even if we exclude financial institutions. The main contributors on this front would be as under. 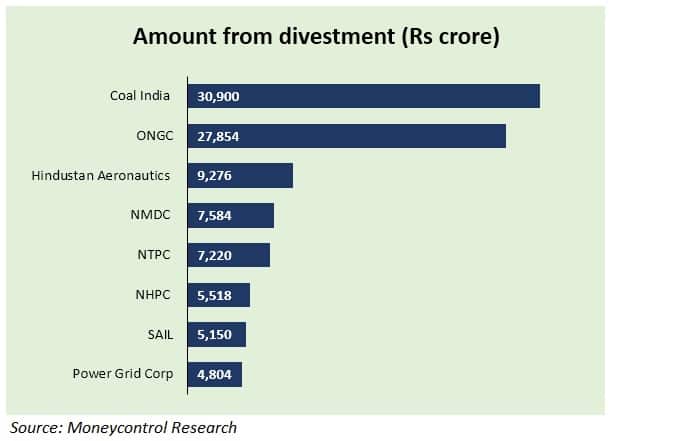 Given the huge quantum of money involved, open sale of such stakes in secondary markets may not find enough takers. Ideally, a combination of open market stake sale through bulk/block deals and strategic sale of a part of the business to private companies – domestic or foreign – would have to be undertaken in a phased manner.

The loss-making national carrier, with outstanding loans exceeding Rs 50,000 crore, is in dire need of privatisation. The government is in talks to divest nearly 76 percent stake, which would help the government’s disinvestment kitty swell by close to Rs 30,000 crore.

What should one infer?

Prima facie, amid the ongoing stock market volatility and multiple de-rating of stocks across sectors, fetching good valuations on open sale seems a big ask. To add to the government’s woes, a dampened investment sentiment and lack of controlling majority may possibly discourage private players from engaging in active talks with PSUs.

In our view, a challenging path lies ahead for the Centre in coming months. However, as we’ve seen in the past couple of financial years, disinvestment targets have been achieved in the concluding months through exchange traded funds, initial public offers and inter-PSU mergers.

While the government managed to mop up the targeted disinvestment proceeds in the past couple of years, it has resorted to multiple shortcuts and subterfuges that undermine both the basic objectives of the disinvestment programme as well as the long-term interests of profitable state-owned companies.

Hopefully, the government will try achieving the divestment target in FY20 through big strategic sale and not in a way it achieved in FY18 and FY19.