Last year’s Union Budget tried to address growth challenges by improving income – through direct tax incentives, the PM-KISAN scheme and also by focusing on rural infrastructure & food processing industries and Made-in-India initiatives. Since then, consumption growth has only worsened further while the fiscal space has narrowed for a big bang stimulus. However, we believe that the sharp domestic slowdown warrants a stronger push towards increasing disposable income, especially in rural areas and focusing more on made in India initiatives in the upcoming budget.

What are the direct tax announcements anticipated?

A change in tax slabs for the lower income range, an increase in eligible deduction under Section 80C of the Income Tax Act to Rs2.0-2.5 lakh from Rs1.5 lakh currently and a tweak in rates or the holding period for Long-Term Capital Gains (LTCG) tax.

There is unlikely to be any changed in corporate taxes after the finance minister cut rates in September 2019.

In the case of rural India, a further enhancement of schemes such as the Pradhan Mantri Kisan Samman Nidhi (PM-KISAN) to provide income support to farmers is possible.

Here, we expect announcements ranging from support for farm subsidy schemes, allocation for food processing schemes and efforts towards increasing non-farm productivity. The aquaculture and dairy sectors, which are seeing some signs of improvement in fundamentals, may continue to receive strong attention.

Companies such as Dabur, Emami, HUL and Jyothy labs have 40-50 percent sales from the rural economy and can benefit from the rural infrastructure focus and improvement in disposable income. Other companies which will benefit from the focus on the food processing value chain include ITC, snack counters (Prataap Snacks & DFM Foods), Britannia, Marico, dairy scrips  such as Parag Milk Foods & Hatsun Agro, Varun Beverages and Venkys Ltd. Made in India initiatives

It is likely that forthcoming budget would continue the trend of raising custom duties selectively to help domestic consumer durable manufacturers. Focus would be on curbing imports of non-essential items and items which are at the lower end of manufacturing value chain to promote domestic production.  Last year, the government announced import duty hikes for various goods in cables, electronics and white goods. This apparently helped contract manufacturers such as Dixon Technologies and Amber Enterprises and cable companies such as Finolex Cables and Polycab.

Import duty tweaks need to be carefully followed as they impact how a given company is positioned in the entire value chain. For instance, higher duties for PVC (Polyvinyl chloride – a widely used plastic polymer) and duty exemption for Ethylene dichloride (a raw material for PVC) adversely impacted plastic pipe and plastic furniture manufacturers who imported PVC but helped integrated players like Finolex Industries.

Similarly, increased duties on refined palm oil helped domestic manufacturers like Godrej Agrovet, but weighed on the margins of snacks manufacturers. Note that India relies on imports for 70 percent of its edible oil consumption and palm oil accounts for nearly two-thirds of India’s edible oil imports of around 15 million tonne.

In this Budget, it is likely that the finance minister will hike import duties on footwear, coated paper, paper boards, pneumatic tyres and chemicals. Duties might be removed for imported waste paper and wood pulp. The companies to watch under such a scenario are Relaxo Footwear, ITC, TNPL (Tamil Nadu Newsprint and Papers Limited), JK Paper and Petrochemical companies (RIL, HPCL, BPCL).

Overall, the budget is expected to be incrementally supportive for consumer staple demand. Import duty hikes would help a few consumer durable companies as well.

However, in this context, a recent report from Nielson suggest that consumption demand after having sharply declined over last year may be stabilizing. While sector value growth has slowed to 6.6 percent growth in Dec 2019 from a strong base of 15.7 percent in the Dec 2018 quarter, it is expected to post 9-10 percent growth in the year 2020.

The recent rise in food & milk prices along with favorable outlook for rabi season holds promise for a gradual improvement in rural income. Taking a cue from management commentaries, growth revival is expected to be more pronounced in second half of 2020.

Having said that, in the upcoming budget, investors can watch for relatively inexpensive counters of ITC, Jyothy labs and Marico. Further, given the scenario that the growth outlook would improve only gradually, exposure to relatively diversified but expensive scrips of HUL, Dabur and Godrej Consumer can be taken on dips.

Among consumer discretionary stocks, some scrips such as Relaxo Footwear, Polycab, Dixon Technologies and Amber Enterprises have had a strong run in recent times. Long term investors can keep them on their radar and consider them accumulating them on correction. 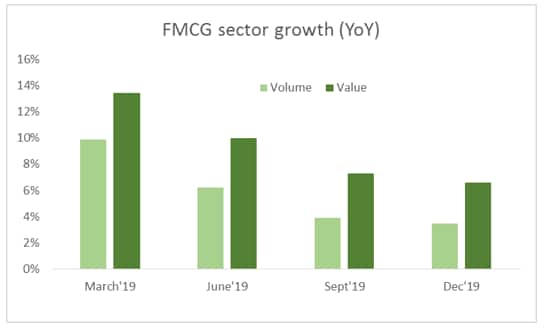