Upcoming Event:Join us for New HorAIzon from Oct 6-7, 2pm and be a part of exciting conversations on tech & innovation
you are here: HomeNewsBusinessMoneycontrol Research

Bandhan Bank: Richly valued but an attractive buy on dips

Bandhan stands out for its ability to achieve profitable growth in a segment marred by several issues.

Bandhan Bank, the youngest bank in India, reported strong FY18 earnings, with net profit increasing 21 percent year-on-year (YoY) on the back solid loan book growth. The bank along with IDFC were the only two entities to be granted a banking licence by the Reserve Bank in 2014.

Superior return ratios, pristine asset quality, strong capitalisation, improving funding, highly experienced management and promoter profile clearly makes Bandhan an outlier in the microfinance segment. Notwithstanding its premium valuation, the tailwinds for the sector and its vantage positioning makes it a stock worth looking at.

The bank has delivered impressive growth since its inception. For FY18, net interest income (NII, the difference between interest income and expense) increased 26 percent year-on-year (YoY) as robust loan growth of 37 percent YoY was partially offset by a 70 bps margin compression to 9.7 percent YoY.

Operating leverage improved marginally as the cost-to-income declined to 35 percent as against 36.3 percent last year. As the bank sweats its existing assets efficiently, C/I ratio which has started to trend lower should moderate further.

The bank continued to maintain its impeccable asset quality with gross and net non-performing assets at 1.3 percent and 0.4 percent, respectively, as at March end. Post its initial public offer in March, where it raised fresh capital of around Rs 3,662 crore, its capital adequacy strengthened to 31.5 percent, way above the minimum regulatory requirement of 13 percent for new banks. 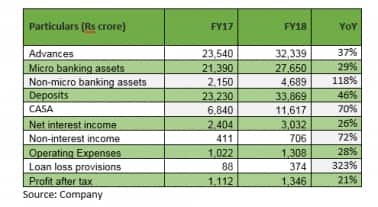 A differentiated commercial bank with growth drivers in place

Bandhan Bank is the first microfinance company to convert into a full-fledged universal bank, distinct from ‘small finance banks’ (SFBs). The latest private bank in India is unique in many ways:

1) The commercial bank continues to focus on serving underbanked and underpenetrated markets in India. 2) It has an extensive low-cost network of 2,764 Doorstep Service Centres (DSC), in addition to 936 branches, with 71 percent of its distribution network present in rural and semi-urban areas. While it is developing a pan-Indian network, the eastern and north-eastern region remains its stronghold, constituting 67.2 percent of its distribution network. 3) Though the non-micro asset book has risen 118 percent YoY, the bank’s key strength continues to be micro lending as 86 percent of its total assets are micro banking assets with 10.6 million micro loan customers as of March 31, 2018.

We see immense growth potential in the microfinance segment on rising penetration and increasing average loan size. The regional and low-income group concentration are key risks. But given the relatively low credit penetration, these exposures also offer an opportunity of faster growth which Bandhan Bank has well captured so far.

The bank’s performance has been superior, both in terms of returns profile and asset quality, vis-a-vis the three listed small finance banks (SFBs). It stands out even when compared to new private sector banks. However, it is too small in size to be compared to well entrenched players. The bank’s ability to maintain its profitable growth, while keeping asset quality under control and as it scales up its asset book remains to be seen. It is heartening to see Bandhan Bank’s reach through 936 branches and 2,764 DSCs. Also, CASA ratio at 34 percent in its second year of operation is well above many other new private banks during their initial stages.

While micro finance is a relatively riskier asset segment, with inherently weak borrower profile that is susceptible to socio-political issues and the resulting unhealthy credit culture, few in the industry boasts of a track record as Bandhan Bank. Given the strong return ratio with return on assets (RoA) at 4.1 percent and return on equity (RoE) at 26 percent for FY18, the steep valuation isn’t a surprise. Near-term stock price upside seems limited as stock trades at 6.4 times trailing price-to-book (P/BV), following the strong stock price performance since listing. The stock is up 35 percent since its listing last month.

Bandhan Bank’s scale, experience and history in micro loans, now combined with general banking business and more than adequate capital, should support premium valuations. Investors looking for high quality business operating at the bottom of the pyramid may look to utilise adverse market volatility, if any, as an opportunity to buy into the stock.