Upcoming Event:Join us for New HorAIzon from Oct 6-7, 2pm and be a part of exciting conversations on tech & innovation
you are here: HomeNewsBusinessMoneycontrol Research

Bajaj Auto (CMP: Rs 3,198, Mcap: Rs 91,939 crore) unveiled its September quarterly results in line with expectations amid weak demand. What was surprising is the higher single-digit growth in realisation, which arrested the fall in both top line and operating margin. Operating margin shrank owing to negative operating leverage.

We continue to like the business on the back of its strategy of increasing market share, new product launches and reasonable valuations (15.9 times FY21 projected earnings).

The September quarter in numbers 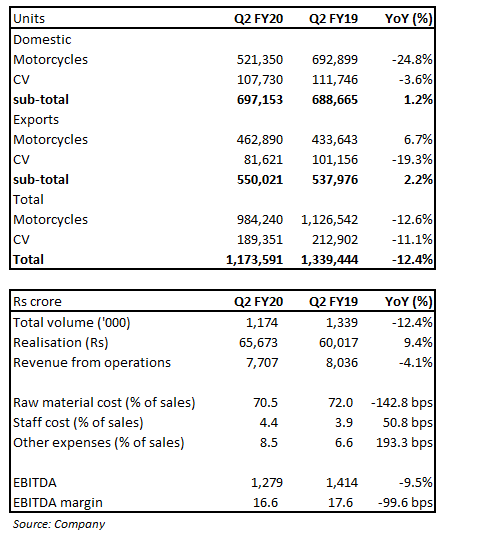 Volume – weak demand
Two-wheeler demand in domestic market has been lacklustre for long now, which is visible in Bajaj Auto’s volume numbers for the segment. The segment witnessed a significant decline of 24.8 percent on a year-on-year (YoY) basis. The company had 20 percent retail market share by the end of Q2 FY20.

The domestic three-wheeler (3W) segment also witnessed volumes shrinking in the domestic market, primarily because of the large base of the previous year.

Decline in the overall volume pulled down top line by 4.1 percent. What helped is the 9.4 percent growth in realisation led by a rich product mix. Negative operating leverage hurt operating margin. It reported an earnings before interest, tax, depreciation and amortisation (EBITDA) margin of 16.6 percent, down 99.6 bps YoY.

The outlook continues to be bleak, with no pick-up in demand. The management expects some improvement during the festive season. In the three-wheeler market, it expects to surpass volumes in FY19 driven by a focus on increasing market share.

Export markets - Stable
The management indicated that the international market outlook is stable with fast growth in Africa and Asia, but muted growth in Latin America. It indicated that emerging markets are showing 2-3 percent growth in the two-wheeler segment.Market share improvement
The company’s current strategy to gain market share by aggressive pricing in the entry-level segment is working well. This has led to expansion in its market share to 20 percent from 18.3 percent at the end of Q1 FY20.New products – Key growth driver
The management has highlighted that the next leg of growth will come from new variants of the existing products or fresh ones. Bajaj plans to launch six new models or upgrades in FY20.Operating margin on an upward trajectory
EBITDA margin has come off from around 20 percent levels achieved in the past few quarters owing to price cuts in the entry level bike segment. The management, however, indicated that the margin has bottomed out. This is evident from the Q2 FY20 results as margin read 16.6 percent, up from 15.8 percent in Q1 FY20.Reasonable valuationThe company is trading at 15.9 times FY21 projected earnings. We advise investors to accumulate this company, given the strong growth potential.