UBS initiates coverage on this Nifty stock that has surged 13,000% in 10 yrs

Bajaj Finance is trading at a 35 percent premium to its five-year average price to book value (P/BV), a significant premium to other private sector banks, UBS said.

If you are an investor, chances are that Bajaj Finance must have caught your attention. It has also caught the attention of UBS, which has initiated coverage on the stock with a “neutral” view and a target price of Rs 4,600 for a 12-month horizon.

"Our estimates are in line with consensus, highlighting the high expectations. While convinced on growth, we initiate coverage with a neutral rating on valuation," UBS said in a report on January 10.

Bajaj Finance is trading at a 35 percent premium to its five-year average price to book value (P/BV), a significant premium to other private sector banks on P/BV, UBS said.

However, the premium on the price-to-earnings ratio (PE) is lower due to a strong return on assets (RoA) and return on equity (RoE), it added. 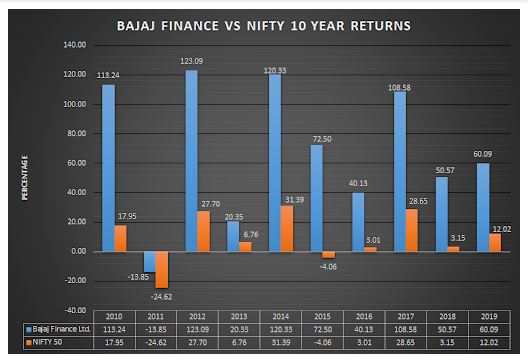 Bajaj Finance, UBS said, showed an impressive loan book CAGR of 46.5 percent over FY09-19, supported by new product initiatives, strong customer acquisition and a focus on cross-selling and the growth story is expected to continue.

"While the base is no longer low, with loan book likely to increase to Rs 1.55 lakh crore by March 2020, we think there are still growth opportunities, supported by client mining, its low market share in large segments like mortgages and SME, and continued traction in customer acquisition," UBS said.

Bajaj Finance has the third-largest customer base among private financiers after ICICI Bank and HDFC Bank. The company's customer base increased 13 times since March 2009 to 3.9 crore in September 2019.

As per UBS, while AUM recorded a 37 percent CAGR over FY14-19, its market share in some large segments like mortgages and SMEs is still small.

UBS expects easing liquidity and a sharp decline in wholesale rates to further aid in scaling-up of loans, particularly mortgages.

"While we build in gradual margin compression due to a rising share of mortgages, we think RoA will remain largely stable, supported by strong fee-income growth and operating leverage. We expect a 36.5 percent EPS CAGR over FY19-22 despite the high base," UBS said.

Moreover, Bajaj Finance’s fee income growth has been very strong in FY19 and the first half of FY20, supported by cross-selling to its large customer base. UBS thinks expects it continue in FY21-22 and moderate in FY23-24.

"We expect its opex-to-assets ratio to decline 50bps over FY19-24 and the cost-to-income ratio to fall 120bps to 34.1 percent over the same period," UBS said.

What are the risks?

UBS said a slowing economy posed a risk to the stock, as the majority of the company's customers are from the self-employed and SME segment.

"While gross non-performing loans (GNPLs) have remained below 1.6 percent, the sharp slowdown in the economy and services sector could pose some challenge given the company's exposure to the self-employed and SME segments," said UBS.

"We also factor in provisions for Karvy exposure in FY20 and consequently our credit costs are higher (2.06 percent in FY20E)."

The brokerage expects credit costs to normalise at 1.7 percent over FY21-22 and GNPLs to rise marginally to about 1.8 percent in FY20-22.

Given the premium valuations, UBS said the growth trajectory of Bajaj Finance is largely priced in.

"Higher than estimated fee income growth or operating leverage could drive better RoEs and could result in strong share price performance in the near-term. However, any deterioration in asset quality could lead to a correction," UBS said.