Trade Spotlight | What should you do with RHI Magnesita, EIH, Radico Khaitan on Thursday?

EIH rose 4.3 percent to Rs 196.2 and formed bullish candle on the daily charts with above average volumes. It has seen a breakout of small down ward sloping resistance trend line adjoining September 7 and September 20, while it has respected the support trend line formed in last couple of weeks.

The market corrected half a percent after a two-day rally, indicating cautious mood at Dalal Street ahead of the outcome of Federal Open Market Committee (FOMC) meeting on September 21. Late night on Wednesday, the US Fed, as expected, raised interest rates by 75 bps for the third time in a row, to bring down inflation.

The BSE Sensex declined 263 points to 59,457, and the Nifty50 fell 98 points to 17,718, while the broader markets also caught in bear trap, with the Nifty Midcap 100 index down 0.7 percent and Smallcap 100 index declining 1 percent. All sectors, barring FMCG, were in corrective mood.

Stocks that were in action and bucked trend included RHI Magnesita India which rallied 5.5 percent to end at record closing high of Rs 689, and formed bullish candlestick pattern on the daily charts, continuing uptrend for third consecutive session. Also the stock has seen a breakout of horizontal resistance trend line adjoining April 19, 2022 and September 15, 2022.

EIH rose 4.3 percent to Rs 196.2 and formed a bullish candle on the daily charts with above-average volumes. It has seen a breakout of small downward sloping resistance trend line adjoining September 7 and September 20, while it has respected the support trend line formed in last couple of weeks.

On the weekly chart, the counter is near resistance levels of approximately Rs 210-220 (which is also its historical tops). Over the two months, the stock has seen 68 percent appreciation.

If already holding position, then one should book some profits at current market price. Also note that Rs 210-220 will be supply zone if retested gain.

Last but not the least, fresh buying in the counter is not advisable at current market price, as volume is not in sync with price action (volume is decreasing along with increase price action). On the daily chart, Radico Khaitan has been making higher highs and higher lows since the last couple of months. Also volume is picking up on a daily basis which is complementing its up move.

From indicator perspective, weekly RSI (relative strength index) is above 65 along with weekly stochastics is overbought which further confirms upside in counter. In previous trading session, the said counter has taken out all time high of Rs 671, which was registered on April 19 and closed near Rs 689 levels.

Since last couple of months it has been making higher highs and higher lows which confirms uptrend. On weekly scale RSI (relative strength index) is above 70 along with weekly stochastics is overbought which further confirms upside in counter.

One can buy in small tranches at current levels and buy another tranche at around Rs 650-655 levels (if again tested). Upside is expected till Rs 770 and support is seen around Rs 650 levels. 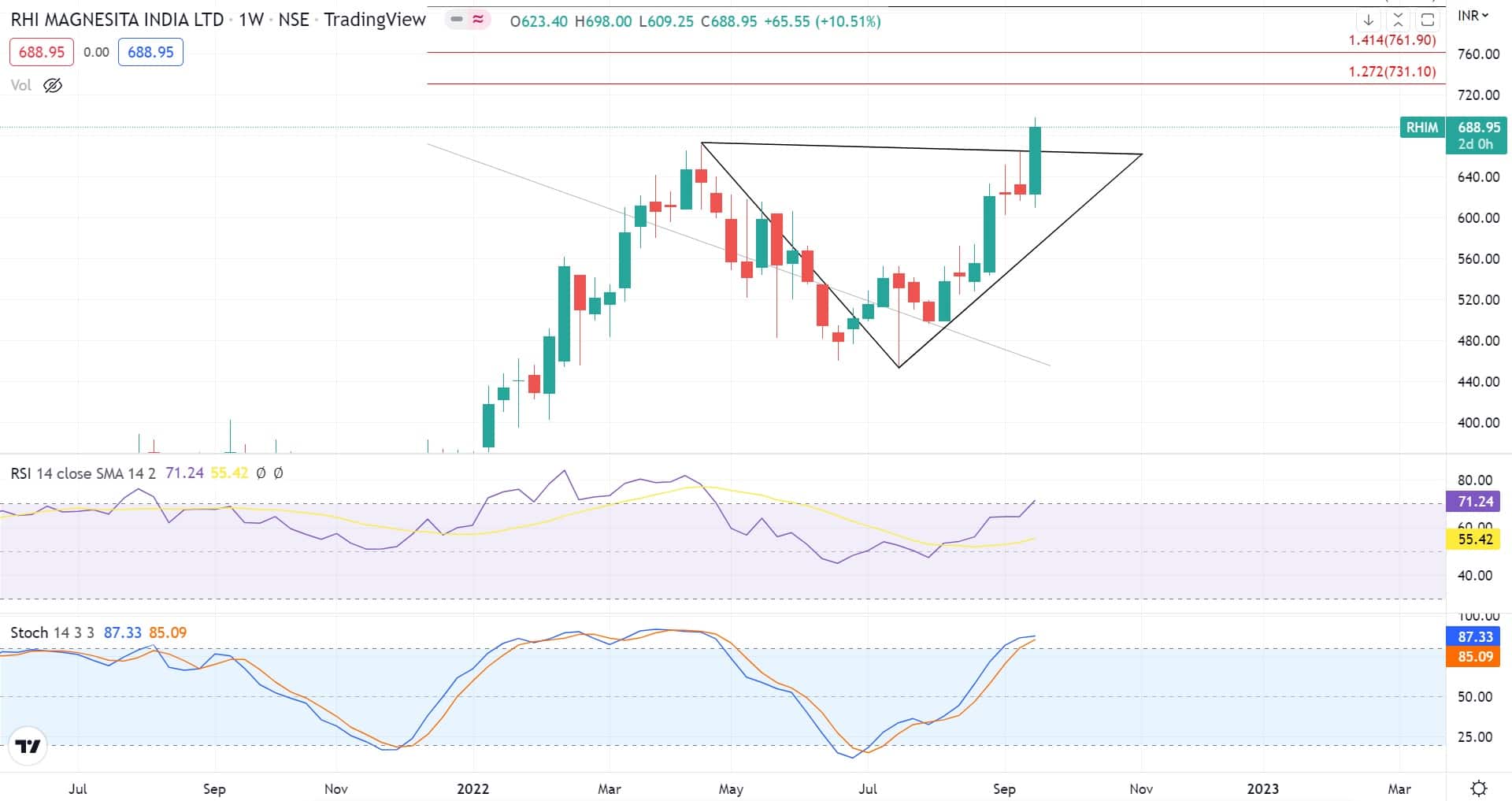 Disclaimer: The views and investment tips expressed by investment experts on Moneycontrol.com are their own and not those of the website or its management. Moneycontrol.com advises users to check with certified experts before taking any investment decisions.
Sunil Shankar Matkar
Tags: #EIH #Market Edge #Nifty #Radico Khaitan #RHI Magnesita India #Sensex #Trade Spotlight
first published: Sep 22, 2022 06:28 am