Trade Spotlight | What should you do with Himadri Speciality Chemical, Raymond, Adani Enterprises, Centrum Capital, JK Lakshmi Cement on Thursday?

What a classic setup we are having in JK Lakshmi Cement, precise Bullish bat pattern on daily chart with Classic Hammer & Inverted Hammer near potential reversal zone of Rs 430-450.

The market turned stronger and hit more than one-and-a-half-month high on March 30 with support from banking and financials, auto and technology stocks. The BSE Sensex rallied more than 700 points to 58,684, and the Nifty50 gained more than 170 points to close near 17,500, the highest closing level since February 10 this year, continuing uptrend for third straight session.

The broader markets also participated in the rally as the Nifty Midcap 100 index climbed 0.85 percent and Smallcap index gained 0.97 percent.

Stocks that were in action include Himadri Speciality Chemical which gained 3.5 percent at Rs 73.20, Raymond which surged little more than 11 percent to Rs 838, Adani Enterprises which climbed 4 percent to Rs 1,995, Centrum Capital which spiked 20 percent to Rs 26.85, and JK Lakshmi Cement which was up more than 6 percent to Rs 471.

HSCL has consolidated since the last couple of years in the range of Rs 40-70. Recently the stock has given a clean breakout on weekly chart along with volume picking up and RSI (relative strength index) at approximately Rs 71, which is an early sign of further up move.

Last but not the least, HSCL has formed a bullish bat on the weekly chart. The best part about this pattern is that it took four years to complete (more time taken to complete is more favourable).

One can buy in small quantities at current levels and another around Rs 62 levels with a target of Rs 110 with good support seen at Rs 50 levels. Though Raymond looks lucrative at current levels, one should wait because Raymond is trading near its previous historical tops.

Massive resistance is seen around Rs 860-870 and CMP is Rs 837.7 along with volume picking up at higher levels which is an exhaustion sign. As of now wait and watch for Raymond. 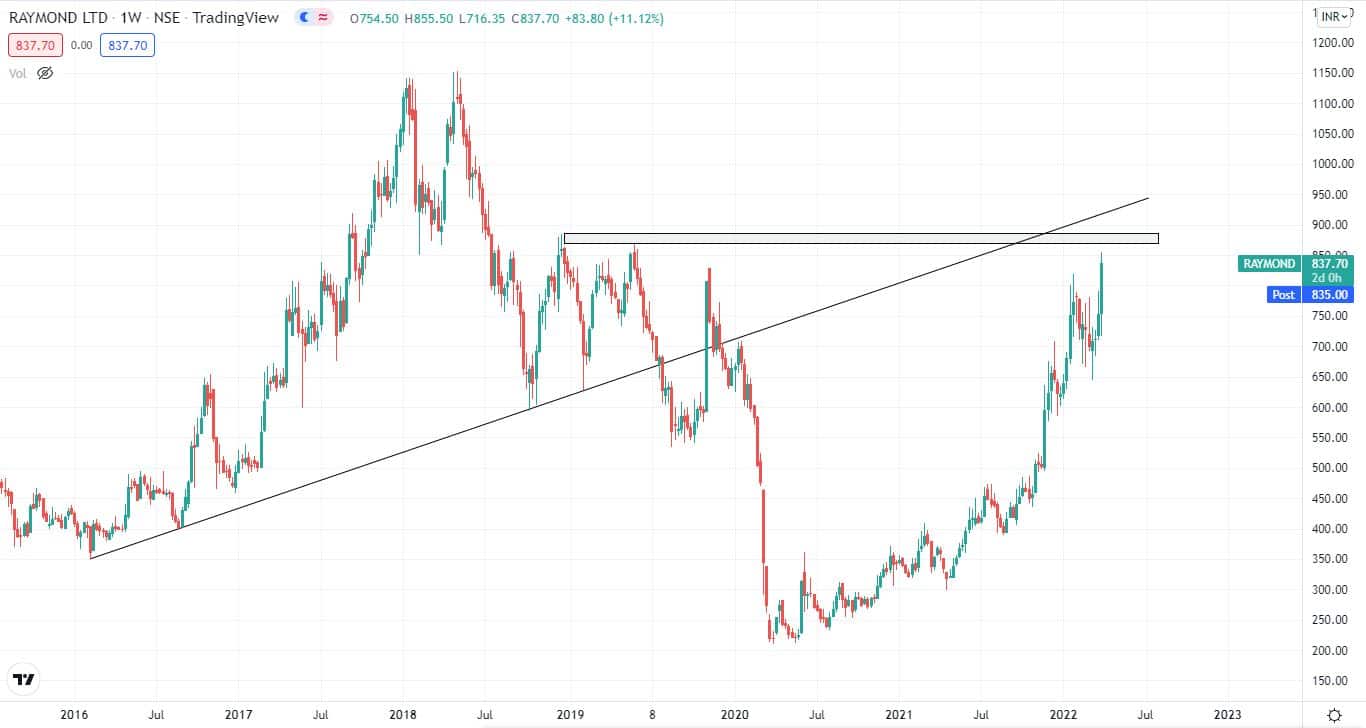 Adani Enterprises has closed at all-time high of Rs 1,995 approximately after giving a clean breakout from the channel pattern. What is more interesting to see is that on the weekly chart Adani Enterprises is displaying reverse divergence on MACD (moving average convergence divergence) i.e since June 2021 till February 2022, price is making higher lows and higher highs but MACD is making lower lows and lower highs which is a very positive sign.

From investor perspective, one can buy at current levels with upside of Rs 2,285 and Rs 1,850 as good support. 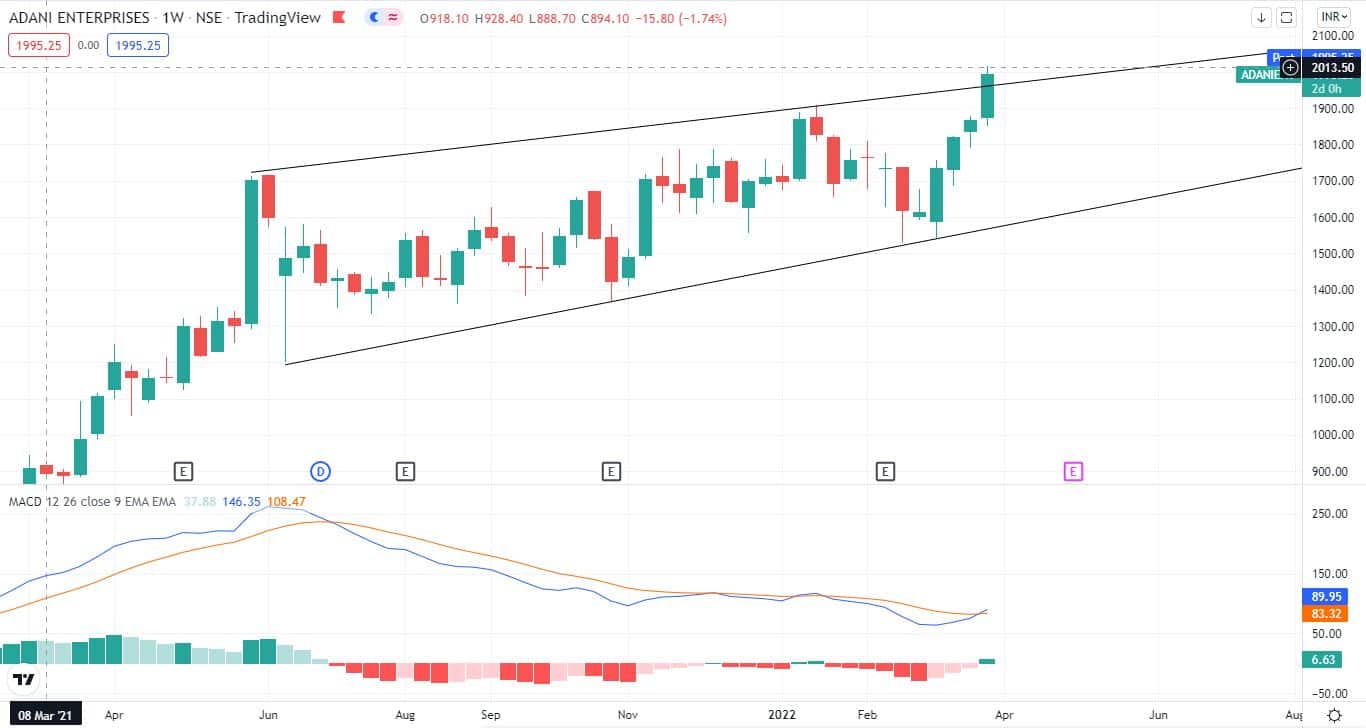 In the current scenario, the stock has formed a bullish AB=CD Pattern with potential reversal zone of 22-23. In the last trading session, the counter has reversed 19.87 percent from PRZ (potential reversal zone). On indicator front 14 periods daily RSI (relative strength index) is displaying impulsive behaviour in the oversold zone which is a sign of early reversal.

Looks like the counter is ready for an up move. One should add at current levels in small quantities and wait for some dip till Rs 23. Upside is expected till Rs 36 and historical support is seen at Rs 21. What a classic setup we are having in JK Lakshmi Cement, precise Bullish bat pattern on daily chart with Classic Hammer & Inverted Hammer near potential reversal zone of Rs 430-450.

From an investor perspective, these are lucrative levels from which one can add in small quantities and add another tranche at Rs 450 levels. Upside is seen till Rs 600 levels with Rs 420 as good support. 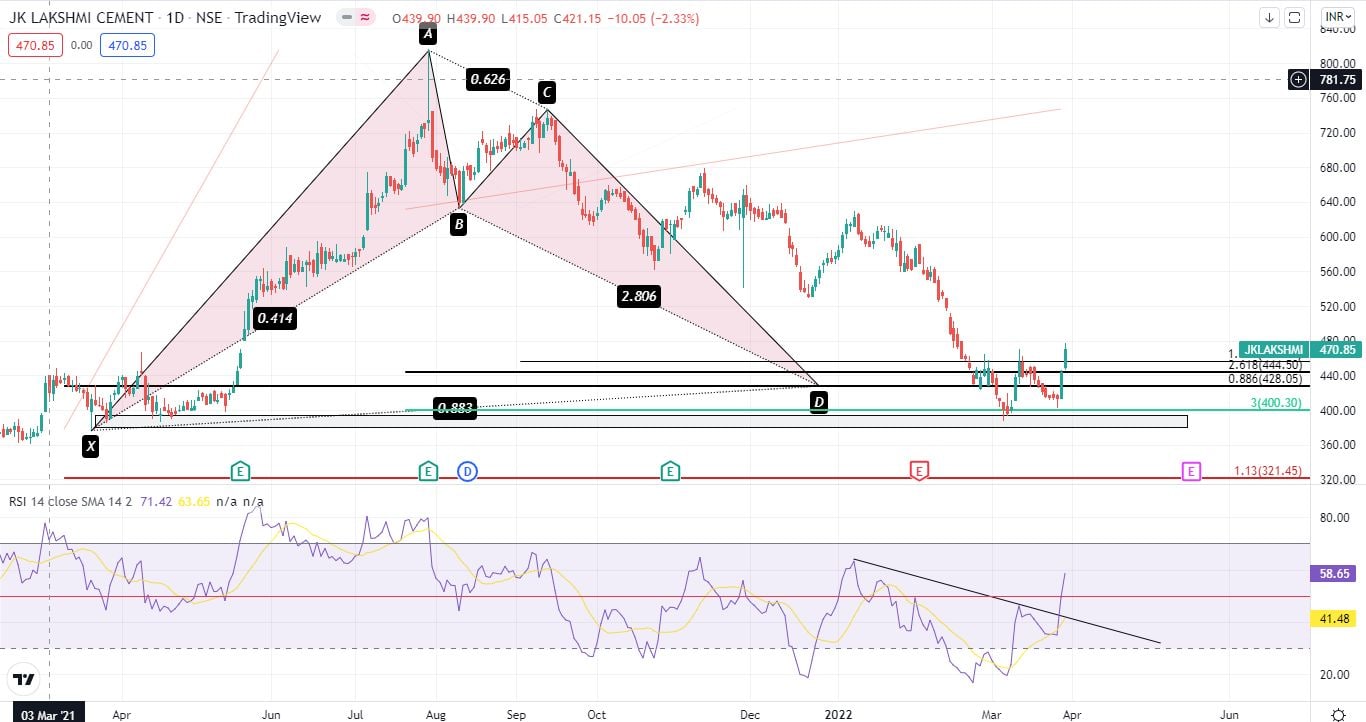