Trade Spotlight | What should you do with eClerx Services, Balaji Amines, Coal India, Bal Pharma and Birlasoft?

Here's what Malay Thakkar of GEPL Capital, recommends investors should do with these stocks when the market resumes trading today.

The market had a strong show on the first trading day (January 3) of New Year 2022, with the BSE Sensex rising more than 1,000 points intraday and the Nifty50 closing above 17,600 for the first time since November 18.

All sectoral indices, barring pharma, aided the rally with bank, financial services, auto, metal, and IT being the prominent gainers, rising 1-2.7 percent.

Stocks that were in focus include Coal India which was the biggest gainer in the Nifty50 as well as the futures and options segment, rising 6.33 percent to Rs 155.30, and Bal Pharma, which was locked in the 20 percent upper circuit at Rs 127.

Here's what Malay Thakkar of GEPL Capital, recommends investors should do with these stocks when the market resumes trading today:

eClerx has recently broken out of a six-month consolidation of Rs 1,980-2,500 (rectangle formation) with an increase in volume activity indicating bullish sentiment in the stock.

Going ahead, Rs 2,500 will act as a major support for this counter. One can continue holding this stock expecting the stock to move higher towards Rs 3,100 followed by Rs 3,250. 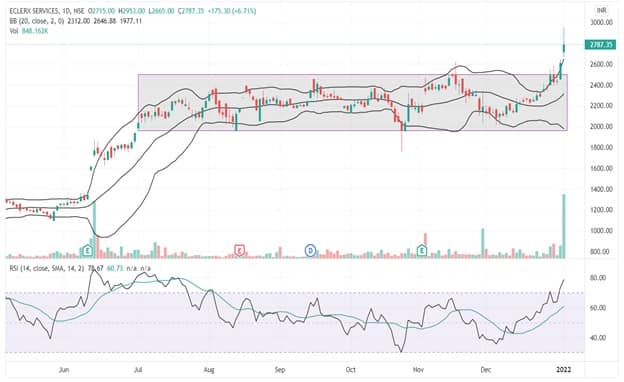 Balaji Amies seems to have halted its down move that started ever since the prices made a life of Rs 5,223 in September 2021.

The prices have taken support at its 200-day moving average and were consolidating in a rectangle formation between Rs 2,900 and Rs 3,400 since the last two months.

Recently prices have broken out of the consolidation, the move was backed by a good volume build-up, indicating participation in the up move.

The prices have broken above the Higher Bollinger band and the Bollinger bands are expanding, indicating the possibility of a trending move.

One can continue holding this stock and expect good upside in this stock towards Rs 4,050, followed by Rs 4,480 levels. A stop-loss at Rs 3,350 should be maintained for this setup. 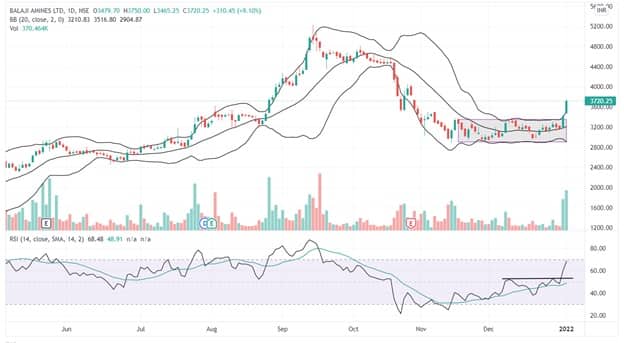 On the long-term, Coal India is moving in a downtrend. The stock has not participated in the market rally. The stock has just broken above the 20-day SMA (Rs 148) which was acting as a resistance.

On the indicator front, RSI on daily charts also confirms the breakout and has moved above 50, indicating bullish momentum in the short term.

Upside towards Rs 164 followed by Rs 172 can be expected in the short in shorter term. We would advise the investors to use this up move towards Rs 164 and Rs 172 to exit from this position. Bal Pharma has broken out of an eight-month-long consolidation with highest volume in the last eight months indicating strong bullish momentum in the stock.

The stock has formed a strong Bullish Marubozu candle on daily timeframe. The RSI indicator has moved to the oversold territory (above 70) for the first time since May 2021.

Traders can continue holding this stock and expect the prices to move towards Rs 142 immediately followed by Rs 165 levels. A stop-loss at Rs 115 should be maintained for this trade. On the mid-term charts, Birlasoft is moving with a Higher High and Higher Lows formation, indicating that the upward trend is intact in the stock.

The stock had recently broken out of a two-month consolidation (rectangle formation) and has been moving higher since then.

On the indicator front, the RSI plotted on the daily time frame can be seen moving higher towards the overbought level after forming a bullish hinge near the 45 mark, indicating increasing bullish momentum in prices.

Going forward we expect the prices to move higher towards Rs 620 and if prices manage to sustain above this level we might see prices move higher Rs 660 mark eventually.

Investors holding this stock can continue to hold on to their position with a stop-loss of Rs 515 and expect the stock to move higher towards Rs 660 level. Disclaimer: The views and investment tips expressed by investment experts on Moneycontrol.com are their own and not those of the website or its management. Moneycontrol.com advises users to check with certified experts before taking any investment decisions.
Sunil Shankar Matkar
Tags: #Balaji Amines #Birlasoft #Coal India #eClerx Services #Nifty #Sensex #Stocks Views #Technicals #Trade Spotlight
first published: Jan 4, 2022 07:01 am