Trade Spotlight | What should investors do with ONGC, HEG, Sheela Foam, Zee Entertainment on Tuesday?

Traders and investors should continue holding ONGC and can expect upside towards Rs 195. A break above of Rs 195 will increase the momentum to take prices towards Rs 210 levels. Downside support for the stock is now placed at Rs 175 level.

It was yet another day of bears who pulled down the Nifty50 well below crucial 16,000 mark on March 7. Weak global cues after oil prices jumped over $130 a barrel on a possible fear of US and European nations banning Russian oil & natural gas weighed on the market sentiment.

The benchmark equity indices closed in the red for fourth consecutive session on Monday. The BSE Sensex fell nearly 1,500 points to 52,843 and the Nifty50 declined 382 points to 15,863, taking total loss to 6 percent and 5.5 percent respectively in four straight days.

Banking & financials, auto, and FMCG stocks dragged the market to seven-month low. The selling pressure was also seen in broader space as the Nifty Midcap 100 and Smallcap 100 indices dropped 2 percent each.

On the medium charts, ONGC is moving with higher highs and lows formation since March 2020. On weekly charts, the stock is continuously taking support and bouncing off the 20-week simple moving average (SMA - Rs 155).

On the indicator front, the relative strength index (RSI) plotted on weekly has witnessed a range shift and is sustaining above the 50 mark since January 2021.

Traders and investors should continue holding the stock and can expect upside towards Rs 195. A break above of Rs 195 will increase the momentum to take prices towards Rs 210 levels. Downside support for the stock is now placed at Rs 175 level. On mid term charts, HEG is moving with lower highs and lows formation. The stock has corrected more than 50 percent after making a high of Rs 2,629.

In Monday's session, the stock has shown relative outperformance and gained 13 percent irrespective of the weakness in the market. The RSI on weekly scale has dipped below the 40 mark.

Traders and investors should use the up move towards Rs 1,400-1,450 to exit for the stock. On long term charts, Sheela Foam is moving in an uptrend and the stock has been taking support at its 20-week SMA (Rs 3,235) throughout its up move.

The stock has shown relative strength and is trading very close to its life highs. The RSI indicator has witnessed a range shift and is sustaining above the 50 mark since January 2021.

One can continue holding the stock has expect it to move higher towards Rs 3,950 followed by Rs 4,240 levels. Downside support for the stock is now placed at Rs 3,250 level. 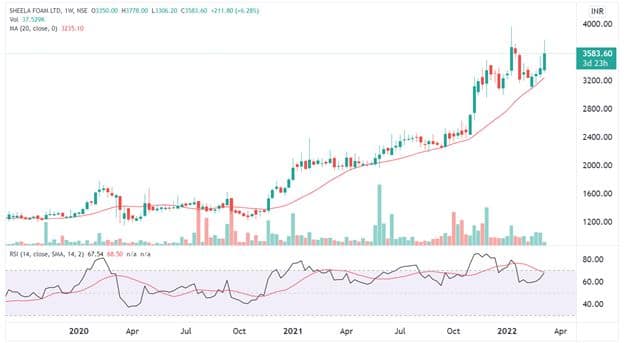 On long term charts, ZEE is moving in a downtrend forming lower highs and lows. The stock is facing resistance from the 20-Day SMA (Rs 250).

The RSI has dipped below and sustained below the 50 mark. One should look to exit from the stock on a pullback towards Rs 250 followed by Rs 265.

A break below Rs 220 level on the downside will escalate fresh selling in the counter.

Disclaimer: The views and investment tips expressed by investment experts on Moneycontrol.com are their own and not those of the website or its management. Moneycontrol.com advises users to check with certified experts before taking any investment decisions.
Sunil Shankar Matkar
Tags: #HEG #Market Edge #Oil and Natural Gas Corporation #ONGC #Sheela Foam #Stocks Views #Technicals #Trade Spotlight #Zee Entertainment Enterprises
first published: Mar 8, 2022 07:41 am