"Hold on to existing positions in Metropolis Healthcare if any but fresh longs are not advisable at the current juncture until there's a strong follow-up momentum with high volumes."

The market fell for the first time in the last four consecutive sessions on April 5, partly due to profit booking and weakness in European peers. Remember, the benchmark indices gained more than three percent in the previous three days.

The BSE Sensex corrected more than 400 points to 60,176 and the Nifty50 declined nearly 100 points to close below 18,000 mark but experts say unless and until the index holds crucial support of 17,700 levels sharp correction is unlikely in coming days.

However, the broader markets outperformed benchmarks and continued uptrend. The Nifty Midcap and Smallcap indices gained 1.4 and 0.85 percent respectively.

Banks and financial services dragged the market on Tuesday as both indices were down around 1.5 percent each.

Among others, Swan Energy and Dilip Buildcon hit 20 percent upper circuit to close at Rs 243 and Rs 302 respectively while Gujarat Pipavav Port climbed 12 percent to Rs 91.35.

The stock has a seen a sharp correction in last three months where prices have fallen from Rs 3,500 to almost a low of Rs 1,500. The momentum readings were deeply oversold after this correction and the stock was near its long term support of weekly 200 EMA (exponential moving average).

Hence, we have seen a sharp pullback in the last few sessions and a surge was seen in the last couple of sessions. Looking at the chart structure, it seems that the corrective phase may be over for the stock but it will be a daunting task for a sustained upmove in the near term.

Traders stuck in long positions will look to exit in such upmoves which could lead to higher supply. Also, the 200-day moving average on the daily chart is around Rs 2,570 which acted as a hurdle in Tuesday's session.

We advise traders to hold on to existing positions if any but fresh longs are not advisable at the current juncture until there's a strong follow-up momentum with high volumes. The immediate support is now placed around Rs 2,100 while Rs 2,570 and Rs 2,650 are the hurdles. 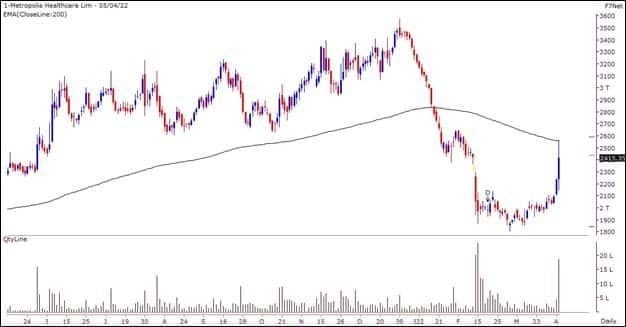 Within a broader uptrend, the stock has seen a consolidation phase for the last few months. This just seems to be a time-wise correction within an uptrend and after taking support around its 200 DEMA, the stock has given a breakout on Tuesday with good volumes.

This should lead to a resumption of the uptrend and hence the trader should look for buying opportunities on any declines. The stock has been forming a 'Higher Top Higher Bottom' indicating an uptrend. In Tuesday's session, the stock rallied sharply with better than average volumes and was locked in upper circuit indicating robust buying interest. Hence, traders with existing long positions should hold on to the positions and continue to ride the trend until any reversal is seen.

However, the RSI (relative strength index) oscillator on the daily time frame chart is deeply overbought and hence risk-reward ratio for fresh entry is not favourable.

Hence, one should wait for either a time-wise correction or a small price-wise retracement for a better risk-reward setup.

The support for the stock is placed around Rs 210 while the potential near-term target is seen around Rs 275 as per the retracement theory. This stock has underperformed the broader markets and has corrected sharply in the last six months. Momentum readings were deeply oversold and stock prices were near the support zone of previous swing lows. Hence, we witnessed a sharp upmove in Tuesday's session and the stock was locked in upper circuit.

However, until we see a 'Higher Top Higher Bottom' formation on short term charts, it would be a high risk bet to buy this stock as per the current chart structure.

Hence, we advise to avoid the stock and look for better opportunities in the broader markets. Traders with existing positions can expect a pullback up to Rs 355 and one can look to lighten up longs in such pullbacks. The stock has corrected sharply in the last few months, but we have not seen any high volumes in the stock during the corrective phase. The prices witnessed upmove with high volumes on Tuesday which is a good sign.

However, on the daily chart, the 200 DEMA has usually played a vital role and during the uptrend the stock witnessed buying interest whenever the prices approached the moving average support and, once that was broken, the same average has been acting as a resistance.

The 200 DEMA which is now around Rs 96 needs to be surpassed for a change in polarity. Traders with existing positions can continue to hold the stock, while a move above Rs 96 is likely to attract fresh buying interest as well.

The immediate support for the stock is placed in the range of Rs 84-82. Disclaimer: The views and investment tips expressed by investment experts on Moneycontrol.com are their own and not those of the website or its management. Moneycontrol.com advises users to check with certified experts before taking any investment decisions.
Sunil Shankar Matkar
Tags: #Dilip Buildcon #Gujarat Pipavav Port #Market Edge #Metropolis Healthcare #Polycab India #Stocks Views #Swan Energy #Technicals #Trade Spotlight
first published: Apr 6, 2022 08:06 am