Gaurav Ratnaparkhi of Sharekhan by BNP Paribas feels the index is expected to form another leg on the downside.

It was a weak start to the July series on June 28 as the bears retained power for a major part of the session as traders turned cautious ahead of the Union Budget week.

"The Nifty is currently stuck in a high low range of 11,900-11,650 levels, and is currently showing weakness from near the upper end of the range. Technically, pattern formed on weekly scale could be considered as a high wave type pattern, which is currently placed at the crucial support of 11,650 levels (upper area of opening upside gap of 20th May)," Nagaraj Shetti – Senior Technical & Derivative Analyst, HDFC Securities told Moneycontrol.

He said the short term trend of Nifty remains rangebound. "We could expect further weakness in the early part of the next week, but are likely to see buying emerging from near the support of 11,700-11,650 again."

Gaurav Ratnaparkhi, Senior Technical Analyst at Sharekhan by BNP Paribas also feels that the index is expected to form another leg on the downside. "The broader market indices are also likely to follow the suit. Thus traders are recommended to look for selling opportunities in the market."

The broader markets also fell in line with benchmarks as the Nifty Midcap index was down 0.36 percent and Smallcap index declined 0.2 percent. All sectoral indices closed in red barring FMCG and Realty.

Maximum Call open interest (OI) of 14.41 lakh contracts was seen at the 12,000 strike price. This will act as a crucial resistance level for the July series.

Maximum Put open interest of 15.47 lakh contracts was seen at the 11,500 strike price. This will act as a crucial support level for the July series. 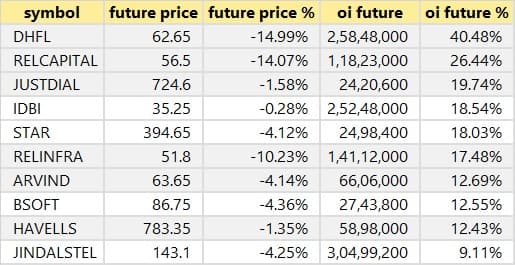 Procter & Gamble Hygiene & Healthcare: The board to consider FY19 results and dividend on August 21.

Amber Enterprises: The company will be participating in a non-deal roadshow to meet investors, organised by SBI Caps Securities on July 2, in London, UK.

Torrent Power: The company's officials will meet analyst of Emkay Global on July 1.

Rain Industries: A board meeting is scheduled on August 13 to declare financial results for the June quarter.

Zuari Agro Chemicals: A Board meeting is scheduled on August 12 to declare financial results for the June quarter.

Finolex Industries: The Company's officials will meet investors/analysts on July 1 and 2.

Zuari Global: A board meeting is scheduled on August 14 to declare financial results for the June quarter.

TTK Healthcare: A board meeting is scheduled on August 9 to declare financial results for the June quarter.

Elecon Engineering: A board meeting is scheduled on July 26 to declare the financial results for the June quarter.

Shree Cement: A board meeting is scheduled on August 9 to declare the financial results for the June quarter.

Info Edge (India): A board meeting is scheduled on August 13 to declare the financial results for the June quarter.

Jet Airways: Hinduja-Etihad consortium is gearing up to bid for the company under IBC; the Tata Group is exploring potential bid but has not taken final call yet.

ONGC: The company is seeking partners to bid for 64 oil, gas producing fields.

Eveready Industries: The company proposed to enter into an transfer/assignment /license agreement with Madhu Jayanti International Private (MJlPL) for transfer and/or license of the relevant and other trademarks (valued at Rs 6 crore) identified assets, if any, relating to the packet tea products of MJlPL.

Syndicate Bank: The board approved to raise capital up to Rs 500 crore during FY 2019—20 by way of qualified institutional placement (DIP) / Follow on public issue preterenlial allotment or any other mode.

Deepak Nitrite: The company, through its wholly owned subsidiary Deepak Phenolics (DPL), achieves a major milestone towards the manufacture of phenol and acetone with an average capacity utilisation of around 80 percent, and having achieved a peak capacity utilization of 100 percent in Q4 FY19 contributes Rs 927 crore to consolidated turnover of Rs 2,715 crore.

NMDC: The company terminates its contract with BHEL for delay in Rs 1,395 crore project.

United Van Der Horst: The company approved the raising of funds by way of creating, offering, issuing and allotting 3,80,000 equity shares of face value of Rs 10 each on preferential basis.

Emco: Archana Capoor resigned from the position of the Independent Director of the company.

Reliance Home Finance: Maturity of certain NCDs of Rs 400 crore has been extended till October 31, 2019, with the formal written consent of the concerned Debenture Trustees and NCD holders.

Godrej Properties: QIP committee approved the issue and allotment of 2,26,29,310 equity shares to eligible QIB at the issue price of Rs 928, aggregating to Rs 2,100 crore, pursuant to the issue.

Inox Leisure: The company announced the commencement of its commercial operations of multiplex cinema theatre taken on lease basis in Hyderabad.

SJVN: Company signed a Memorandum of Understanding (MoU) with NEEPCO (North Eastern Electric Power Corporation Limited) for joint development of power projects in India and abroad with an immediate focus on north-east and the eastern region of the country.

Amber Enterprises: The company extended the timeline to complete the acquisition of balance stake of 51 percent in Ever Electronics  by August 31, 2019 in one or more tranches.

ABC India: The company received an order of Rs 137.70 crore from BHEL for multimodal transportation of export project cargo from India to the MSTPP Rampal Project in Bangladesh.

JK Paper: CRISIL revised its outlook from 'stable' to 'positive' and upgraded its rating of the company.

Datiware Maritime Infra: The company commenced the work order received for the fabrication and the assembly of floating gates of drydocks for the end client Indian Navy.

UPL: The company completed acquisition of Industrias Bioquim Centroamericana, Sociedad Anónima, a company based out of Costa Rica.

One stock under F&O ban period on NSE

For July 1, DHFL is under the F&O ban period.