The near term trend of Nifty is rangebound with weak bias and the crucial lower supports to be watched for the next week is at 11,760, said Nagaraj Shetti of HDFC Securities

"A long negative candle was formed on June 14 and the Nifty is placed near the crucial support of 11,770, which is a strong support level as per the concept of change in polarity," Nagaraj Shetti - Technical Research Analyst, HDFC Securities told Moneycontrol.

"We observe a formation of head and shoulder type pattern as per daily timeframe chart (not a classical one) with the neckline placed at 11,770 levels. Hence, a decisive move below this neckline support could open up a potential downside pattern target of 11,525 in the near term (this pattern could activate only on a decline below the support of 11,770)," he said.

The near term trend of Nifty is rangebound with weak bias and the crucial lower supports to be watched for the next week is at 11,760, he added.

"In terms of the price patterns, the running triangular pattern looks intact with a mild throw under. The daily Bollinger Bands, being in a contraction phase, suggests the rangebound activity can continue in the next few sessions. The Nifty will be set for the next up move once the consolidation is over," he added.

The broader markets also fell in line with benchmarks. The Nifty Midcap index dropped 0.9 percent and Smallcap index 0.8 percent as five shares declined for every two shares rising on the NSE.

Maximum Call open interest (OI) of 24.40 lakh contracts was seen at the 12,000 strike price. This will act as a crucial resistance level for the June series.

Maximum Put open interest of 26.68 lakh contracts was seen at 11,500 strike price. This will act as a crucial support level for the June series. 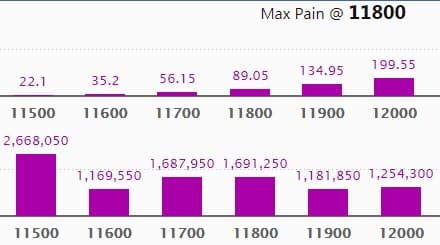 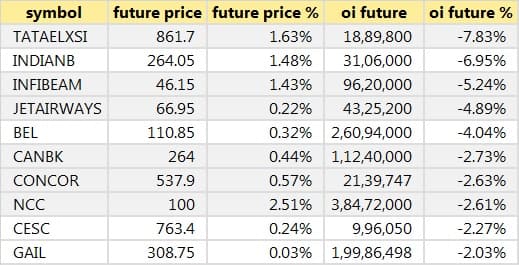 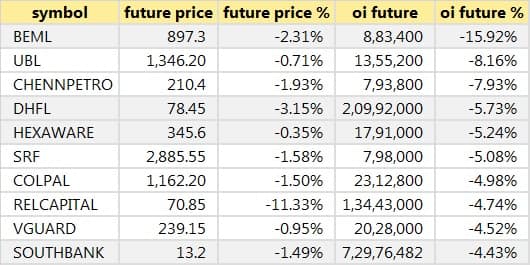 Aster DM: ICRA upgraded credit rating to BBB+ from A-; outlook changed to Positive from Stable.

Jaypee Infra: Committee Of Creditors will meet on June 20.

Bharat Financial: Company assigns a pool of receivables worth Rs 1,546 crore to a private bank.

DHFL: Company made principle payment of Rs 100 crore and interest of Rs 25.5 lakh on NCDs due June 14.

Laurus Labs: USFDA completed inspection of API facilities in Units 1 and 3 with two observations that are procedural in nature.

FDC: Compamy has been granted ANDA approval by USFDA, for Dorzolamide and Timolol Ophthalmic solution USP 22.3mg/6.83mg per ml, a generic version of Cosopt of Oak Pharmaceuticals Inc.

PG Electroplast: Fire broke out on June 15 in washing machine division of the company, Greater Noida, UP.

Indraprastha Medical Corporation: Ashok Bajpai resigned from the position of Managing Director of the company due to personal reasons.

Divi's Laboratories: The USFDA concluded inspection of Unit-II at Bheemunipatnam, Andhra Pradesh with no observations. This was a general cGMP inspection by the USFDA.

Relaxo Footwears: Company has fixed June 27 as the record date to determine eligible shareholders entitled to receive the bonus shares.

CreditAccess Grameen: Company appointed BR Diwakar, CFO, as an additional director on the board.

Unitech: Board meeting is scheduled on June 25 to consider and approve the audited financial results for the quarter and year ended on March 31, 2019.

Mphasis: Company will be meeting investors/analysts on one-on-one basis on June 18 and 19 in Mumbai.

RITES: Board meeting is scheduled to be held on June 24 to consider the proposal for issuance of bonus shares.