Based on the open interest future percentage, there were 47 stocks in which a long build-up was seen, including Crompton Greaves Consumer Electrical, United Breweries, Alkem Laboratories, Dixon Technologies, and Federal Bank

The market wiped out all its gains and closed flat with a negative bias on September 27, continuing the downtrend for the fifth consecutive session. Banking and financial services, auto, and metal stocks were under pressure, whereas FMCG, IT, pharma, and oil and gas stocks supported the market.

"A reasonable negative candle was formed on the daily chart, that has placed beside the similar negative candle of the previous session. Technically, this pattern signals broader rangebound action in the market with weak bias. This pattern also indicates a lack of strength in the intraday upside bounce. This is not a good sign and one may expect further weakness in the short term," Nagaraj Shetti, Technical Research Analyst at HDFC Securities said.

The Nifty is temporarily halting its weakness near the crucial lower support of 16,800 levels, as per the concept of change in polarity. The area of 16,800 has acted as an important value zone and has resulted in significant movement from its support, resistance and breakouts in the past.

Hence, having declined swiftly from the highs of 18,000 mark this time, there is a possibility of a sustainable upside bounce in the market from near this support. Immediate resistance is placed around 17,150-17,200 levels, the market expert said.

The broader markets have outperformed the benchmark indices. The Nifty Midcap 100 and Smallcap 100 indices gained 0.16 percent and 0.25 percent respectively.

The Nifty Bank remained in negative terrain, declining 257 points to 38,359 and formed a bearish candle on the daily charts on September 27. The important pivot level, which will act as crucial support for the index, is placed at 38,012, followed by 37,666. On the upside, key resistance levels are placed at 38,878 and 39,397 levels.

Maximum Call open interest of 86.02 lakh contracts was seen at 18,000 strike, which will act as a crucial resistance level in the September series.

Maximum Put open interest of 61.36 lakh contracts was seen at 16,000 strike, which will act as a crucial support level in the September series.

A high delivery percentage suggests that investors are showing interest in these stocks. The highest delivery was seen in REC, Abbott India, Godrej Consumer Products, HDFC, and Bharti Airtel, among others. 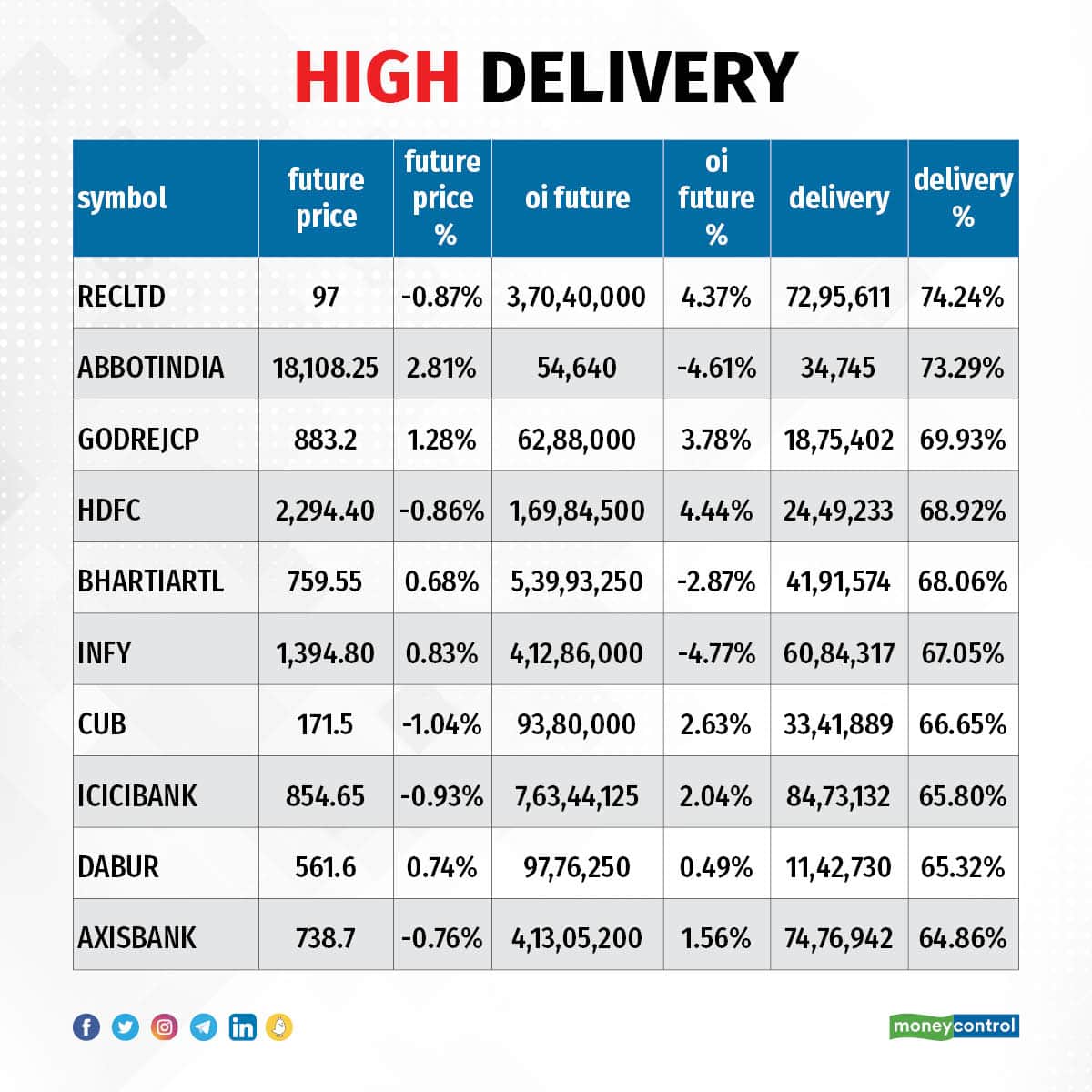 An increase in open interest, along with an increase in price, mostly indicates a build-up of long positions. Based on the open interest future percentage, here are the top 10 stocks in which a long build-up was seen including Crompton Greaves Consumer Electrical, United Breweries, Alkem Laboratories, Dixon Technologies, and Federal Bank. 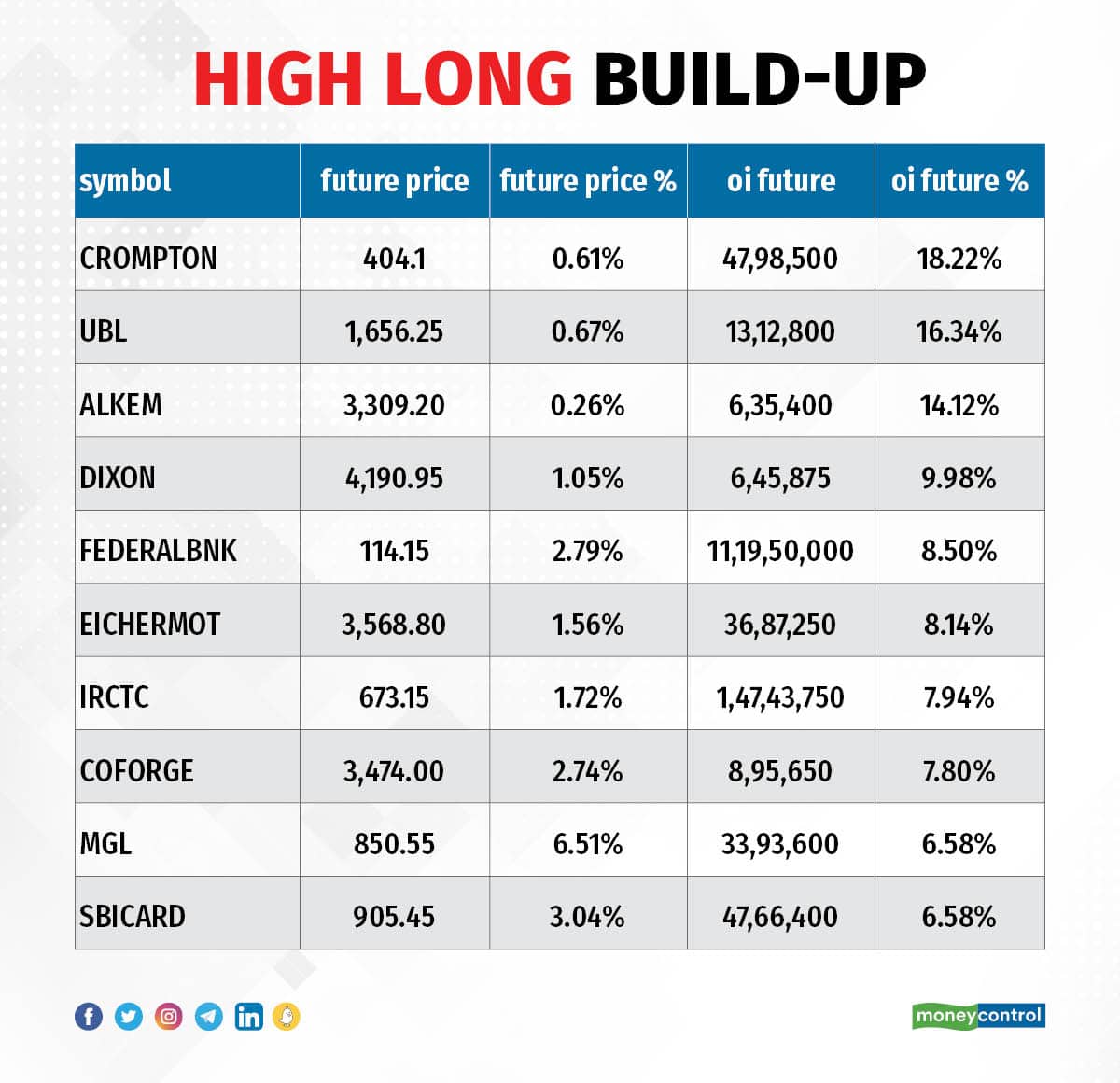 A decline in open interest, along with a decrease in price, mostly indicates a long unwinding. Based on the open interest future percentage, here are the top 10 stocks including Nifty Financial, Bajaj Auto, Metropolis Healthcare, Page Industries, and ACC, in which a long unwinding was seen. An increase in open interest, along with a decrease in price, mostly indicates a build-up of short positions. Based on the open interest future percentage, the top 10 stocks in which a short build-up was seen include Bharat Electronics, Ashok Leyland, Bharat Forge, Deepak Nitrite, and Atul. A decrease in open interest, along with an increase in price, mostly indicates a short-covering. Based on the open interest future percentage, here are the top 10 stocks, in which a short-covering was seen including Voltas, Escorts, IndiaMART InterMESH, Gujarat Gas, and Coromandel International. 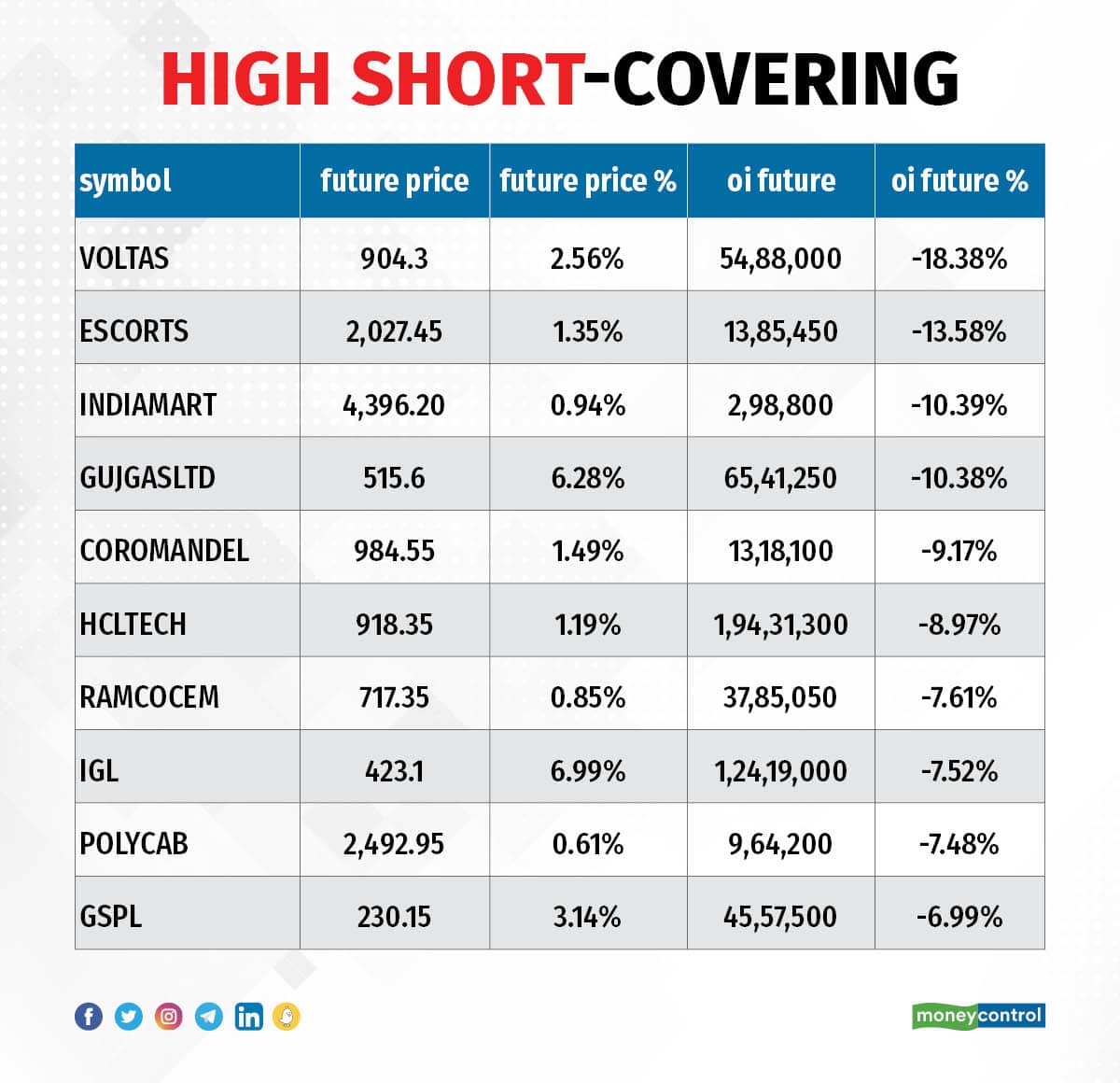 Ramkrishna Forgings: BofA Securities Europe SA bought 20,99,996 equity shares in the company at an average price of Rs 178 per share. 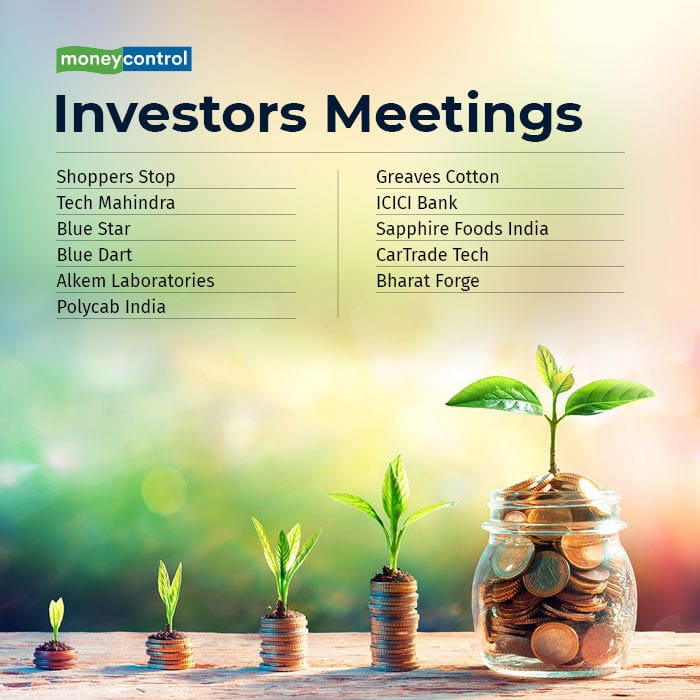 Shoppers Stop: Officials of the company will be meeting representatives of Invesco Asset Management.

Greaves Cotton: Officials of the company will interact with Pine Bridge.

ICICI Bank: Officials of the bank will interact with Jefferies Global Fund Managers.

Motherson Sumi Wiring India: The company said the board of directors will meet on September 30 to consider a proposal for the issuance of bonus shares to the equity shareholders of the company.

Bharat Petroleum Corporation: Life Insurance Corporation of India has acquired an additional 2.01 percent stake in the company via open market transactions. With this, its shareholding in the company increased to 9.04 percent, up from 7.03 percent earlier.

Torrent Pharmaceuticals: The company has acquired Curatio Healthcare, which has a strong presence in the cosmetic dermatology segment with a portfolio of over 50 brands, for Rs 2,000 crore. It has entered into definitive agreements to acquire 100 percent in Curatio which reported revenue for FY21-22 at Rs 224 crore. Two stocks - Vodafone Idea, and Zee Entertainment Enterprises - are on the NSE F&O ban list for September 28. Securities thus banned under the F&O segment include companies where derivative contracts have crossed 95 percent of the market-wide position limit.

Disclaimer: The views and investment tips expressed by investment experts on Moneycontrol.com are their own and not those of the website or its management. Moneycontrol.com advises users to check with certified experts before taking any investment decisions.
Sunil Shankar Matkar
Tags: #Market Cues #Market Edge #Nifty #Sensex #Trade Setup
first published: Sep 27, 2022 10:39 pm