Based on the open interest future percentage, there were 100 stocks in which short-covering was seen including Hero MotoCorp, MCX India, IRCTC, Ipca Laboratories, and Hindalco Industries.

Bulls strengthened their control over Dalal Street on September 20, helping the benchmark indices gain 1 percent following an uptrend in Asian peers, though other global peers were under pressure ahead of the outcome of the Federal Reserve meeting.

The BSE Sensex jumped 578 points to 59,720, while the Nifty50 rose 194 points to 17,816 and formed a decent bullish candle which resembles the Shooting Star kind of pattern formation on the daily charts.

"On the daily charts, the Nifty tried to feel the upside gap but was unable to close the gap and formed Shooting Star candle pattern indicating selling pressure at higher levels. However, it has managed to sustain above its 20-day SMA (simple moving average - 17,692) with the formation of the higher top higher bottom," Vidnyan Sawant, AVP - Technical Research at GEPL Capital said.

The momentum indicator RSI (relative strength index) is moving in an upward direction and placed at the 56 mark which shows the momentum is on the slightly positive side.

As per the overall chart pattern and indicator set-up, Vidnyan feels that the Nifty is not giving clear clue before the FOMC meet. However, it is positively biased and the broader range of the Nifty will be 17,380 - 18,096 levels for the short to medium term. 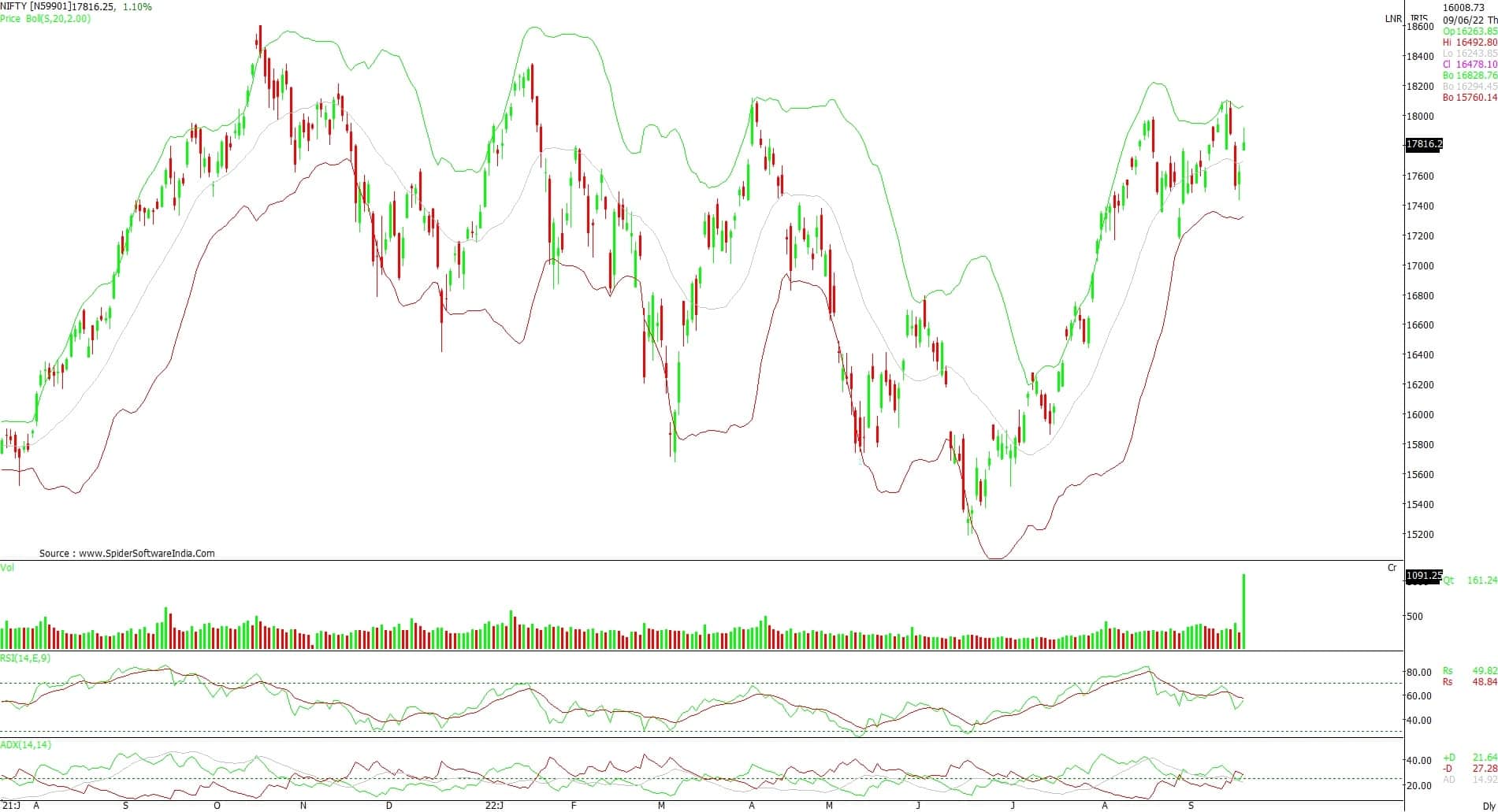 The broader markets also participated in rally as the Nifty Midcap 100 and Smallcap 100 indices climbed more than one percent each.

Maximum Call open interest of 30.77 lakh contracts was seen at 18,000 strike, which will act as a crucial resistance level in the September series.

Maximum Put open interest of 30.58 lakh contracts was seen at 16,500 strike, which will act as a crucial support level in the September series.

A high delivery percentage suggests that investors are showing interest in these stocks. The highest delivery was seen in Power Grid Corporation of India, Honeywell Automation, United Breweries, NTPC, and Britannia Industries, among others.

An increase in open interest, along with an increase in price, mostly indicates a build-up of long positions. Based on the open interest future percentage, here are the top 10 stocks in which a long build-up was seen including Cipla, Gujarat Gas, Rain Industries, JK Cement, and Honeywell Automation.

A decline in open interest, along with a decrease in price, mostly indicates a long unwinding. Based on the open interest future percentage, here are the top 10 stocks including Escorts, India Cements, Apollo Tyres, Delta Corp, and Granules India, in which long unwinding was seen.

An increase in open interest, along with a decrease in price, mostly indicates a build-up of short positions. Based on the open interest future percentage, the 8 stocks in which a short build-up was seen include Can Fin Homes, Indian Oil Corporation, ABB India, Vedanta, and MRF.

A decrease in open interest, along with an increase in price, mostly indicates a short-covering. Based on the open interest future percentage, here are the top 10 stocks - in which short-covering was seen including Hero MotoCorp, MCX India, IRCTC, Ipca Laboratories, and Hindalco Industries.

Arvind: Senior management of the company will interact with HDFC Asset Management Company.

Syngene International: Officials of the company will interact with L&T Mutual Fund, and Alchemy Capital.

Eicher Motors: Officials of the company will meet BlackRock.

Premier Explosives: The company has received order for warheads manufacturing from Israel Aerospace Industries (IAI). The order is valued at around Rs 4.27 crore and ordered items are expected to be delivered by May 2023. The company also received order worth Rs 5.47 crore for production and supply of booster rocket motors, which is expected to be delivered by March 31, 2023.

Tata Steel: The company has raised Rs 2,000 crore through NCDs issue as the board of directors has approved the allotment of 20,000 non-convertible debentures with face value Rs 10 lakh each to identified investors on private placement basis. The NCDs are proposed to be listed on the Wholesale Debt Market (WDM) segment of BSE.

Zydus Lifesciences: European Commission has granted marketing authorization for Nulibry (fosdenopterin) for injection as the first therapy for the treatment of patients with molybdenum cofactor deficiency (MoCD) Type A. MoCD Type A is an ultra-rare and progressive condition known to impact less than 150 patients globally with a median survival of four years. Nulibry was first FDA-approved therapeutic owned by Nasdaq-listed biopharmaceutical company BridgeBio Pharma, and US-based Sentynl Therapeutics Inc, owned by Zydus, acquired global rights to market Nulibry in March 2022.

Wipro: The IT services company, and UK-based Finastra announced a partnership in India to power digital transformation for corporate banks in India. This multi-year partnership makes Wipro the exclusive implementation and go-to-market partner for all banks in India for Finastra's Fusion Trade Innovation and Fusion Corporate Channels.

Lykis: Vijay Kishanlal Kedia has offloaded 3.9 lakh equity shares or 2.02% stake in the company via open market transactions. With this, his shareholding in the company reduced to 3.95%, down from 5.97% earlier.

Niyogin Fintech: Alchemy India Long Term Fund sold 20.07 lakh shares or 2.13% stake in the company via open market transactions. With this, its shareholding in the company reduced to 0.82%, down from 3.29% earlier. 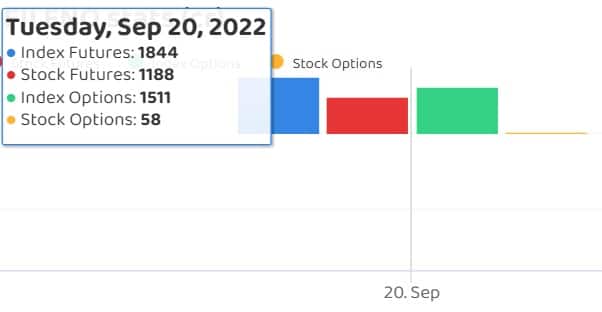 Five stocks - Delta Corp, Escorts, India Cements, PVR, and RBL Bank - are under the NSE F&O ban list for September 21. Securities banned under the F&O segment include companies where derivative contracts have crossed 95 percent of the market-wide position limit.

Disclaimer: The views and investment tips expressed by investment experts on Moneycontrol.com are their own and not those of the website or its management. Moneycontrol.com advises users to check with certified experts before taking any investment decisions.
Sunil Shankar Matkar
Tags: #Market Cues #Market Edge #Nifty #Sensex #Trade Setup
first published: Sep 20, 2022 10:05 pm