Trade Setup for Wednesday: Top 15 things to know before the Opening Bell

Shrikant Chouhan of Kotak Securities says for next few days, 10,850 will be the support level and 11,150 will act as resistance for Nifty.

Benchmark indices extended rally on September 9 but failed to recoup in complete the losses seen the week before. Banking and financials, auto and FMCG stocks pushed indices higher. The broader markets participated in the move, with the Nifty Midcap index rising more than a percent.

Experts expect the momentum to continue and feel the closing above 11,150 could spark a sharp upside.

"The short-term trend of the Nifty continues to be positive. The present upside momentum is likely to pull the market towards the crucial resistance zone of around 11,120-11,150 levels in the next few sessions," Nagaraj Shetti, Technical Research Analyst at HDFC Securities, told Moneycontrol.

He said a decisive/sustainable move only above 11,150 would bring a sharp upside movement in the market and could open up a potential pattern target on the upside. Failure to sustain the highs could result in a minor downward correction, Shetti added.

Shrikant Chouhan, Senior Vice-President (Equity Technical Research) at Kotak Securities, said for next few days, 10,850 would be the support level and 11,150 would act as resistance. Above 11,150, the Nifty would enter into a medium-term uptrend, he added.

Maximum call open interest (OI) of 20.67 lakh contracts was seen at the 11,500 strike price. It will act as a crucial resistance level in the September series.

Maximum put open interest of 33.47 lakh contracts was seen at 10,800 strike price, which will act as crucial support in the September series. 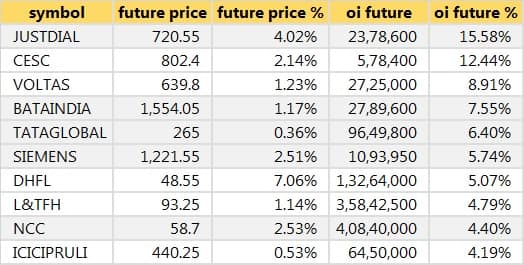 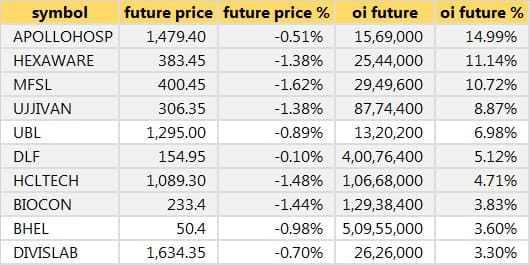 Indian Bank: The board meets on September 18 to consider and approve merger of Allahabad Bank into Indian Bank and capital infusion by the government by way of preferential issue of shares.

Ceat: Company will be participated in analyst/institutional investors meet organised by BOB Capital on September 13.

BCL Industries: A board meeting is planned for September 19 to consider and approve various matters, including invitation to deposits.

Punjab & Sind Bank: In a board meeting on September 19, capital infusion of up to Rs 800 crore by the government through preferential issue of equity shares will be taken up for approval .

Talbros Automotive Components: Company officials will meet investors and analysts on September 11 and 12.

eClerx Services: A meeting with ICICI Prudential Mutual Fund (via Equirus Capital) is planned for September 13.

Sun Pharma: Company increased stake in PJSC Biosintez Of Russia to 100 percent from 96.96 percent through purchase of shares.

Ballarpur Industries: Solutions Finquest Financial sold 78,98,761 shares of the company at 56 paise per share on the NSE via bulk deal on September 9.

For September 11, not a single stock is under F&O ban.