Based on the OI percentage, a short build-up was seen in 54 stocks on January 24, including Container Corporation of India, ONGC, Indus Towers, SBI Card, and Deepak Nitrite.

The market on January 24 lost its gains in the afternoon and finally settled the session on a flat note despite positive Asian cues, ahead of the expiry of January derivative contracts on January 25.

The BSE Sensex rose 37 points to 60,979, while the Nifty50 declined 0.2 point to 18,118.30 and formed a bearish candle on the daily charts as the closing was lower than the opening levels. The index remained rangebound for yet another session.

"A long bear candle was formed on the daily chart which indicates a continuation of rangebound movement in the market. The high-low range of around 18,200 to 18,000 levels has been acting as a high-low range over the last five sessions," Nagaraj Shetti, Technical Research Analyst at HDFC Securities said.

He says that the short-term trend of Nifty continues to be rangebound and this choppy movement within 18,200-18,000 levels is likely to continue for the next 1-2 sessions.

The market is waiting for cues around the upcoming Union Budget 2023, which is scheduled for February 1, Shetti said.

The broader markets saw moderate selling pressure with the Nifty Midcap 100 and Smallcap 100 indices falling 0.4 percent each on weak breadth.

The Nifty Bank fell 88 points to close at 42,733 and formed a bearish candlestick pattern on the daily charts after the rangebound session.

On a monthly basis, we have seen the maximum Call open interest (OI) at 18,100 strike, with 1.336 crore contracts, which can be crucial level on the monthly F&O expiry day.

On the monthly basis, the maximum Put OI was seen at 18,000 strike, with 1.028 crore contracts, which can be a crucial support level for the monthly F&O expiry day.

A high delivery percentage suggests that investors are showing interest in these stocks. We have seen the highest delivery in HDFC, ONGC, Kotak Mahindra Bank, ITC, and Sun Pharmaceutical Industries, among others. 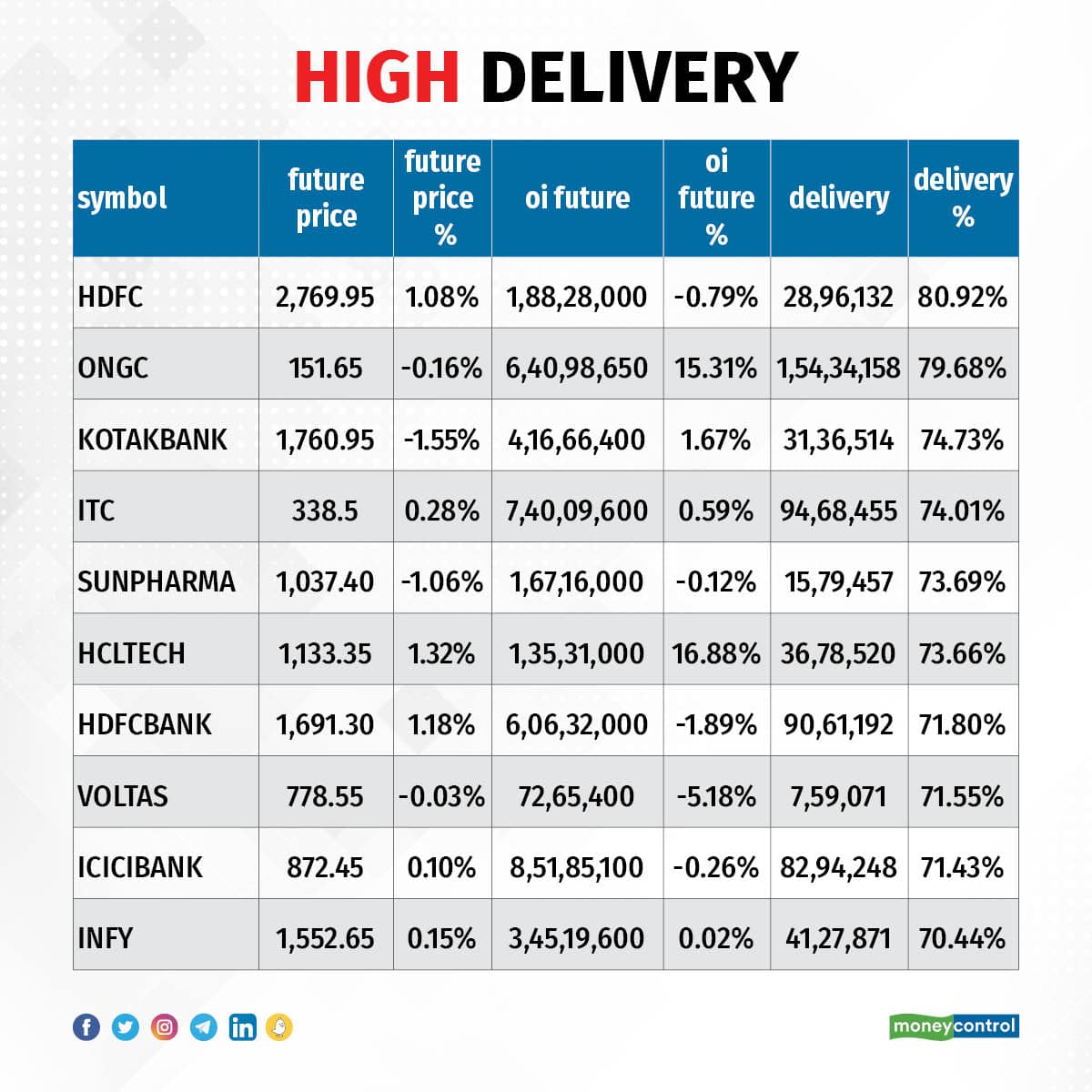 An increase in OI, along with an increase in price, mostly indicates a build-up of long positions. Based on the OI percentage, we have seen a long build-up in 20 stocks on Tuesday, including Bajaj Auto, HCL Technologies, Britannia Industries, Maruti Suzuki, and Atul. 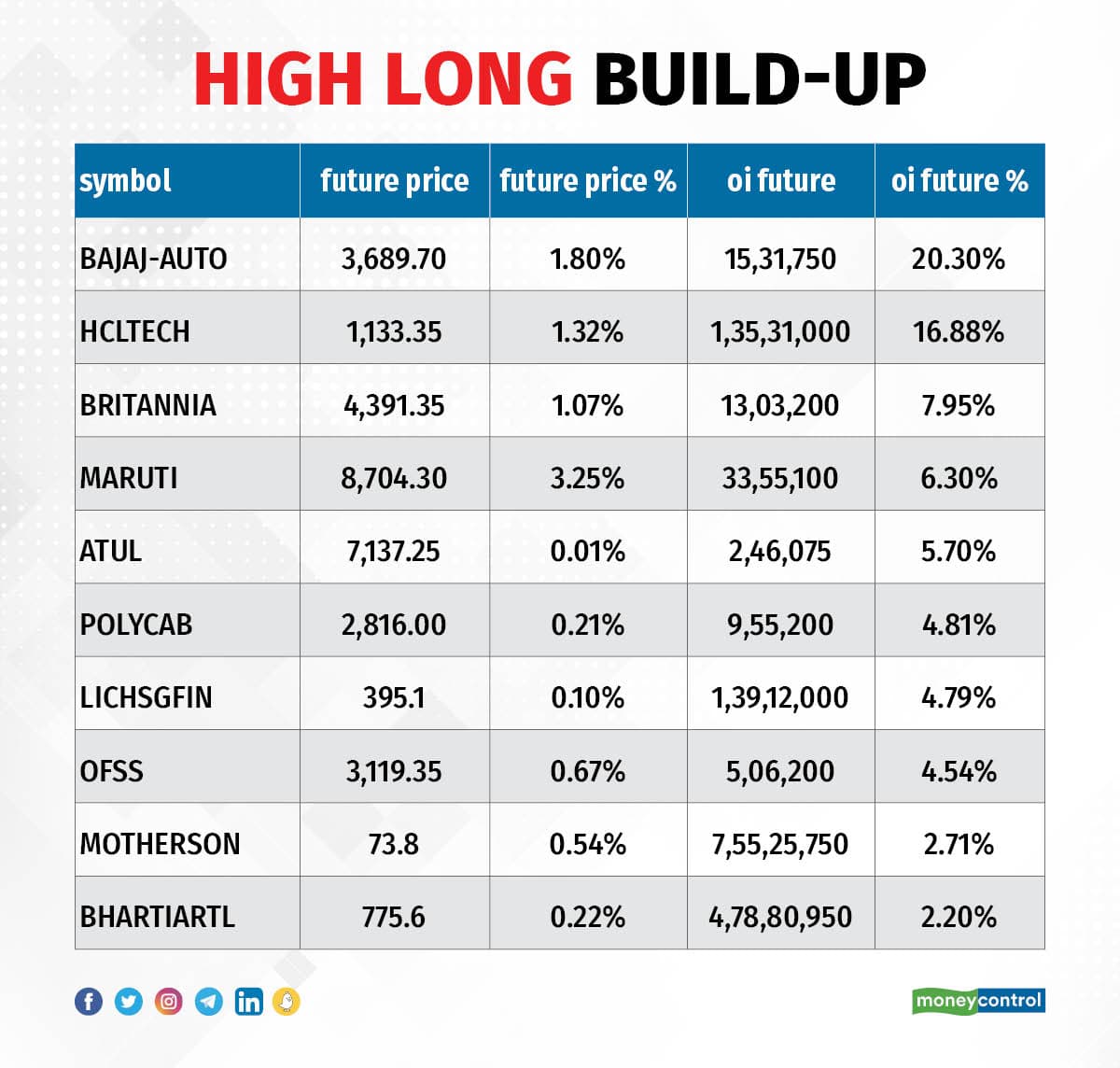 A decline in OI, along with a decrease in price, mostly indicates long unwinding. Based on the OI percentage, 82 stocks saw long unwinding on Tuesday, including L&T Finance Holdings, JK Cement, Gujarat Gas, Coal India, and Cummins India. An increase in OI, along with a decrease in price, mostly indicates a build-up of short positions. Based on the OI percentage, we have seen a short build-up in 54 stocks on Tuesday, including Container Corporation of India, ONGC, Indus Towers, SBI Card, and Deepak Nitrite. A decrease in OI, along with an increase in price, mostly indicates a short-covering. Based on the OI percentage, we have 35 stocks on the short-covering list on Tuesday, including Delta Corp, PVR, IndiaMART InterMESH, L&T Technology Services, and Max Financial Services. Triveni Engineering Industries: The company said the board members have approved further capex of Rs 90 crore for the sugar business group and Rs 100 crore capex for power transmission operations. In addition, the company has reported a 13 percent year-on-year growth in consolidated profit at Rs 147.3 crore for the quarter ended December FY23, led by lower tax cost and higher other income. Revenue grew by 34 percent to Rs 1,659 crore compared to the year-ago period, but operating profit fell 4.6 percent YoY to Rs 193.4 crore for the quarter.

Pidilite Industries: The adhesives, sealants and construction chemicals manufacturer has reported a 14.3 percent year-on-year decline in consolidated profit at Rs 307.7 crore for quarter ended December FY23, impacted by a lower operating margin. Revenue grew by 5.2 percent to Rs 2,998 crore compared to the year-ago period with C&B business growing at 7 percent. In Q3FY22, it registered robust growth as a result of trade increasing inventory stocking because of substantial price increases in the quarter. Overall numbers missed analysts' expectations.

TVS Motor Company: The two-and-three-wheeler manufacturer has clocked a 22 percent year-on-year growth in standalone profit at Rs 352.8 crore for December FY23 quarter despite higher input costs. Revenue from operations grew by 14.7 percent to Rs 6,545 crore compared to the year-ago period, with volume rising 0.09 percent to 8.79 lakh YoY. Operating profit at Rs 659 crore increased by 16 percent with a margin expansion of 10 bps at 10.1 percent compared to the same period last year. The board members have declared an interim dividend of Rs 5 per share.

Nazara Technologies: The gaming and sports media platform has clocked a 76 percent year-on-year growth in consolidated profit at Rs 18.1 crore for the quarter ended December FY23 despite the weak operating performance, led by topline and other income. Revenue from operations at Rs 315 crore grew by 69.4 percent compared to the year-ago period. Operating profit increased by 3.4 percent YoY to Rs 30.1 crore and margin fell 6 percentage points YoY to 9.6 percent for the quarter.

Macrotech Developers: The real estate developer has registered a 41.7 percent year-on-year growth in consolidated profit at Rs 404.5 crore despite lower revenue and weak operating performance, supported by other income and lower tax costs. Revenue for the quarter at Rs 1,774 crore declined 14 percent, but pre-sales grew by 16 percent YoY to Rs 3,035 crore compared to the year-ago period. The company reduced net debt by Rs 753 crore to Rs 8,042 crore.

Indus Towers: The mobile tower installation company has posted a consolidated loss of Rs 708.2 crore for the quarter ended December FY23 against a profit of Rs 1,570.8 crore in the same period last fiscal, as the company made doubtful debt provision of Rs 2,298 crore against receivables from one of the telecom companies. Revenue fell 2.3 percent YoY to Rs 6,765 crore for the quarter, and EBITDA tanked 68 percent to Rs 1,185.8 crore compared to the year-ago period.

The National Stock Exchange has added any stock under its F&O ban list for January 25, the expiry day for monthly futures & options contracts. Securities thus banned under the F&O segment include companies where derivative contracts have crossed 95 percent of the market-wide position limit.