The market corrected a third of a percent amid consolidation and a rangebound session on December 6, as traders looked cautious ahead of the Reserve Bank of India Monetary Policy Committee's interest rate decision on December 7. Weak global cues also weighed on market sentiment.

The BSE Sensex declined 208 points to 62,626, while the Nifty50 fell 58 points to 18,643 and formed a bullish candle on the daily charts as the closing was higher than the opening levels.

"On the daily charts, the Nifty formed a small body bullish candle indicating shrunken volatility. The momentum indicator RSI (relative strength index) is moving down. However, it is sustaining above 60 levels which reflects the presence of positive momentum in the prices," Vidnyan Sawant, AVP - Technical Research at GEPL Capital said.

As per the overall price structure and evidence provided by indicators, the market expert feels that the Nifty will stay in the range between 18,886 and 18,365 levels.

The broader markets also corrected on Tuesday, with the Nifty Midcap 100 and Smallcap 100 indices falling 0.46 percent and 0.16 percent respectively. 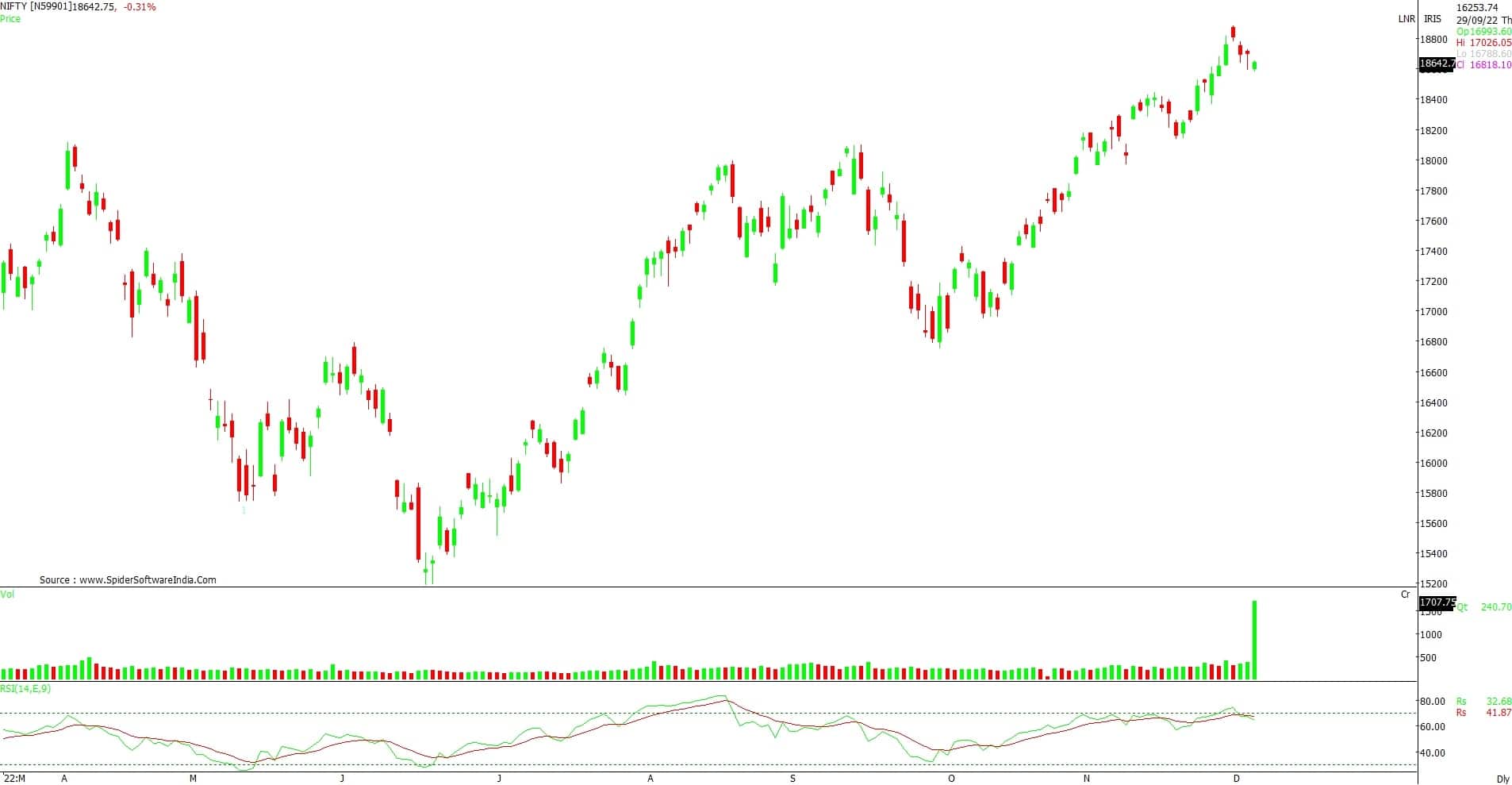 We have seen the maximum Call open interest at 19,000 strike, with 35.18 lakh contracts, which can act as a crucial resistance level in the December series.

We have seen a maximum Put open interest at 18,000 strike, with 32.04 lakh contracts which can act as a crucial support level in the December series.

A high delivery percentage suggests that investors are showing interest in these stocks. We have seen the highest delivery in ICICI Bank, HDFC Bank, Trent, ICICI Lombard General Insurance, and Dr Lal PathLabs, among others. An increase in open interest, along with an increase in price, mostly indicates a build-up of long positions. Based on the open interest future percentage, we have seen a long build-up in 27 stocks on Tuesday, including Punjab National Bank, SBI Life Insurance, Piramal Enterprises, Hindustan Unilever, and UltraTech Cement. A decline in open interest, along with a decrease in price, mostly indicates a long unwinding. Based on the open interest future percentage, 66 stocks have seen long unwinding on Tuesday including Nifty Financial, Bank Nifty, Hindalco Industries, HCL Technologies, and Federal Bank. An increase in open interest, along with a decrease in price, mostly indicates a build-up of short positions. Based on the open interest future percentage, we have seen a short build-up in 62 stocks on Tuesday including IRCTC, Colgate Palmolive, Dr Reddy's Laboratories, Tata Chemicals, and Crompton Greaves Consumer Electrical. 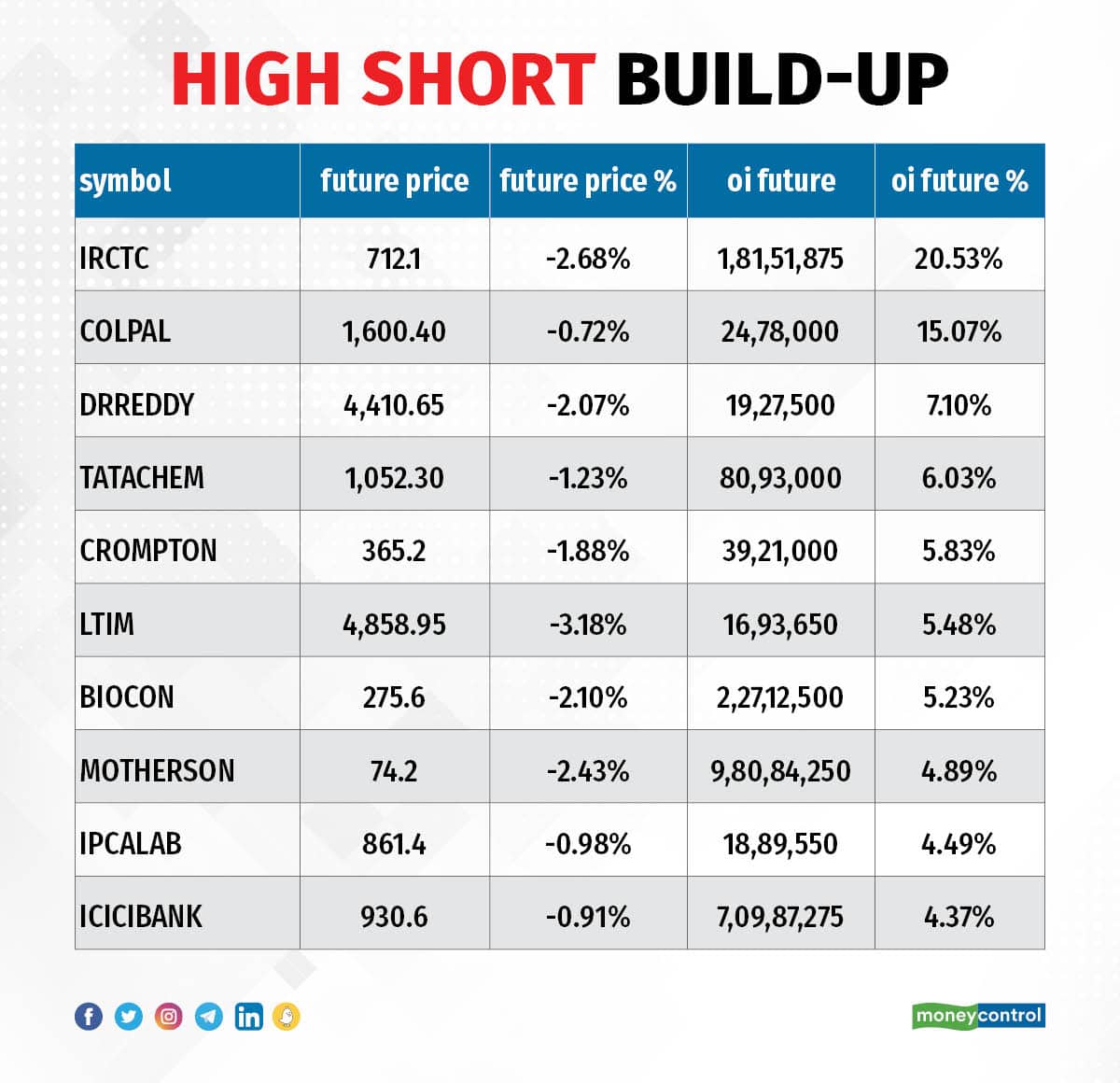 A decrease in open interest, along with an increase in price, mostly indicates a short-covering. Based on the open interest future percentage, we have 37 stocks on the short-covering list on Tuesday including Bosch, Indraprastha Gas, Coal India, Abbott India, and AU Small Finance Bank. Veritas (India): Swan Energy bought additional 6.6 lakh shares (2.46 percent) in the company at an average price of Rs 152.15 per share. However, promoter Niti Nitinkumar Didwania was the seller in this deal. With this, Swan Energy's stake in the company increased to 36.4 percent, up from 33.93 percent earlier. Clean Science and Technology: Officials of the company will interact with Sundaram Mutual Fund.

Tata Motors: Officials of the company will interact with Capital Global.

Hindustan Zinc: Officials of the company will interact with prospective investors via non-deal road shows, for disinvestment of residual government's shareholding in the company.

Allcargo Logistics: Officials of the company will attend the Sell side group meeting.

DCM Shriram: Officials of the company will interact with Arihant Capital.

Syngene International: Officials of the company will interact with Newport Asia LLC.

Tata Steel: Officials of the company will interact with BlackRock Investment Management.

Sundram Fasteners: Officials of the company will interact with ICICI Prudential Life.

UltraTech Cement: Officials of the company will interact with Oaktree Capital Management.

Bikaji Foods International: The ethnic snacks company has reported a 43.5 percent year-on-year growth in consolidated profit after tax of Rs 40.92 crore led by operating performance and top line. Revenue for the quarter grew by 32 percent to Rs 577 crore compared to the year-ago period as it has witnessed a good double-digit growth in all categories YoY. EBITDA margin expanded to 11.1 percent, from 10.4 percent in same period.

Siemens: The company has emerged as the lowest bidder (L1) for the 9000 HP electric locomotives project in Dahod, Gujarat. Hence, the trading window under the company’s code of conduct for the prohibition of insider trading will remain closed till December 8.

Ircon International: The company has received an order for signalling and telecommunication system from Sri Lanka Railways. The order worth Rs 122 crore is under the Indian line of credit.

Ugro Capital: The company said its board will meet on December 9 to consider raising funds via the issuance of market-linked non-convertible debentures on a private placement basis.

The National Stock Exchange has added Punjab National Bank, and retained GNFC, and Indiabulls Housing Finance, under its F&O ban list for December 7. Securities thus banned under the F&O segment include companies where derivative contracts have crossed 95 percent of the market-wide position limit.