Based on the open interest future percentage, there were 69 stocks in which a short-covering was seen, including Gujarat Gas, Manappuram Finance, Deepak Nitrite, Crompton Greaves Consumer Electrical, and Dr Reddy's Laboratories

The market on November 15 saw renewed buying interest after a day of correction and consolidation, and moved further closer to its record high which is around 200 points away from current levels on the Nifty50, tracking positive trend in Asian counterparts.

The BSE Sensex gained nearly 250 points to end at a record closing high of 61,873, while the Nifty50 climbed 74 points to 18,403 and formed a bullish candle on the daily charts.

But the broader markets remained lacklustre with the Nifty Midcap 100 index up 0.01 percent and Smallcap 100 index rising 0.26 percent due to negative breadth. About 1,049 shares declined against 943 advancing shares on the NSE.

"The momentum indicator RSI (relative strength index) is sustaining above 65 mark and moving higher, which tells that the strong positive momentum is for the short to medium term," Vidnyan Sawant, AVP - Technical Research at GEPL Capital said.

As per the overall price structure and evidence supported by indicators, he feels that the Nifty will remain in a positive trend and move towards the level of 18,500 followed by the 18,650 mark. However, the bullish view will be negated if it breaches below 18,282 level, the market expert said. 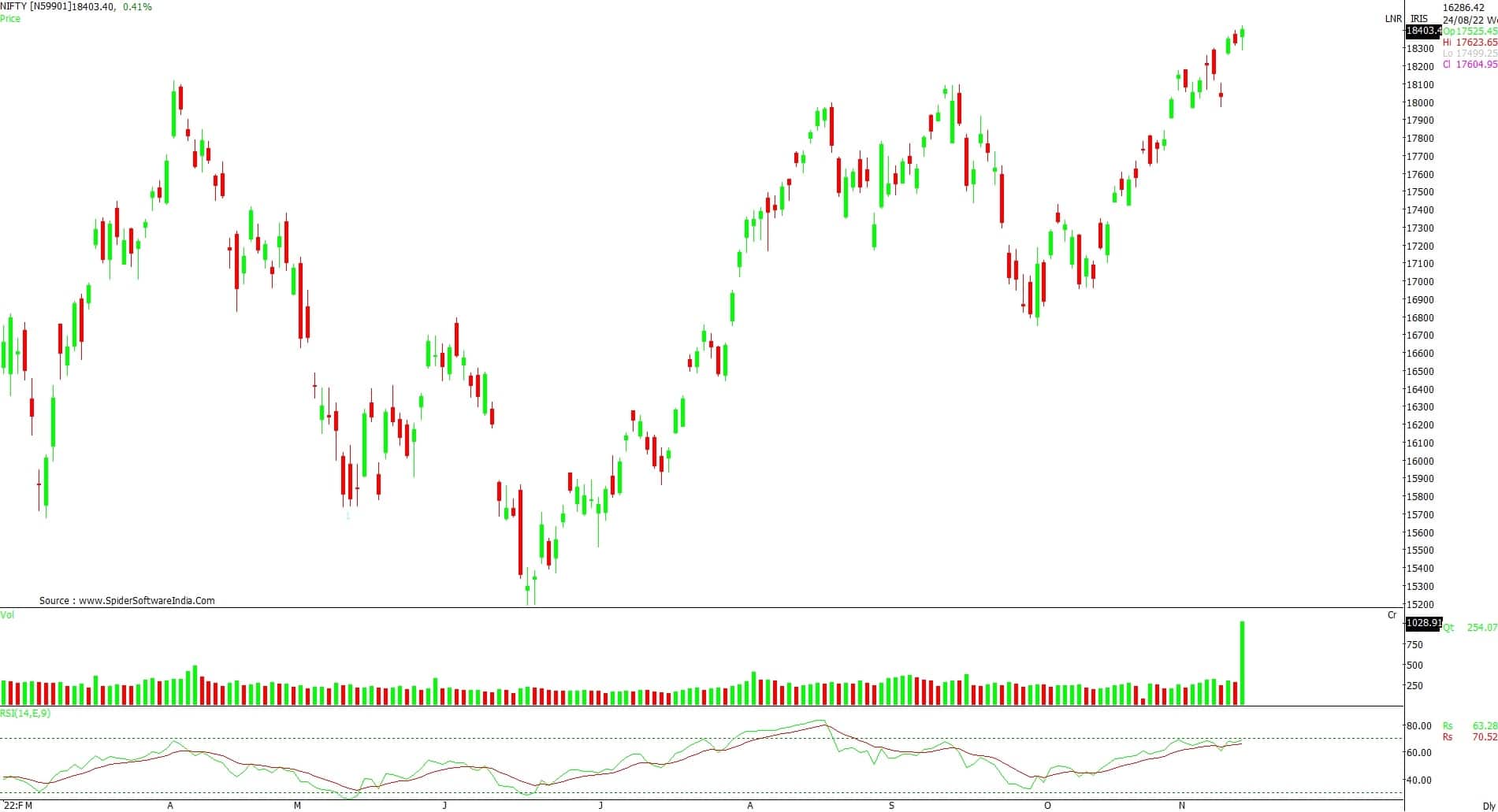 The maximum Call open interest of 33.49 lakh contracts was seen at 19,000 strike, which can act as a crucial resistance level in the November series.

Maximum Put open interest of 34.52 lakh contracts was seen at 18,000 strike, which can act as a crucial support level in the November series.

A high delivery percentage suggests that investors are showing interest in these stocks. We have seen the highest delivery in Infosys, HDFC, IDFC, Hindustan Unilever and Voltas, among others. An increase in open interest, along with an increase in price, mostly indicates a build-up of long positions. Based on the open interest future percentage, here are the top 10 stocks including Delta Corp, Indraprastha Gas, Gujarat State Petronet, Bank Nifty, and Cummins India, in which a long build-up was seen. 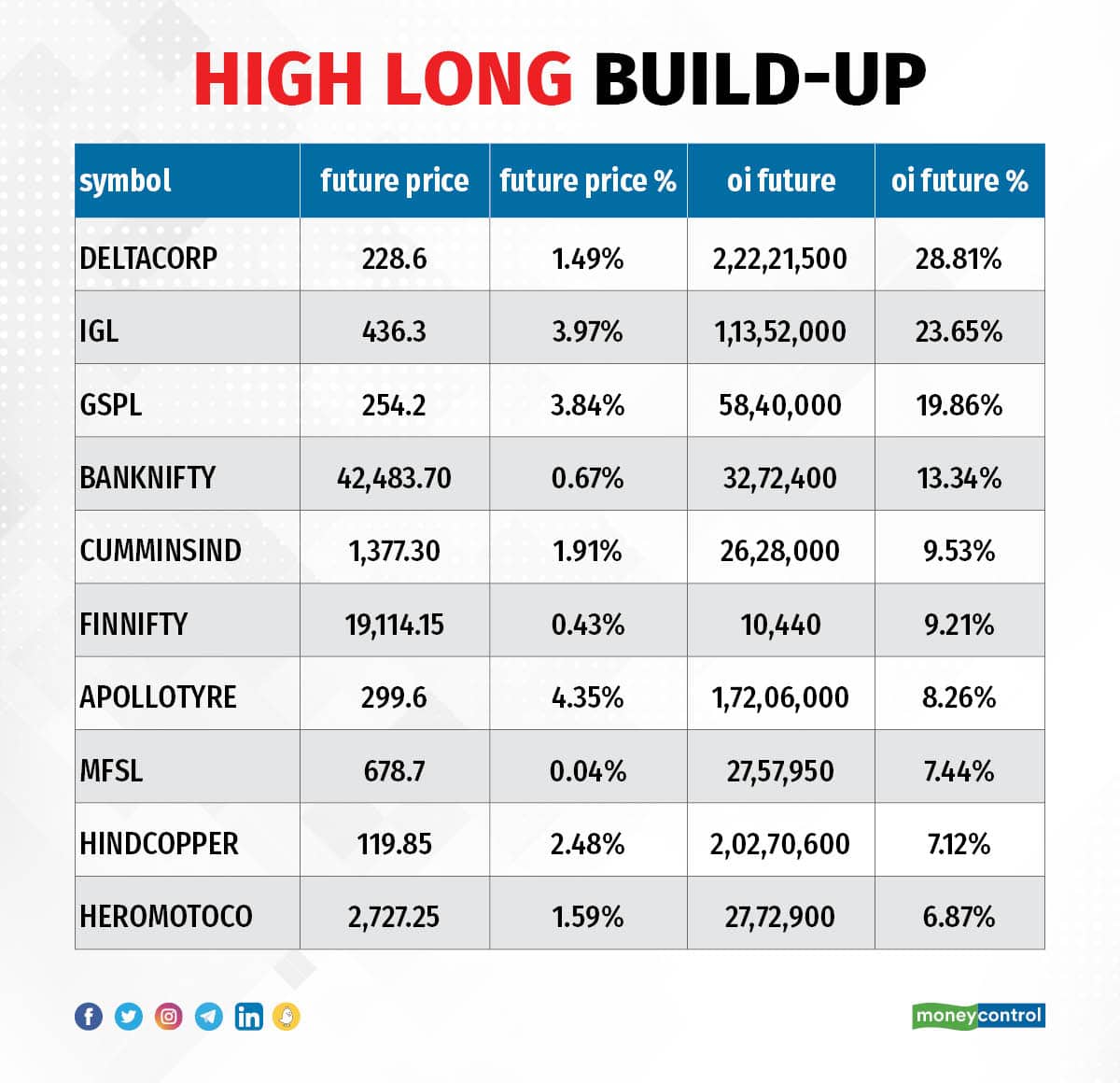 A decline in open interest, along with a decrease in price, mostly indicates a long unwinding. Based on the open interest future percentage, here are the top 10 stocks including Sun TV Network, United Breweries, Info Edge India, BHEL, and Abbott India, in which a long unwinding was seen. 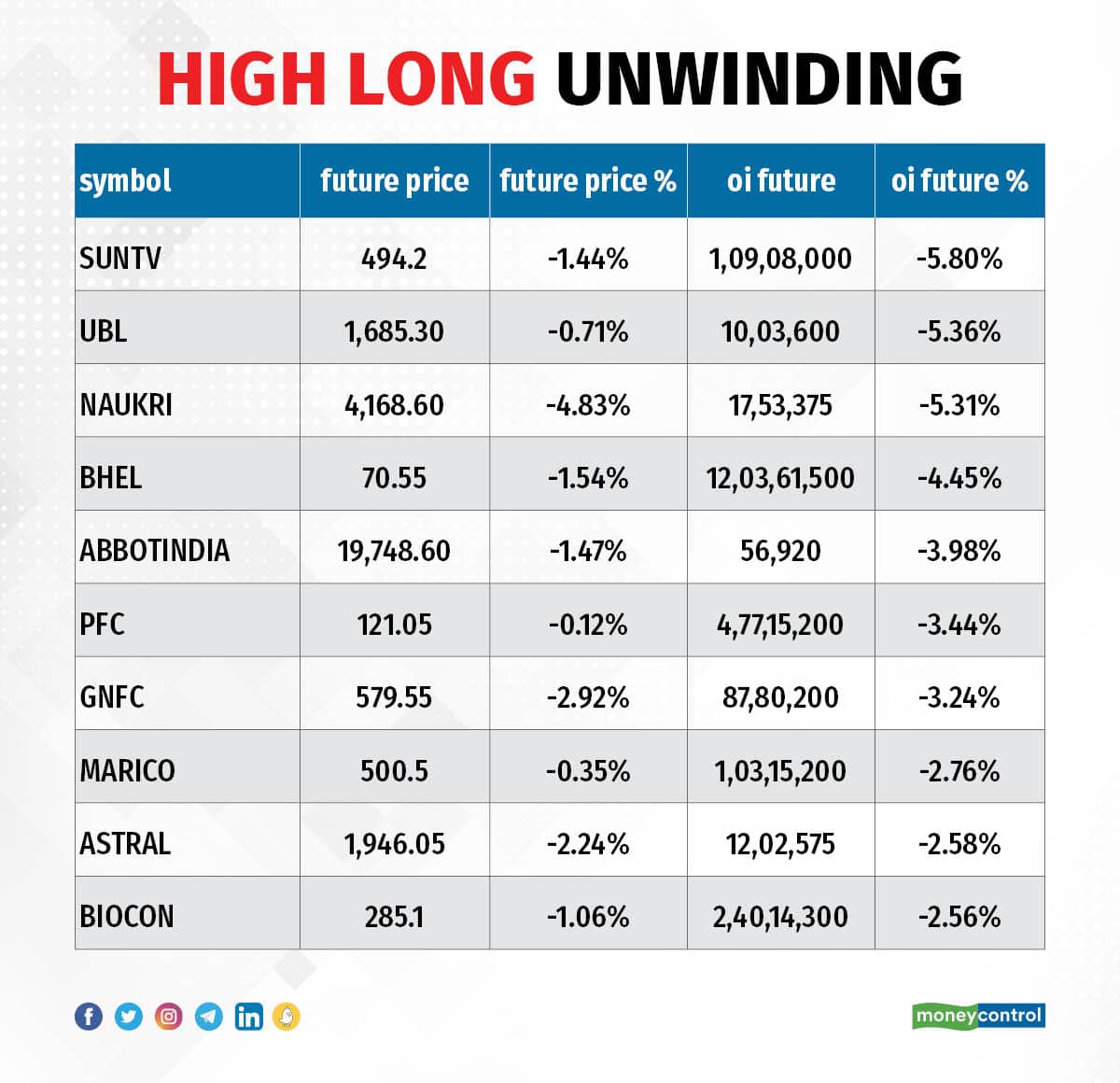 An increase in open interest, along with a decrease in price, mostly indicates a build-up of short positions. Based on the open interest future percentage, here are the top 10 stocks in which a short build-up was seen, including Polycab India, NMDC, IRCTC, Bata India and L&T Infotech. A decrease in open interest, along with an increase in price, mostly indicates a short-covering. Based on the open interest future percentage, here are the top 10 stocks, in which short-covering was seen, including Gujarat Gas, Manappuram Finance, Deepak Nitrite, Crompton Greaves Consumer Electrical, and Dr Reddy's Laboratories. 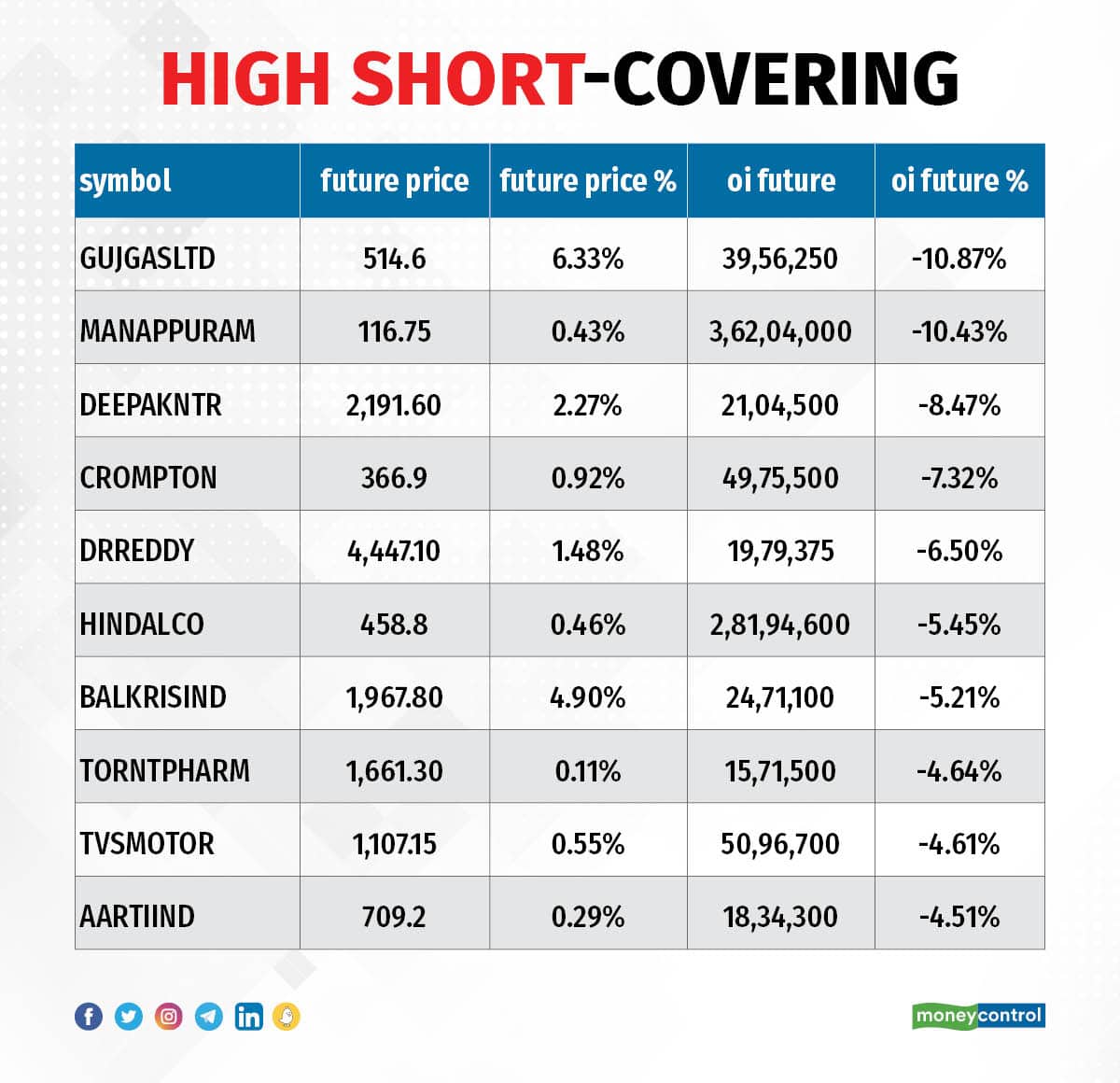 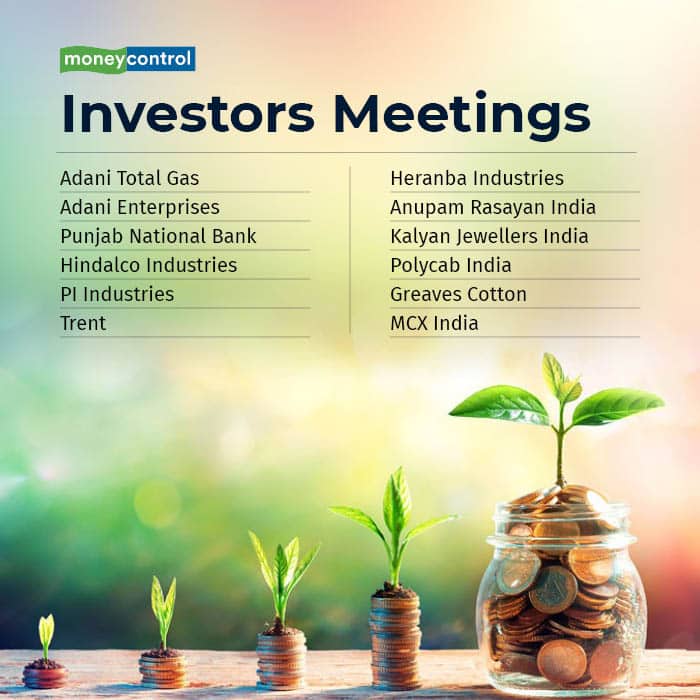 Adani Enterprises: Officials of the company will have an interaction at Morgan Stanley Equity Conference, Singapore.

Punjab National Bank: Officials of the bank will have a virtual interaction with Kotak Institutional Equities.

PI Industries: Officials of the company will interact with Rondure Global Advisors.

Trent: Officials of the company will interact with Centrum Broking.

MCX India: Officials of the company will meet Schroders IM.

Bikaji Foods International: The country's third largest ethnic snacks company will make its grand debut on the bourses on November 16. The issue price has been fixed at Rs 300 per share.

Global Health: The operator of hospitals chain Medanta will also list its equity shares on the BSE and NSE on November 16. The final issue price is Rs 336 per share.

Tata Consultancy Services: TAP Air Portugal, the flag carrier airline of Portugal, selected TCS as a strategic partner, to accelerate its digital transformation and drive innovation. The company will establish an Airline Digital Center in Portugal, staffed with consultants with deep domain knowledge of the airline industry, solution architects and technology experts.