Indian equity benchmarks Sensex and Nifty logged in gains for the fourth consecutive session on June 23.

Indian share markets started the day on a muted note only to pick up momentum in the second half, bringing the benchmark indices within touching distance of a four-month high.

"The sharp rally over the last few days has made Nifty valuations expensive at 22 times P/E. While the near-term momentum may continue, we would advise investors to stay cautious. Investors can look for buying opportunities on declines in the market and focus more on stock-specific action," said Siddhartha Khemka, Head - Retail Research, Motilal Oswal Financial Services.

Maximum call OI of 36.16 lakh contracts was seen at 10,500 strike, which will act as crucial resistance in the June series.

Maximum put OI of 26.41 lakh contracts was seen at 10,000 strike, which will act as crucial support in the June series.

An increase in OI, along with a decrease in price, mostly indicates a build-up of short positions. 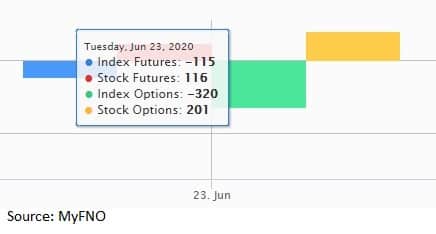 Stock under F&O ban on NSEThree stocks - Century Textiles & Industries, Just Dial and Vodafone Idea - are under the F&O ban for June 24. Securities in the ban period under the F&O segment include companies in which the security has crossed 95 percent of the market-wide position limit.