"The short-term trend of Nifty continues to be negative and one may expect some more weakness in the coming sessions," said Nagaraj Shetti, Technical Research Analyst at HDFC Securities.

Experts expect the correction along with consolidation, which was warranted after stellar run-up, to continue in coming sessions.

"The short-term trend of Nifty continues to be negative and one may expect some more weakness in the coming sessions. The formation of small negative candle with range movement on January 21 (immediately after the negative reversal of last session) could raise some hopes for bulls to show upside bounce from the lows," Nagaraj Shetti, Technical Research Analyst at HDFC Securities, told Moneycontrol.

He said key lower support area to be watched around is 12,040, where one may expect upside bounce in the market.

All sectoral indices, barring pharma, closed in the red.

"We reiterate our cautious view on the Indian markets given the stretched valuation and muted start to the earnings season. Going forward, the IMF growth forecast cut to 4.8 percent is likely to raise hopes amongst market participants of a big bang budget. Further, the earnings announcement for corporates would also induce stock specific volatility," said Ajit Mishra, VP - Research at Religare Broking.

Maximum Call open interest (OI) of 34.54 lakh contracts was seen at the 12,500 strike price. It will act as a crucial resistance level in the January series.

Maximum Put open interest of 34.35 lakh contracts was seen at 12,000 strike price, which will act as crucial support in the January series.

A decrease in open interest, along with an increase in price, mostly indicates a short covering. Here are top 10 stocks that witnessed short-covering on January 8. 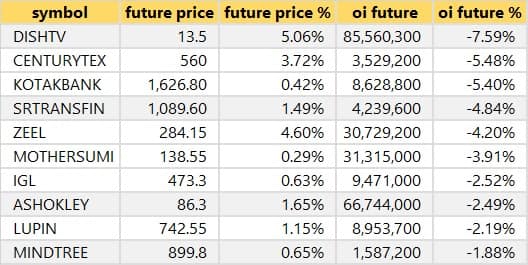 Pokarna: Board meeting is scheduled on January 29 to announce October-December quarter earnings.

Force Motors: Board meeting is scheduled on January 30 to announce October-December quarter earnings.

HPCL: Board meeting is scheduled on February 5 to announce October-December quarter earnings.

Time Technoplast: Board meeting is scheduled on February 13 to announce October-December quarter earnings.

Redington (India): Board meeting is scheduled on February 6 to announce October-December quarter earnings.

NHPC: Board meeting is scheduled on February 7 to announce October-December quarter earnings.

OnMobile Global: Branch of the company in United Kingdom has been dissolved.

Indian Card Clothing Company: Pimpri plant in Pune suddenly caught fire on January 20, 2020, which has been non-operational since last year.

Allahabad Bank: Board meeting is scheduled on January 24 to consider a proposal for raising equity capital of the bank by an amount aggregating upto Rs 2,153 crore through preferential allotment to the Government of India.

Yes Bank is under the F&O ban for January 22. Securities in the ban period under the F&O segment include companies in which the security has crossed 95 percent of the market-wide position limit.