The market benchmarks corrected on December 10 as investors took money off the table in the light of lacklustre global cues.

Sensex and Nifty ended with losses of about 0.7 percent each, with IT, FMCG, metal and PSU banks falling the most.

"After a brief respite yesterday, the bears were back in charge as the Indian indices ended the session with losses. This was mainly due to negative global cues and rising domestic concerns on whether the government will be able to maintain its fiscal deficit target due to lower tax collections," said Ajit Mishra, VP - Research, Religare Broking.

"We continue to maintain our cautious stance on the Indian markets due to stretched valuations. Going forward, trade developments between US-China, Fed rate decision and election in the UK (Thursday) would dictate the trend for markets, including India. On the domestic front, given the slower growth and higher inflation in the last month, the market participants would keep a close watch on CPI, IIP and WPI data scheduled this week," Mishra said.

Maximum call open interest (OI) of 27.74 lakh contracts was seen at the 12,000 strike price. It will act as a crucial resistance level in the December series.

Maximum put open interest of 32.31 lakh contracts was seen at 11,500 strike price, which will act as crucial support in the December series.

The respective boards of Alfred Herbert (India), Enbee Trade and Finance, Finkurve Financial Services and Ventura Guaranty will meet on December 11 to consider and approve their quarterly results.

The board of Almondz Global Securities will meet on December 11 to consider and approve quarterly results and the merger of one of its wholly-owned subsidiary.

The board of RSWM will meet on December 11 to consider the right issue of equity shares.

Yes Bank: The board is willing to favourably consider the offer of $500 million of Citax Holdings and Citax Investment Group. The binding offer of $1.2 billion submitted by Erwin Singh Braich / SPGP Holdings continues to be under discussion.

GHCL: India Ratings & Research has affirmed "IND A1+" to GHCL for issuance of commercial paper.

IDBI Bank: Board approved the sale of up to 49 percent stake in subsidiaries IDBI Capital and IDBI Intech. 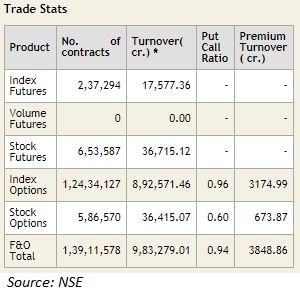 There is no stock under the F&O ban for December 11. Securities in the ban period under the F&O segment include companies in which the security has crossed 95 percent of the market-wide position limit.Get access to India's fastest growing financial subscriptions service Moneycontrol Pro for as little as Rs 599 for first year. Use the code "GETPRO". Moneycontrol Pro offers you all the information you need for wealth creation including actionable investment ideas, independent research and insights & analysis For more information, check out the Moneycontrol website or mobile app.