The market gained momentum after rangebound trade in the last few sessions to close higher for the second straight day on July 16 driven by banking & financials, auto, healthcare and energy stocks.

"A long bull candle was formed, that has closed just above the key overhead resistance of 11,650 levels (resistance as per the concept of change in polarity). The Nifty needs to sustain and move decisively above this resistance area in the short term to consider further strength in an upside bounce," Nagaraj Shetti, Technical Research Analyst at HDFC Securities told Moneycontrol.

According to him, if the Nifty fails to sustain above 11,650 level in the next couple of sessions, then one can expect a sharp fall from the highs.

Rohit Singre, Senior Technical Analyst at LKP Securities also said the index managed to close above a strong hurdle of 11,650-zone suggesting some short-covering move towards 11,710-11,755.

Maximum Call open interest (OI) of 32.24 lakh contracts was seen at the 12,000 strike price. It will act as a crucial resistance level for the July series.

Maximum Put open interest of 23.56 lakh contracts was seen at 11,300 strike price. It will act as a crucial support level for the July series. Ceat: Company will announce its June quarter earnings on August 1.

BHEL: A contract to construct a raw material handling system at NMDC's under construction integrated steel plant, Nagarnar, Chhattisgarh is being executed by BHEL-ISG Bengaluru division. The company received a notice of termination from NMDC for this contract. BHEL proposes to take up the matter through the redressal mechanism available for disputes resolution between CPSEs.

Astron Paper & Board Mill: Unit-1 in Halvad, Gujarat) will be shut during July 16-20 for scheduled preventive maintenance of boiler/power plant.

Suzlon Energy: Company has not paid the principal of $172 million due on bonds. It is working on a holistic solution on debt obligations and in talks with stakeholders. 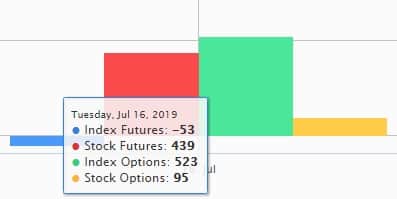 For July 17, DHFL, Reliance Capital and Reliance Infrastructure are under the F&O ban period.

Out of F&O Ban: IDBI Bank