Based on the open interest future percentage, there were 57 stocks including India Cements, Nifty Financial, Astral, Lupin, and Bajaj Auto in which a short-covering was seen

The market rebounded with half a percent gains on September 19, after losing 3 percent in the previous three trading sessions, as traders await the Federal Reserve's interest rate decision which is due in the middle of this week.

The BSE Sensex rallied 300 points to 59,141, while the Nifty50 climbed 92 points to 17,622 and formed a decent bullish candlestick pattern on the daily charts.

"A small positive candle was formed on the daily chart with a minor lower shadow. Technically, this pattern indicates a minor upside bounce in the market," Nagaraj Shetti, Technical Research Analyst at HDFC Securities said.

The Nifty is currently placed within a broader range of 18,000-17,500 levels and it was seen showing a minor upside bounce from the lower range. Hence, any sustainable upside bounce from here could encounter hurdles around 17,750, 17,860 and 18,050 levels.

Monday's upside bounce could be a cheering factor for the bulls to make a comeback. Further sustainable upmove from here could pull the Nifty towards the 18,000 mark again, he said, adding that any weakness below the support of 17,450 levels could open the next downside towards the 17,100-17,000 levels in the near term.

But there was underperformance in the broader space as the Nifty Midcap 100 index closed flat and the Nifty Smallcap 100 index declined nearly 1 percent.

Maximum Call open interest of 29.01 lakh contracts was seen at 18,000 strike, which will act as a crucial resistance level in the September series.

Maximum Put open interest of 34.39 lakh contracts was seen at 16,500 strike, which will act as a crucial support level in the September series.

A high delivery percentage suggests that investors are showing interest in these stocks. The highest delivery was seen in Larsen & Toubro, Power Grid Corporation of India, ITC, Godrej Consumer Products, and Bharti Airtel, among others. 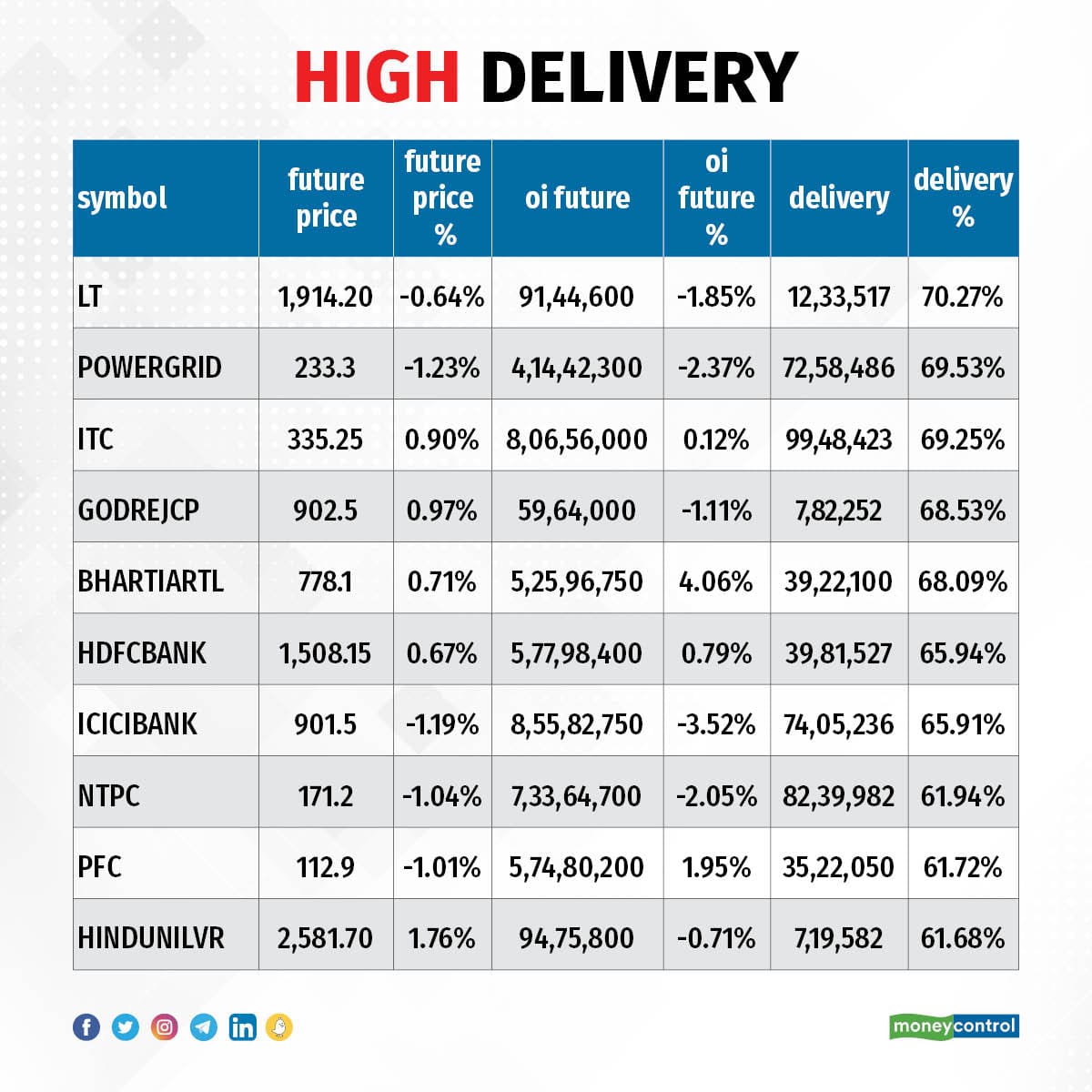 An increase in open interest, along with an increase in price, mostly indicates a build-up of long positions. Based on the open interest future percentage, here are the top 10 stocks in which a long build-up was seen including Escorts, TVS Motor Company, ACC, Bharti Airtel, and Mahanagar Gas. 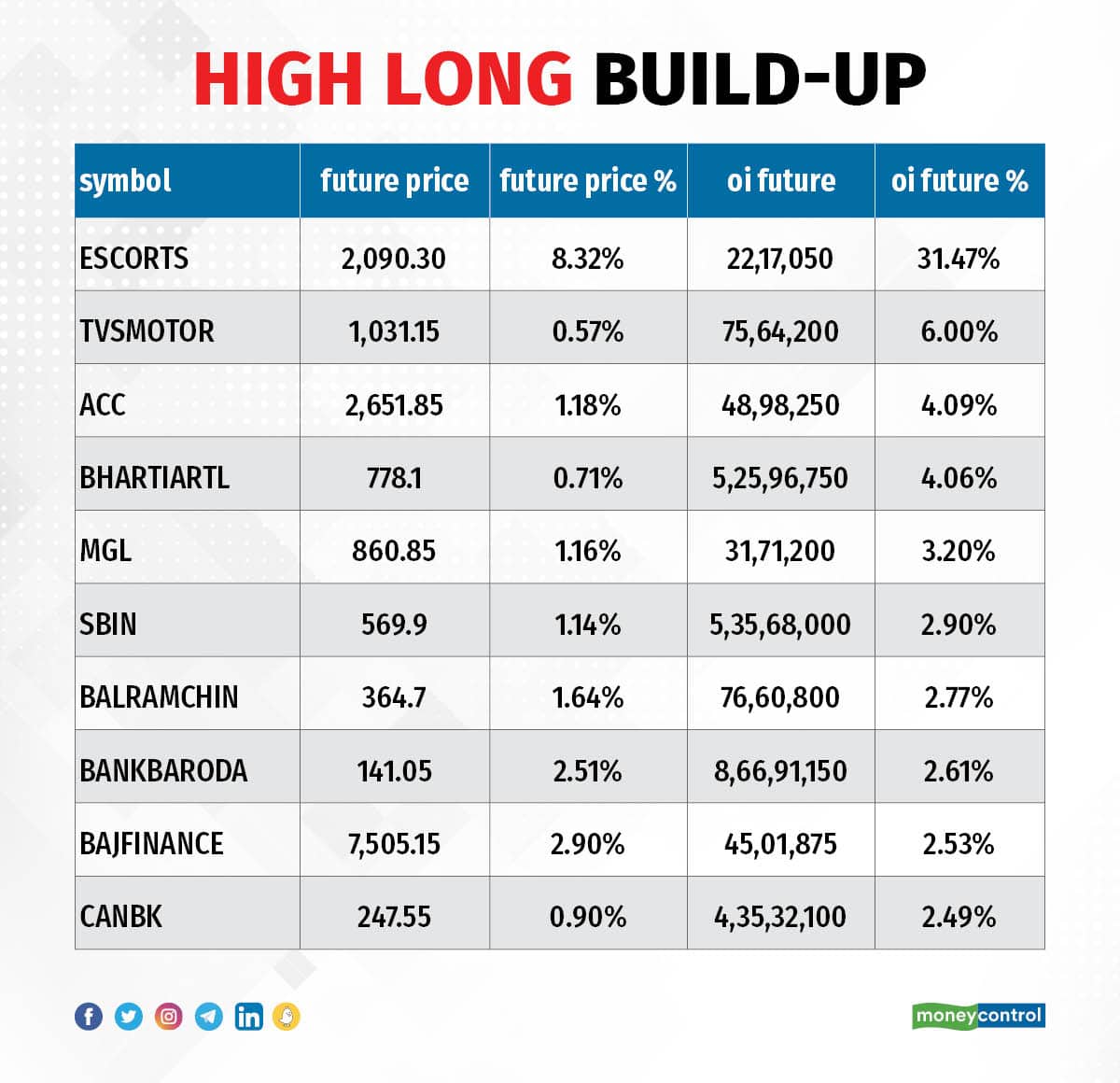 A decline in open interest, along with a decrease in price, mostly indicates a long unwinding. Based on the open interest future percentage, here are the top 10 stocks including Birlasoft, Polycab India, ICICI Bank, Tata Consumer Products, and Gujarat State Petronet, in which long unwinding was seen. An increase in open interest, along with a decrease in price, mostly indicates a build-up of short positions. Based on the open interest future percentage, the top 10 stocks in which a short build-up was seen include Can Fin Homes, Muthoot Finance, Gujarat Gas, L&T Technology Services, and M&M Financial Services. 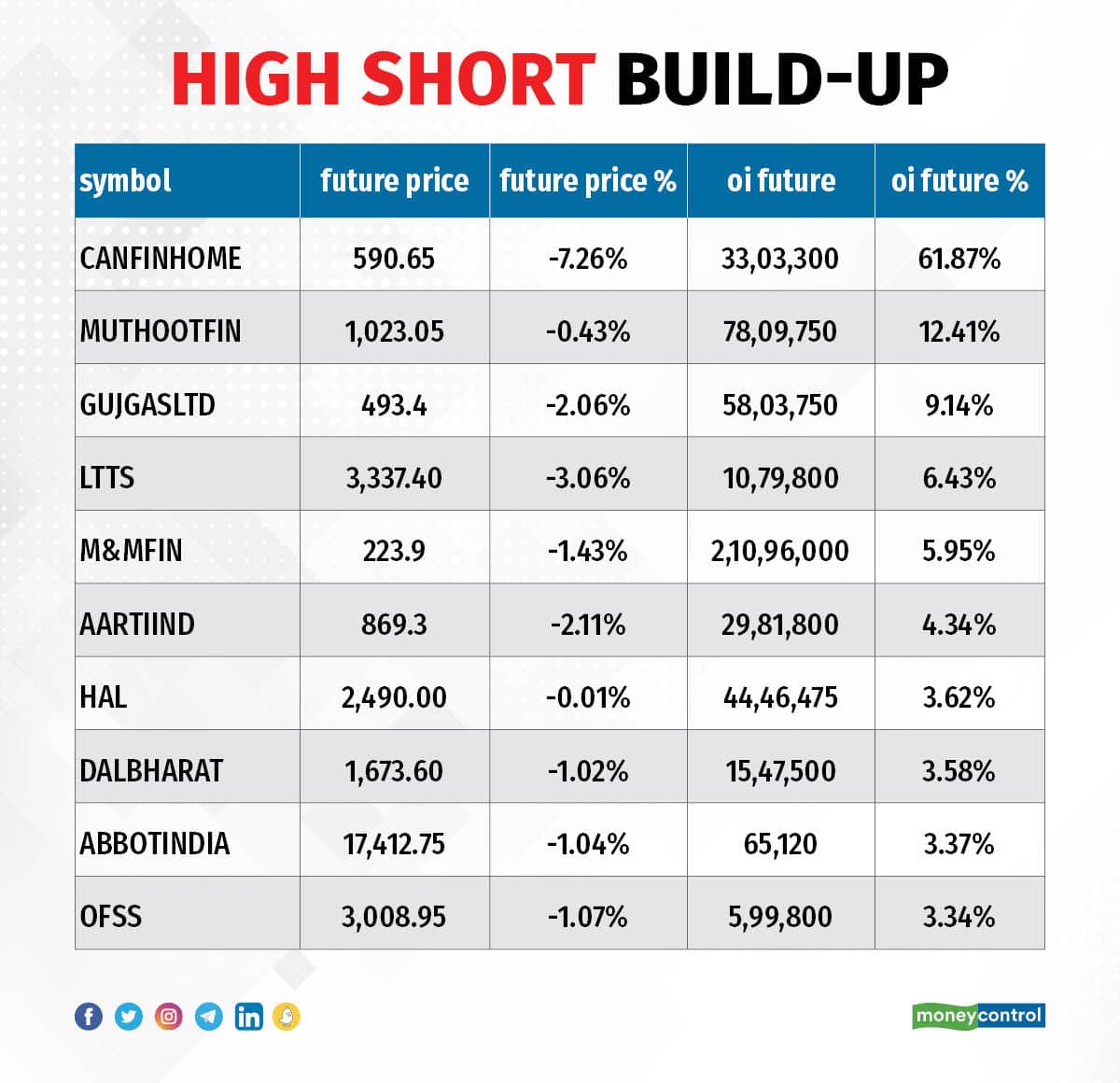 A decrease in open interest, along with an increase in price, mostly indicates a short-covering. Based on the open interest future percentage, here are the top 10 stocks - in which short-covering was seen include India Cements, Nifty Financial, Astral, Lupin, and Bajaj Auto. 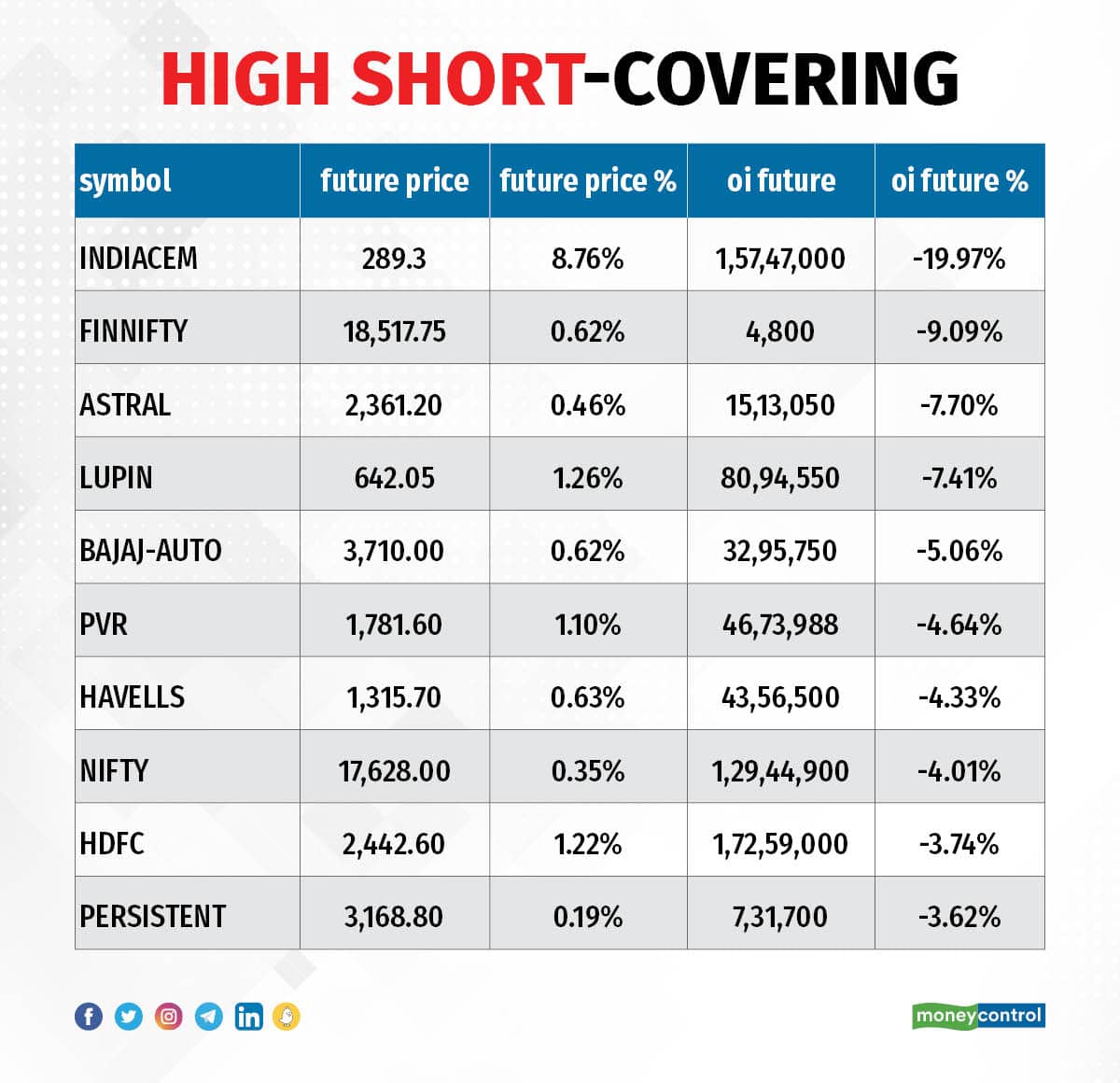 Krishna Institute of Medical Sciences: Investor General Atlantic Singapore KH Pte Ltd further sold 12.1 lakh shares (1.5 percent stake) in the company at an average price of Rs 1,250 per share. However, ICICI Prudential Life Insurance Company was the buyer for those shares at the same price. Adani Enterprises: The company has raised Rs 100 crore by allotment of 1,000 non-convertible debentures of face value of Rs 10 lakh each on a private placement basis. The said MLD will be listed on the Wholesale Debt Market segment of BSE.

Ugro Capital: The company said the board of directors will consider raising funds by issuance of non-convertible debentures on a private placement basis on September 22.

Natco Pharma: The pharma company is allowed to launch Chlorantraniliprole (CTPR) and its formulations, through its non-infringing process. It has received an order from the High Court of Delhi to launch the same. CTPR technical is formulated into broadspectrum insecticides used across a wide range of crops for pest management. Natco estimates the current market size of CTPR-containing products in India to be over Rs 2,000 crore.

Ceat: The company said the Board of Directors has allotted non-convertible debentures (NCDs) on a private placement basis aggregating to Rs 150 crore.

Future Supply Chain Solutions: The company has called off a proposal to sell or dispose of warehouse assets, and has decided to explore other opportunities for rehabilitation of business operations.

Ircon International: The stock will be in focus as the company has received a work order of detailed engineering and project management consultancy services for the development of rail infrastructure for Ananta OCP of Jagannath Area at Talcher, from Mahanadi Coalfields. The total value of the order is Rs 256 crore.

Butterfly Gandhimathi Appliances: Promoter Crompton Greaves Consumer Electricals is going to sell 10.72 lakh equity shares or a 6 percent stake in the subsidiary via offer for sale on September 20 and September 21. The floor price for the sale will be Rs 1,370 per share.

Bombay Dyeing and Manufacturing Company: The company said the board of directors on September 22 will consider a proposal of raising funds by issue of equity shares.

Disclaimer: The views and investment tips expressed by investment experts on Moneycontrol.com are their own and not those of the website or its management. Moneycontrol.com advises users to check with certified experts before taking any investment decisions.
Sunil Shankar Matkar
Tags: #Market Cues #Market Edge #Nifty #Sensex #Trade Setup
first published: Sep 19, 2022 10:02 pm