"The market is buoyant due to positive expectation from the Union Budget and a possible improvement in the trajectory of Q3 earnings growth. The IT sector has provided a good start to the season and FIIs are maintaining its risk-on strategy with positive inflows in the emerging markets (EMs), expecting no hike in the US Fed rate and improvement in the economies of

However, experts are of the view that investors should stay light as the probability of consolidation is much higher at current levels, but the overall trend still remains on the upside.

Maximum call open interest (OI) of 27.02 lakh contracts was seen at the 12,500 strike price. It will act as a crucial resistance level in the January series.

Maximum put open interest of 45.90 lakh contracts was seen at 12,000 strike price, which will act as crucial support in the January series.

The board of Birla Precision Tech will meet on January 14 to consider and approve the preferential issue of shares.

Infosys: The company partnered with France-based GEFCO to support its digital transformation.

Indag Rubber: ICRA reaffirmed the long-term rating of A and short-term A1 to the company's LOC, with a stable outlook.

Allahabad Bank: The bank has revised downward the MCLR by 05 basis points (bps) for one month MCLR tenor.

Next Mediaworks: The company reported a loss of Rs 3.66 crore for the quarter ended December 31, 2019, against the profit of Rs 21 lakh reported in the same quarter of the previous year. 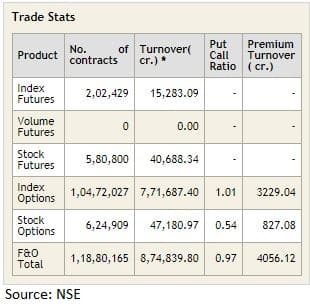 Yes Bank is under the F&O ban for January 14. Securities in the ban period under the F&O segment include companies in which the security has crossed 95 percent of the market-wide position limit.