Indian equity benchmarks broke the gaining streak of the last three consecutive sessions with Sensex and Nifty settling in the red on December 16 after a choppy session.

A long negative candle was formed today with a gap up opening, which indicates the formation of the dark cloud cover type candle pattern. Technically, the formation of such a pattern at the swing highs or near the hurdles could indicate further weakness in the market ahead.

"The short-term trend of Nifty indicates, it is on the verge of a downward reversal. A sustainable move below 12,000 could open up more weakness ahead. The key overhead resistance to be watched is around 12,150-200 levels," said Nagaraj Shetti, Technical & Derivative Analyst, HDFC securities.

Maximum call open interest (OI) of 24.58 lakh contracts was seen at the 12,000 strike price. It will act as a crucial resistance level in the December series.

Maximum put open interest of 42.31 lakh contracts was seen at 12,000 strike price, which will act as crucial support in the December series.

The respective boards of Sterling Tools, Pulsar International, Jyothi Infraventures and Dhanvarsha Finvest will meet on December 17 for general purposes.

The board of Ingersoll Rand (India) will meet on December 17 to consider and approve a special dividend.

The board of Aditya Vision will meet on December 17 to consider and approve the company's audited financial statements for the half-year ended as on September 30, 2019.

JM Financial: The company will consider fundraising by the way of issue of equity shares or any instrument. 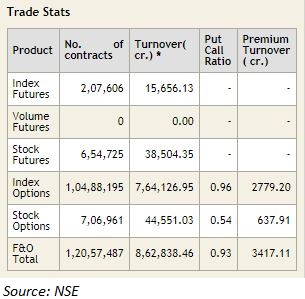 Yes Bank is under the F&O ban for December 17. Securities in the ban period under the F&O segment include companies in which the security has crossed 95 percent of the market-wide position limit.