Bulls regained control of the Indian market after two consecutive days of defeat as the market barometer scaled a fresh high on November 25.

Positive global cues, MSCI rejig, consistent buying by foreign investors, as well as some bit of short coverings ahead of F&O expiry, are the factors, experts said, that kept the market in the higher territory.

After the consolidation phase of the last three weeks, Nifty managed to close above its immediate hurdle of 12,035. It is now eyeing to touch a new record high.

"We observe a formation of a long bull candle at the new swing high of 12,083 levels. Technically, this pattern indicates an upside breakout attempt of the sideways range of the last eight to 10 sessions. Nifty is currently placed at the key resistance point of 12,050-12,100 and a sustainable move above this area could pull Nifty towards the new all-time high of 12,300 levels in the next one week," said Nagaraj Shetti, Technical Research Analyst at HDFC securities.

Mazhar Mohammad, Chief Strategist – Technical Research & Trading Advisory, Chartviewindia.in, told Moneycontrol that it is critical for Nifty to sustain above 11,919 levels to retain bullish bias as the current positive momentum shall fade away below this.

The maximum call open interest (OI) of 29.78 lakh contracts was seen at the 12,000 strike price. It will act as a crucial resistance level in November series.

No call writing was seen on November 25.

The maximum put open interest of 50.48 lakh contracts was seen at 12,000 strike price, which will act as crucial support in the November series.

Overall, 90 stocks witnessed long buildup on November 25. Based on the open interest (OI) future percentage, here are the top 10 stocks in which long buildup was seen.

A decrease in open interest, along with an increase in price, mostly indicates a short covering. Based on open interest (OI) future percentage. Here are the top 10 stocks in which short-covering was seen.

The broad of Anupam Finserv will meet on November 26 to consider and approve the company's quarterly results.

The broad of Aditya Vision will meet on November 26 to consider and approve the buyback of shares.

The broad of Poojawestern Metaliks will meet on November 26 to consider a bonus issue and increase in authorised capital.

Zee Entertainment: The company has appointed three new independent directors in lieu of two independent and one nominee director of Essel Group. Also, Subhash Chandra stepped aside as the chairman of the company.

Goodyear India: The company will close its manufacturing operations of Ballabgarh plant, Haryana from November 25-30.

MOIL: Shares will turn ex-date on November 26 for the proposed buyback and the record date for share buyback issue is November 27.

Setco Automotive: CARE revised credit rating on the company's long-term bank facilities to B from BB with a negative outlook. 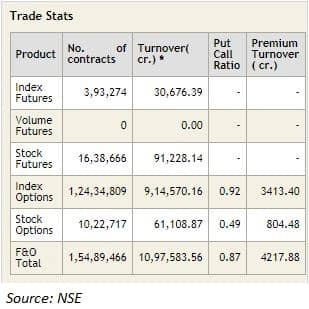 There is no stock under the F&O ban for November 26. Securities in the ban period under the F&O segment include companies in which the security has crossed 95 percent of the market-wide position limit.