Yes Securities said after the 11 percent correction from the record high, Nifty has touched its two-year mean levels, these levels are intact since January 2017.

The market extended the sell-off seen last week, falling sharply across sectors (except IT) on August 5 after the Centre decided to revoke Article 370 in Jammu & Kashmir and due to aggravated trade war tensions dragged Chinese yuan to 11-year low against the US dollar.

"The near term trend of Nifty continues to be negative. A formation of Hammer type candle pattern could raise some hopes for bulls to come back. But, unless the Nifty shows strength to sustain the gains or any confirmation of upside reversal, we are unlikely to see any upside bounce in the market," Nagaraj Shetti, Technical Research Analyst at HDFC Securities told Moneycontrol.

Yes Securities said after the 11 percent correction from the record high, Nifty has touched its two-year mean levels; these levels are intact since January 2017. "Follow-up action near such important support levels need to be closely watched. Improvement in internal breadth & stability is required for any sustained recovery to set-in."

The broader markets underperformed frontliners with the Nifty Midcap index falling 1.4 percent and Smallcap index declining 2 percent. All sectoral indices except IT ended in the red.

Maximum Call open interest (OI) of 22.13 lakh contracts was seen at the 11,500 strike price. It will act as a crucial resistance level in August series.

Maximum Put open interest of 29.96 lakh contracts was seen at 11,000 strike price. It will act as a crucial support level in August series. 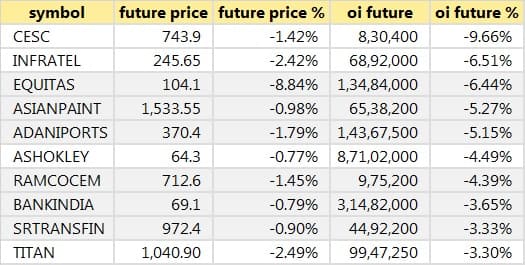 RITES: Company will announce its June quarter earnings on August 13.

Navkar Corporation: Earnings call will be held on August 8 to discuss the financial performance for Q1 FY20.

Solara Active Pharma Sciences: Company, as part of investors engagement activities, has scheduled a conference call with the investors and analysts on August 13 to discuss its Q1 financial results.

Bank Of Baroda: Lender cut MCLR by 15 bps across tenors.

Muthoot Finance: Board to mull raising funds on August 12.

IL&FS Transportation Networks: Company defaulted in payment of interest due on non-convertible debentures.

IOL Chemicals & Pharmaceuticals: Company made the pre-payment of a term loan of Rs 14 crore due to banks in addition to the regular repayment schedule.

SRF: Company approved the project for setting up of an integrated facility for the development of PTFE at an estimated cost of Rs 424 crore.

For August 6, not a single stock is under the F&O ban period.

Securities under the ban period under the F&O segment include companies in whose security has crossed 95 percent of the market-wide position limit.