Benchmark indices Sensex and Nifty ended in the red for the seventh consecutive session on March 2 as concerns over coronavirus continued to weigh on investor sentiments.

D-Street witnessed one of the most volatile sessions in the recent past, a 1000-point swing that wiped out most of the gains made on the Sensex while Nifty50 held onto its crucial support at 11,100 levels.

Broader markets performed in line with benchmark indices as the S&P BSE Midcap index was down 0.65 percent while the S&P BSE Smallcap index fell 0.77 percent.

Maximum call open interest (OI) of 14.29 lakh contracts was seen at the 11,500 strike price. It will act as a crucial resistance level in the March series.

Maximum put open interest of 23.51 lakh contracts was seen at 11,300 strike price, which will act as crucial support in the March series.

The board of Max Financial Services will meet on March 3 to consider and approve the preferential issue of shares.

Mahindra Lifespace: Arm Mahindra World City got the nod for partial de-notification of the notified area under SEZ.

KSK Energy: CoC passed a resolution through e-voting to proceed for liquidation of the company.

Ramco Industries: CRISIL reaffirmed its A1+ rating on the company's commercial paper. 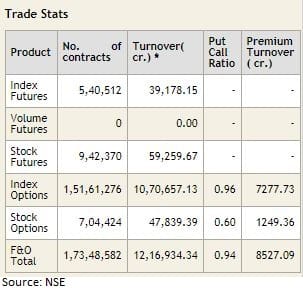