Benchmark indices saw a good start with the Sensex gaining more than 160 points amid consolidation on July 15, but it was a bad day for broader markets as the Nifty Midcap index fell 0.8 percent.

The sectoral trend was mixed with Nifty IT index gaining nearly 3 percent and Pharma 1 percent but Bank and FMCG lost half a percent each.

"Nifty has a strong resistance near 11,650-zone. As long as the index trades below said levels we may see profit booking on every rise. Any close above 11,650-zone can lead to good short covering which in turn may push the index towards 11,700-11,750 zones," said Rohit Singre, Senior Technical Analyst at LKP Securities.

According to Nagaraj Shetti, Technical Research Analyst, HDFC Securities, "This pattern indicates a rangebound movement in the market with positive bias. The Nifty currently shows a gradual up move amidst a choppy trend in the last five sessions. This strength of an upside bounce compared to previous sharp weakness (long range bear candle) of 5th and 8th July possibly signals a 'dead cat bounce' in the market."

Shetti said the upper area of 11,625-11,650 levels is going to be strong overhead resistance for the market ahead. Failure to sustain above 11,650 could result in a sharp reversal on the downside.

Shabbir Kayyumi, Head of Technical Research at Narnolia Financial Advisors said Nifty future's close above daily weighted average price (VWAP) indicated that buyers remained active on the lower side. "As long as Nifty is trading above 11,550 levels, short term move can extend towards the aborted top of 11,640 levels.

Maximum Call open interest (OI) of 32.01 lakh contracts was seen at the 12,000 strike price. It will act as a crucial resistance level for the July series. Maximum Put open interest of 24.52 lakh contracts was seen at 11,300 strike price. It will act as a crucial support level for the July series. 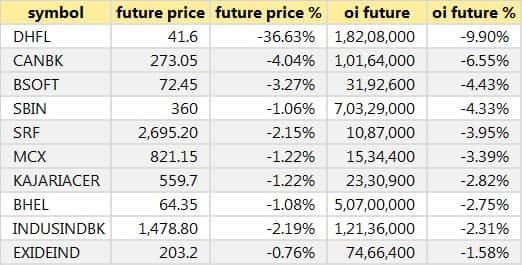 Bank of Baroda: Company will announce its June quarter earnings on July 25.

Security and Intelligence Services: Company will announce its June quarter earnings on July 24.

Cipla: Company will announce its June quarter earnings on August 7.

Adani Transmission: Company's officials will meet analysts/investors in a non-deal roadshow on July 17.

Hindustan Zinc: Earning call to be held on July 19.

Brigade Enterprises: Company recommended issue of bonus shares in the ratio of 1:2 and to issue 42.75 lakh warrants convertible into 42.75 lakh shares at Rs 269 per share to the promoter group.

Ashok Leyland: Pantnagar plant to be shut from July 16 to July 24 due to weak demand.

Capacite Infraprojects: Board meeting of the company is scheduled for July 19 to consider fundraising by way of an issue of further capital.

HDFC Bank: Board will mull a special dividend on July 20.

For July 16, DHFL, IDBI Bank, Reliance Capital and Reliance Infrastructure are under the F&O ban period.