Based on the open interest future percentage, there were 96 stocks including Info Edge India, City Union Bank, Kotak Mahindra Bank, Sun Pharma and Voltas in which a short build-up was seen.

The market declined 2.5 percent in the opening trade but the recovery in the initial hour, which was followed by rangebound trade, helped the benchmark indices settle with a 1.5 percent loss on August 29. Global markets were also under pressure after Federal Reserve Chair Jerome Powell in his speech at Jackson Hole reiterated that the rate hikes to bring inflation to 2 percent target are going to continue at the cost of pain to consumers and businesses. The rising oil prices also weighed on sentiment.

The BSE Sensex tanked 861 points to 57,973, while the Nifty50 fell 246 points to 17,313 but formed a bullish candle on the daily charts as the closing was higher than opening levels.

"Technically, this market action signals a sharp downside momentum. The unfilled opening downside gap of Monday could be considered as a bearish breakaway gap and if this gap remains unfilled for the next few sessions then that could mean the market is in the middle of a downtrend, signalling more weakness ahead," Nagaraj Shetti, Technical Research Analyst at HDFC Securities said.

The negative sequence of lower tops and bottoms is confirmed and the present weakness could be in line with the formation of the new lower bottom (lower bottom reversal needs to be confirmed). Immediate resistance is at 17,400 levels, the market expert said.

The broader markets also came under pressure, but the correction compared to benchmarks was less. The Nifty Midcap 100 and Smallcap 100 indices declined 0.8 percent and 1 percent respectively. The volatility also increased significantly with India VIX climbing by 8.82 percent to 19.82 levels, making the trend favourable for bears.

The Nifty Bank lost more than 700 points to 38,277, but formed a bullish candlestick pattern on the daily charts on Monday. The important pivot level, which will act as crucial support for the index, is placed at 38,015, followed by 37,753. On the upside, key resistance levels are placed at 38,468 and 38,659 levels.

Maximum Call open interest of 20.44 lakh contracts was seen at 18,000 strike, which will act as a crucial resistance level in the September series.

Maximum Put open interest of 36.32 lakh contracts was seen at 16,000 strike, which will act as a crucial support level in the September series.

A high delivery percentage suggests that investors are showing interest in these stocks. The highest delivery was seen in Ipca Laboratories, Sun Pharma, Bajaj Auto, Power Finance Corporation, and REC, among others. An increase in open interest, along with an increase in price, mostly indicates a build-up of long positions. Based on the open interest future percentage, here are the top 10 stocks including Hindustan Copper, Colgate Palmolive, India Cements, Escorts, and Max Financial Services, in which a long build-up was seen. A decline in open interest, along with a decrease in price, mostly indicates a long unwinding. Based on the open interest future percentage, here are the top 10 stocks including Piramal Enterprises, Can Fin Homes, Bank of Baroda, Eicher Motors, and IndusInd Bank, in which a long unwinding was seen. An increase in open interest, along with a decrease in price, mostly indicates a build-up of short positions. Based on the open interest future percentage, here are the top 10 stocks including Info Edge India, City Union Bank, Kotak Mahindra Bank, Sun Pharma, and Voltas, in which a short build-up was seen. 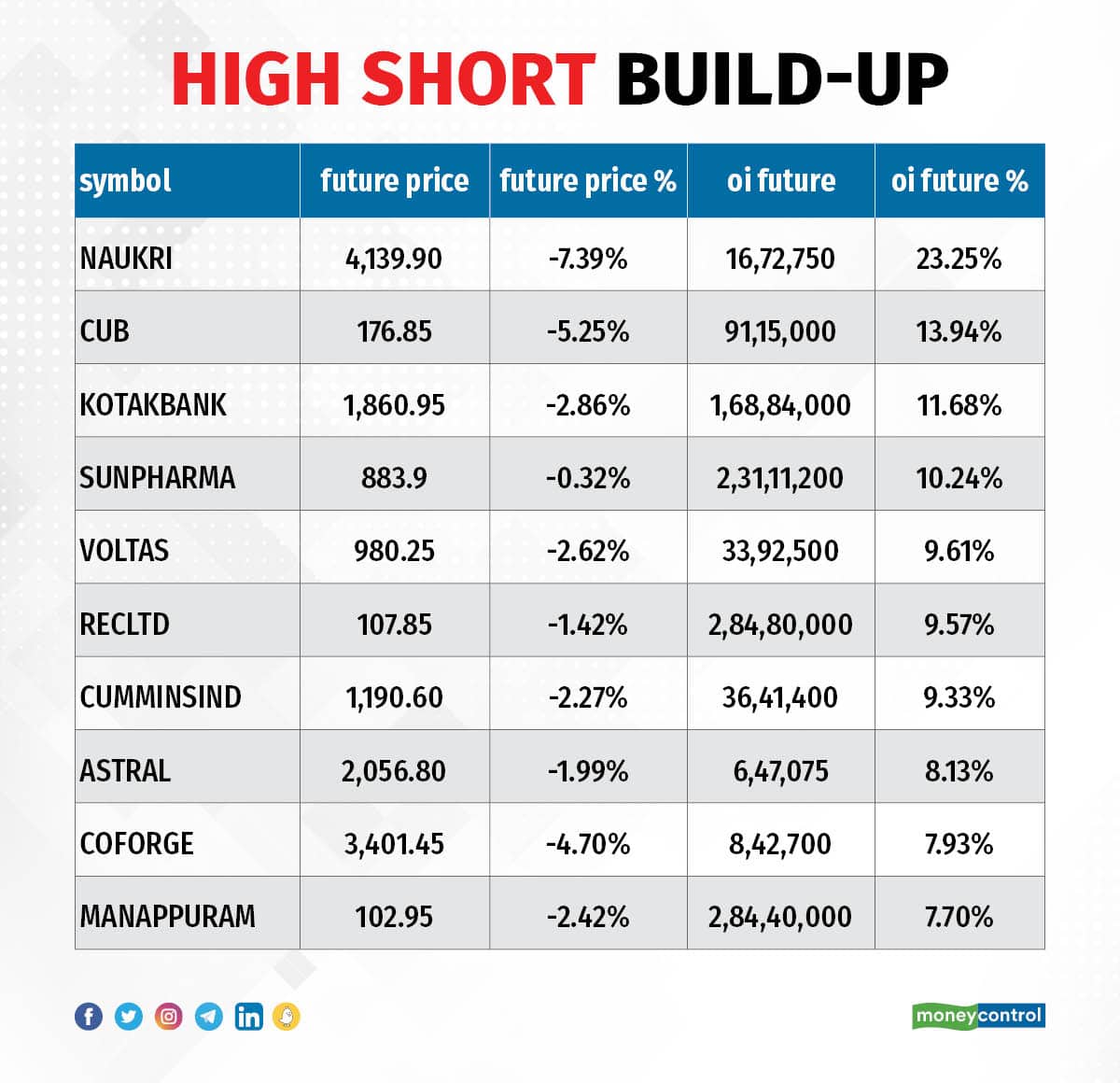 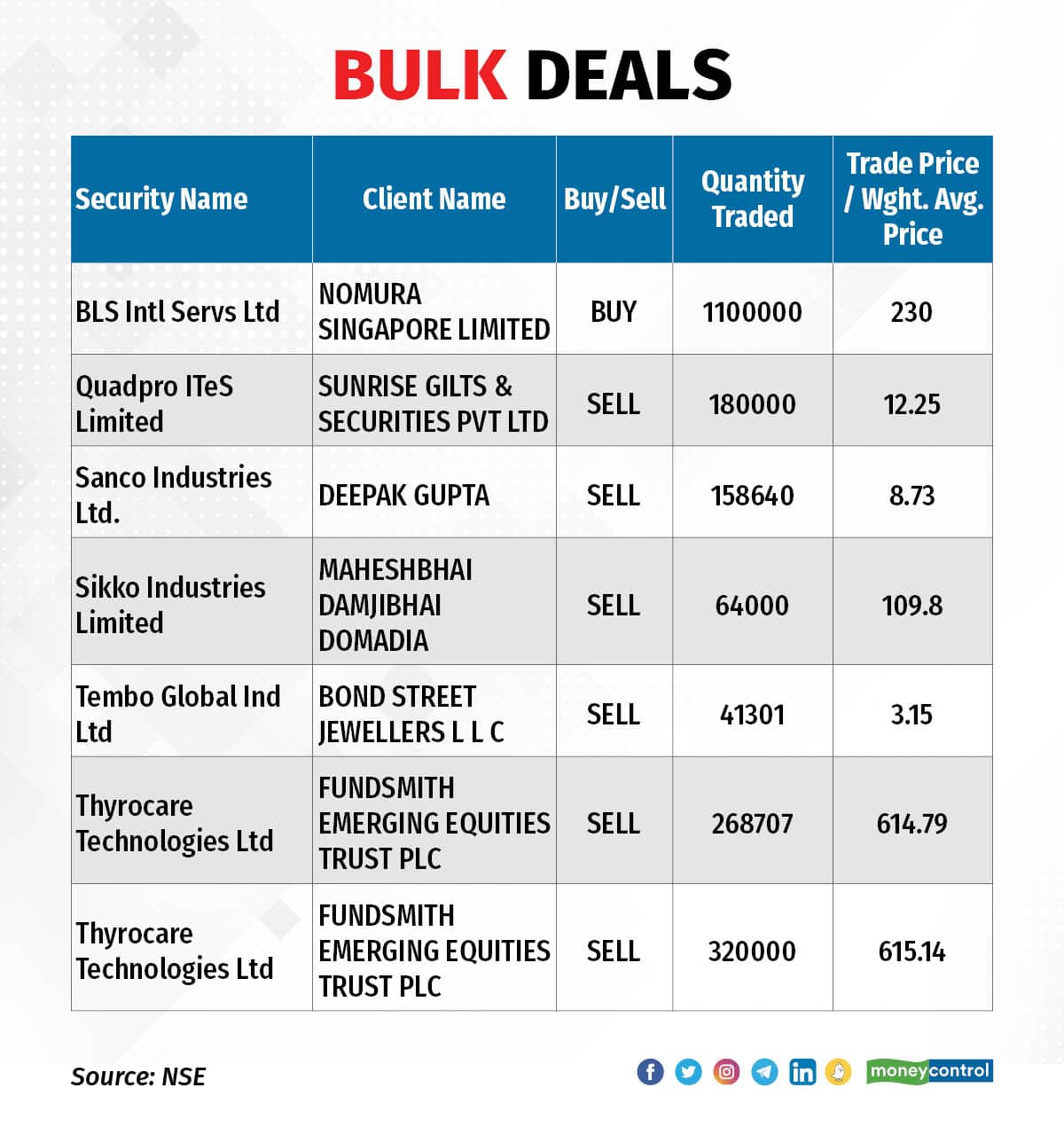 SRF: Management will be interacting with certain institutional investors and analysts.

KEI Industries: Officials of the company will meet CLSA India.

One 97 Communications: Officials of the company will meet institutional investors and analysts.

Patanjali Foods: Officials of the company will interact with investors.

India Pesticides: Officials of the company will meet Grandeur Peak.

Ugro Capital: The company said the Board of Directors has made an allotment of 50,000 non-convertible debentures having a face value of Rs 10,000 each, through private placement. The tenure of instrument is 24 months from the date of allotment and the coupon rate is 10.35 percent per annum.

BC Power Controls: The company has received board approval for the issuance of 1.1 crore equity shares, on a preferential basis, to the promoter group category at a price of Rs 5.65 per share. The total fundraising was Rs 6.21 crore.

Krishna Institute of Medical Sciences: The company has entered into a definitive agreement to acquire a majority stake (51 percent) in SPANV Medisearch Lifesciences, Nagpur. SPANV is running a multi-speciality hospital - Kingsway Hospitals, having over 300+ beds. Existing promoters and shareholders will continue to hold the balance 49 percent stake. Post-acquisition, the hospital will be renamed 'KIMS Kingsway Hospitals'.

Orient Cement: Franklin Templeton Mutual Fund sold 1.52 lakh equity shares or 0.07 percent stake in the cement company on August 26. With this, it reduced its stake in the said company to 3.12 percent, down from 3.2 percent earlier.

Star Housing Finance: The Coronation Castles Pvt Ltd has offloaded a 0.07 percent stake in the company via open market transactions on August 26. With this, its stake reduced to 0.06 percent, from 0.13 percent earlier.

As we are in the beginning of September series, there is not a single stock getting added in F&O ban list for August 30 as well. Securities in the ban period under the F&O segment include companies in which the security has crossed 95 percent of the market-wide position limit.

Disclaimer: The views and investment tips expressed by investment experts on Moneycontrol.com are their own and not those of the website or its management. Moneycontrol.com advises users to check with certified experts before taking any investment decisions.
Sunil Shankar Matkar
Tags: #Market Cues #Market Edge #Nifty #Sensex #Trade Setup #video
first published: Aug 29, 2022 10:16 pm