Based on the open interest future percentage, there were 50 stocks including Torrent Power, Nifty Financial, L&T Finance Holdings, Indian Oil Corporation, and RBL Bank, in which short-covering was seen.

The market lost half a percent on July 25 after rising nearly five percent in previous six consecutive sessions, dragged by auto, pharma, select banks, FMCG and financial services stocks. The market seems to be cautious ahead of Federal Reserve's policy meeting.

The BSE Sensex fell more than 300 points to 55,766, while the Nifty50 declined 88.5 points to 16,631 and formed a Doji kind of pattern on the daily charts, indicating indecisiveness among bulls and bears.

"The momentum indicator RSI (relative strength index) has given a bearish hinge at overbought level which is confirming slowdown in positive momentum of the index," said Vidnyan Sawant, AVP - Technical Research at GEPL Capital.

As per the overall chart set up, "we may see some correction in the Nifty till 16,359 levels in the coming future. Our corrective view will be negated if it sustains above 16,793 levels on the closing basis," Vidnyan said. The broader markets also ended in red with the Nifty Midcap 100 index falling 0.09 percent and Smallcap 100 index declining 0.6 percent on weak market breadth, while the India VIX, the fear index, rose by 6.18 percent to 17.68 levels, making the trend favourable for bears.

Maximum Call open interest of 88.78 lakh contracts was seen at 17,000 strike, which will act as a crucial resistance level in the July series. Maximum Put open interest of 64.34 lakh contracts was seen at 16,000 strike, which will act as a crucial support level in the July series.

A high delivery percentage suggests that investors are showing interest in these stocks. The highest delivery was seen in ICICI Lombard General Insurance, Siemens, HDFC Life Insurance, Power Grid Corporation of India, and Marico, among others. 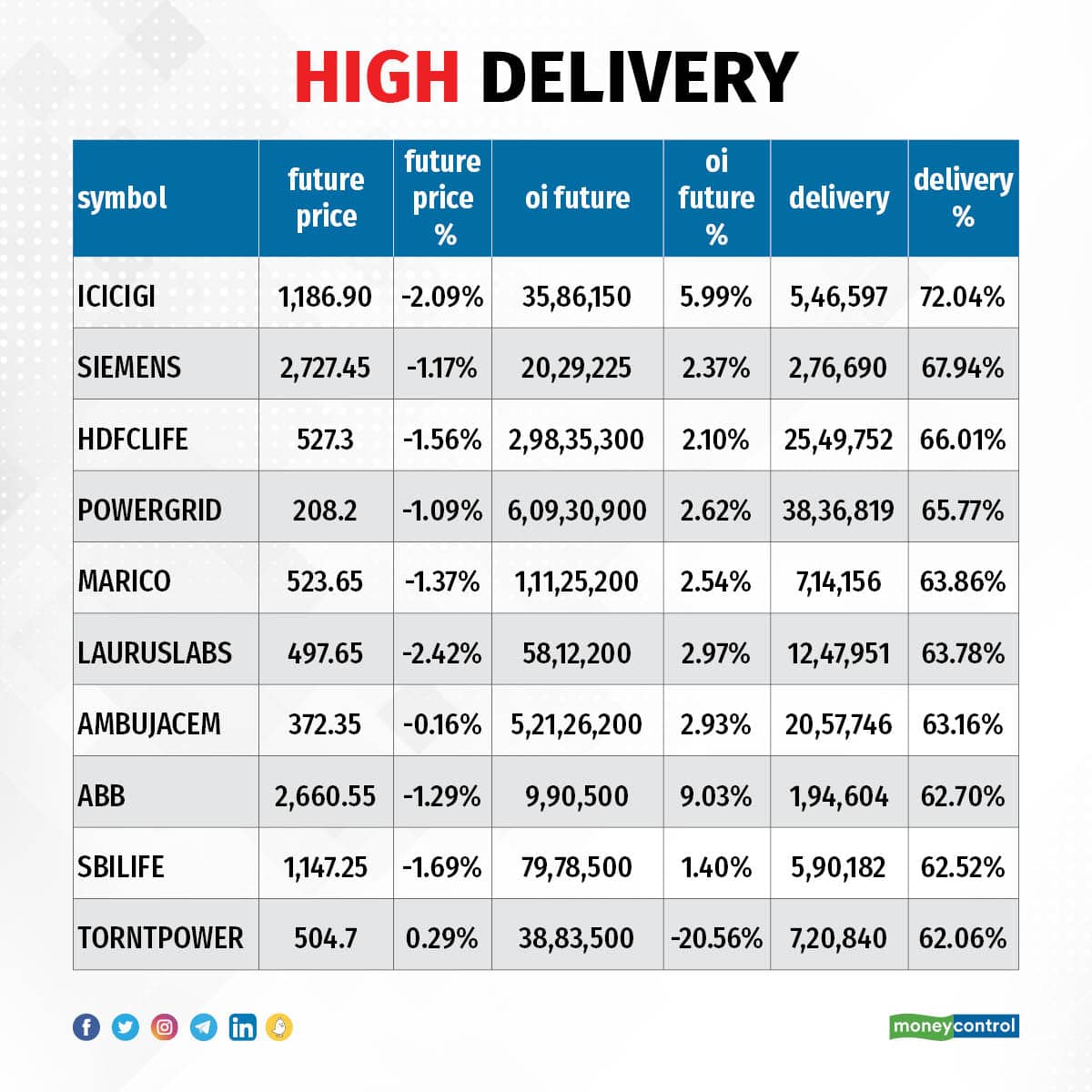 An increase in open interest, along with an increase in price, mostly indicates a build-up of long positions. Based on the open interest future percentage, here are the top 10 stocks including Navin Fluorine International, NTPC, Max Financial Services, Intellect Design Arena, and Indian Hotels, in which a long build-up was seen. A decline in open interest, along with a decrease in price, mostly indicates a long unwinding. Based on the open interest future percentage, here are the top 10 stocks including Bank Nifty, Bajaj Auto, Ramco Cements, Ipca Laboratories, and Voltas, in which long unwinding was seen. 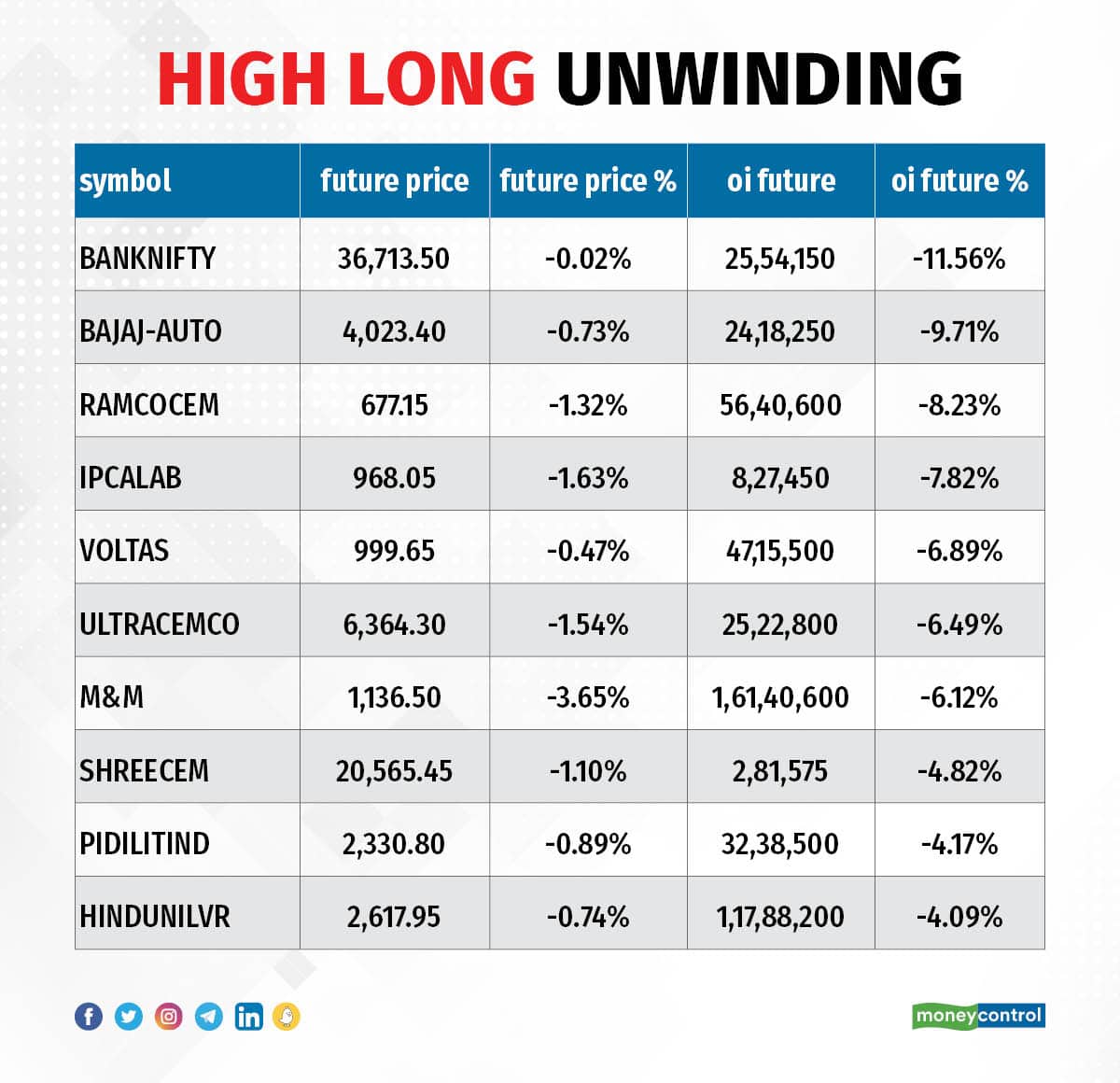 An increase in open interest, along with a decrease in price, mostly indicates a build-up of short positions. Based on the open interest future percentage, here are the top 10 stocks including Dalmia Bharat, Mahanagar Gas, Escorts, United Breweries, and Ashok Leyland, in which a short build-up was seen. A decrease in open interest, along with an increase in price, mostly indicates a short-covering. Based on the open interest future percentage, here are the top 10 stocks including Torrent Power, Nifty Financial, L&T Finance Holdings, Indian Oil Corporation, and RBL Bank, in which short-covering was seen. Tata Steel: The company has reported nearly 13 percent year-on-year decline in consolidated profit at Rs 7,765 crore for the quarter ended June 2022, impacted by higher input cost and tax expenses. Revenue during the quarter increased by 18.6 percent YoY to Rs 63,430 crore during the quarter. Consolidated EBITDA stood at Rs 15,047 crore, despite the sharp rise in input costs especially coking coal and gas prices in Europe, down by 7 percent YoY.

Lupin: The pharma company has received approval from US FDA for its abbreviated new drug application (ANDA), Azilsartan Medoxomil tablets, to market a generic equivalent of Edarbi tablets of Azurity Pharmaceuticals Inc, in the US. The product will be manufactured at Lupin’s facility in Nagpur, India.

Tanla Platforms: The company reported a 4 percent year-on-year decline in profit at Rs 100.4 crore for the quarter ended June 2022, dented by weak operating performance. Revenue was strong, rising 27.7 percent to Rs 800.1 crore during the same period. EBITDA fell by 2.8 percent to Rs 130.70 crore and margin contracted to 16.3 percent from 21.5 percent in the same period.

Macrotech Developers: The real estate company has recorded a 69 percent year-on-year growth in profit at Rs 271.26 crore for the quarter ended June 2022, driven by strong topline growth. Revenue grew by 66.67 percent to Rs 2,675.75 crore in the same period. It was the best ever first quarter with Rs 2,814 crore of pre-sales from its India business. One stock - Indiabulls Housing Finance - is under the NSE F&O ban list for July 26. Securities in the ban period under the F&O segment include companies in which the security has crossed 95 percent of the market-wide position limit.

Disclaimer: The views and investment tips expressed by investment experts on Moneycontrol.com are their own and not those of the website or its management. Moneycontrol.com advises users to check with certified experts before taking any investment decisions.
Sunil Shankar Matkar
Tags: #Market Cues #Market Edge #Nifty #Sensex #Trade Setup #video
first published: Jul 25, 2022 09:36 pm